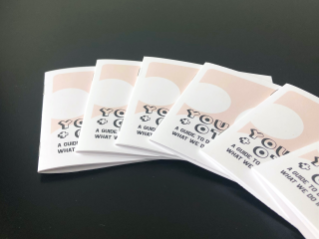 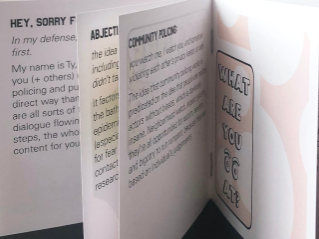 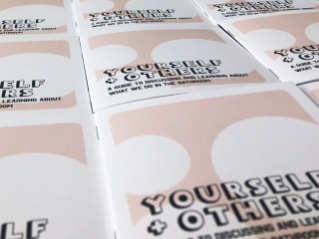 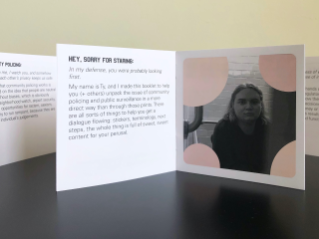 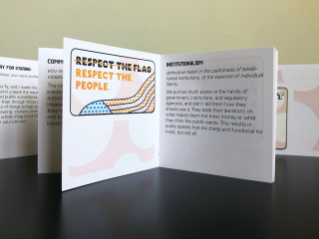 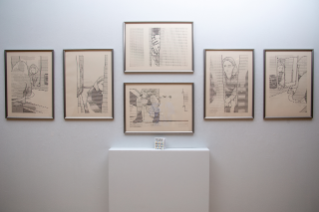 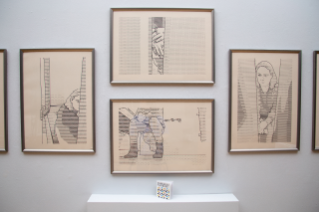 Much of my work deals with violence, trauma, and conflict. I translate this sort of content through print, the acts of pushing and pressing, smearing and scraping. I see print as conflict itself: myself versus the process. We fight over what the final product will look like. I tell it what to do, I push the ink through, but what comes out is not just mine to own.

This piece details another kind of conflict, around my identity as a nonbinary trans person. I, and millions1 of other trans, nonbinary, intersex, and gender variant people are exposed to tiny acts of aggression, the most common being surveillance in the public restroom.

The public restroom has historically been a place where bigotry, racism, and majority rule take precedent over individual rights to public space and privacy. Segregation based on gender, race, ability status, sexual identity, and class have been – or still are - practiced by governments and corporations to determine who should be thought of when designing for public spaces. These institutions base their idea of the public need on popular opinion of the day. Nothing will change with bathroom accessibility and accommodation until we begin to acknowledge and address our enforcement of these norms, these segregations, and begin to signal to them we want to see something different.

Myself + Others takes a small, everyday act of surveillance and elevates it to high art. This accomplishes the dual purpose of causing an audience to reconsider their participation in surveillance, and signifying it as an act of aggression, of enforcement. The subject in these prints meets your gaze, suspending the moment of contact, and begins to question your need to surveil.

The prints themselves are made mechanically, from dot patterns and simple linework. The eye scrutinizes, working hard to form and understand the image, in the same way we look intensely at others in public space, watching to ensure their adherence to norms, and therefore protecting ourselves from the unknown.

The collateral material, Yourself + Others, spreads the message of the piece to the places and people in question. The stickers, meant to be displayed in any and all public space, challenge the norms and rules that have been used for so long to justify surveillance and community policing. Defining terminology helps aid in discussions of underlying themes of the piece and the issue.

When it comes to our body, everyone has something they’d like to hide.