The Russian program is part of the Department of World Languages and Cultures in the BGSU College of Arts and Sciences. 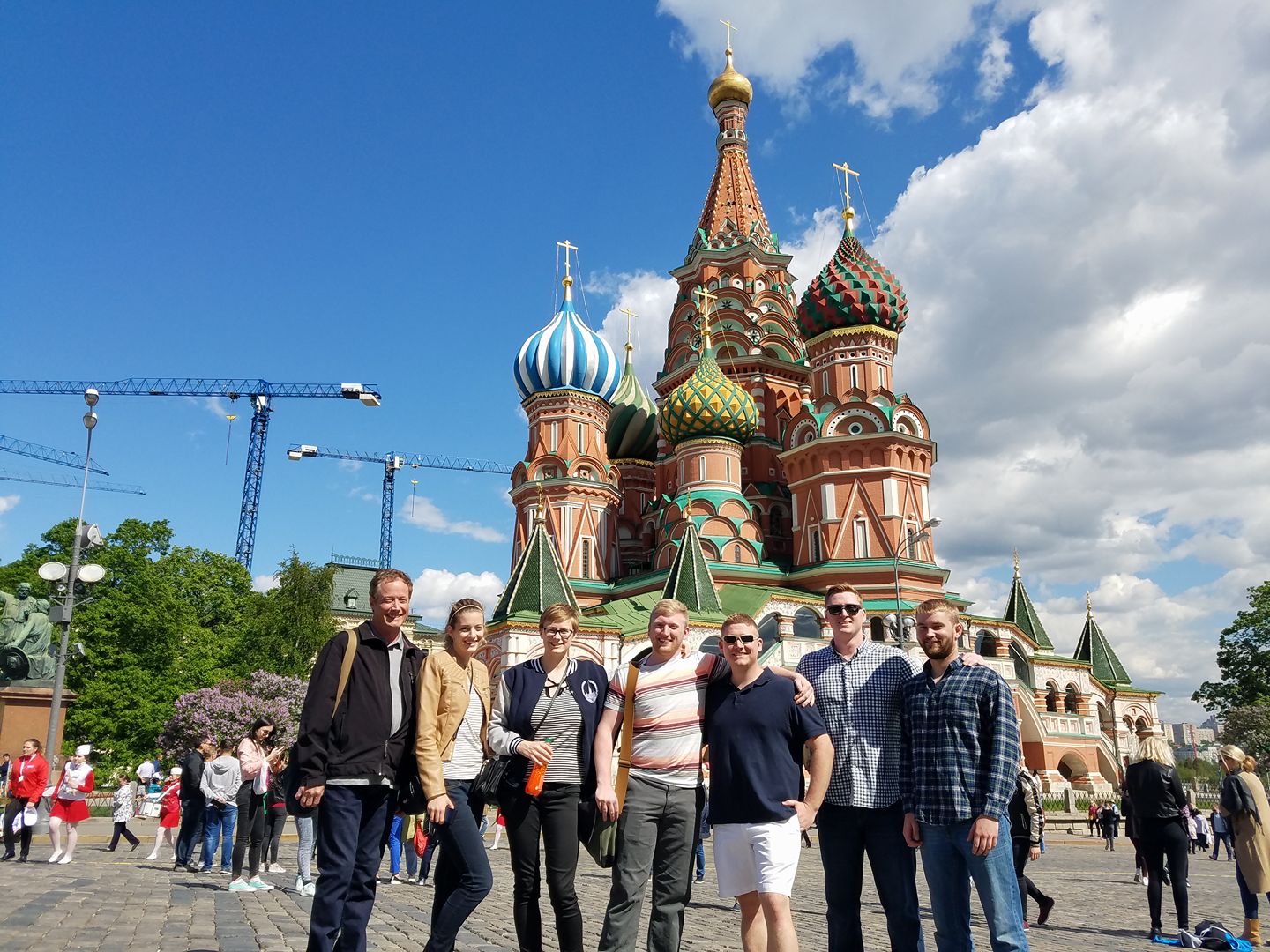 BGSU is the only public institution in northern Ohio to offer a full, four-year degree program in Russian culture and language. Russian studies lead to a deep understanding of the culture and heritage of over 200 million people. Russian is also the lingua franca in much of Central Asia and the Caucasus region. The lands where Russian is spoken stretch from the Pacific Ocean to East Central Europe.

Students with interests in China, Germany, Japan, and other countries may enhance their credentials with knowledge of Russian culture and language. A major or minor in Russian from BGSU is a window into a large region with a complex and fascinating history and culture.

BGSU Russian studies majors have the opportunity to experience Russia with a popular summer study abroad program in Moscow and St. Petersburg.

The need for individuals competent in Russian is expanding in both the public and private sectors. There are many benefits of learning a second language and the career opportunities are varied and exciting.

For much of the twentieth century, opportunities for study, tourism, and trade in Russia were limited.

In the decades following the end of the Soviet Union, Russia’s international commercial and cultural ties grew rapidly. Events since 2014 have curtailed many of these connections, but they stand to be renewed in the future.

With less than 3,000 students in the U.S. completing even one year of Russian studies each year during the past two decades, there are going to be opportunities for ambitious individuals in the future.

The BGSU Russian major explores the language, traditions, strong history and literature of Russia. Studying these bring the Russian language to life and provide perspectives through which this vibrant country can be critically examined.

BGSU Russian majors have the opportunity to study abroad in Moscow and St. Petersburg.

The BGSU Bachelor of Arts in Russian is one of the few four-year programs in the study of Russian language and culture, and one of the best in Ohio.

Students can take courses with no previous knowledge of Russian or receive advanced placement if they have sufficient background in the language. The four-year Russian language and culture core program features intermediate to advanced-level courses in reading, translation and Russian for business and journalism. The program also has six culture and literature courses – in English and Russian. Film and poetry courses are available as well.

Students are able to take advantage of many learning facilities including an excellent library and Language Learning Center. In addition to teaching necessary language skills, the BGSU Bachelor of Arts in Russian equips students with the skills to critically examine another culture and understand the differences and similarities to their own.

Russian majors may choose to compete in the Undergraduate Russian Language Olympiada. This competition is an opportunity for Russian language students from all over Ohio to practice and show off their Russian speaking skills.

Russian major students have the chance to direct their independent research into Russian culture and its manifestations in arts, family and social life, folkways and religion of the region.

Mastery of independent thinking skills is encouraged by frequent undergraduate research projects. Many students have published papers, presentations and conference posters to their names when they graduate.

The BGSU Russian Summer Study Abroad program is located in Moscow and Saint Petersburg. The Moscow part of the program is hosted by the Center for International Education at Moscow State University.

The center is internationally renowned for its language and culture programs. The program concludes with a weeklong stay in Saint Petersburg during the White Nights. Students from all universities are welcome to take part in the program.

The need for individuals competent in Russian is expanding rapidly in both the public and private sectors. Despite opportunities opening up for Americans with Russian language skills, the number of qualified candidates is declining. Therefore, BGSU graduates proficient in Russian have good career prospects.

Some of these fields require additional professional training, but international specialization in these fields is impossible without Russian language and culture skills. 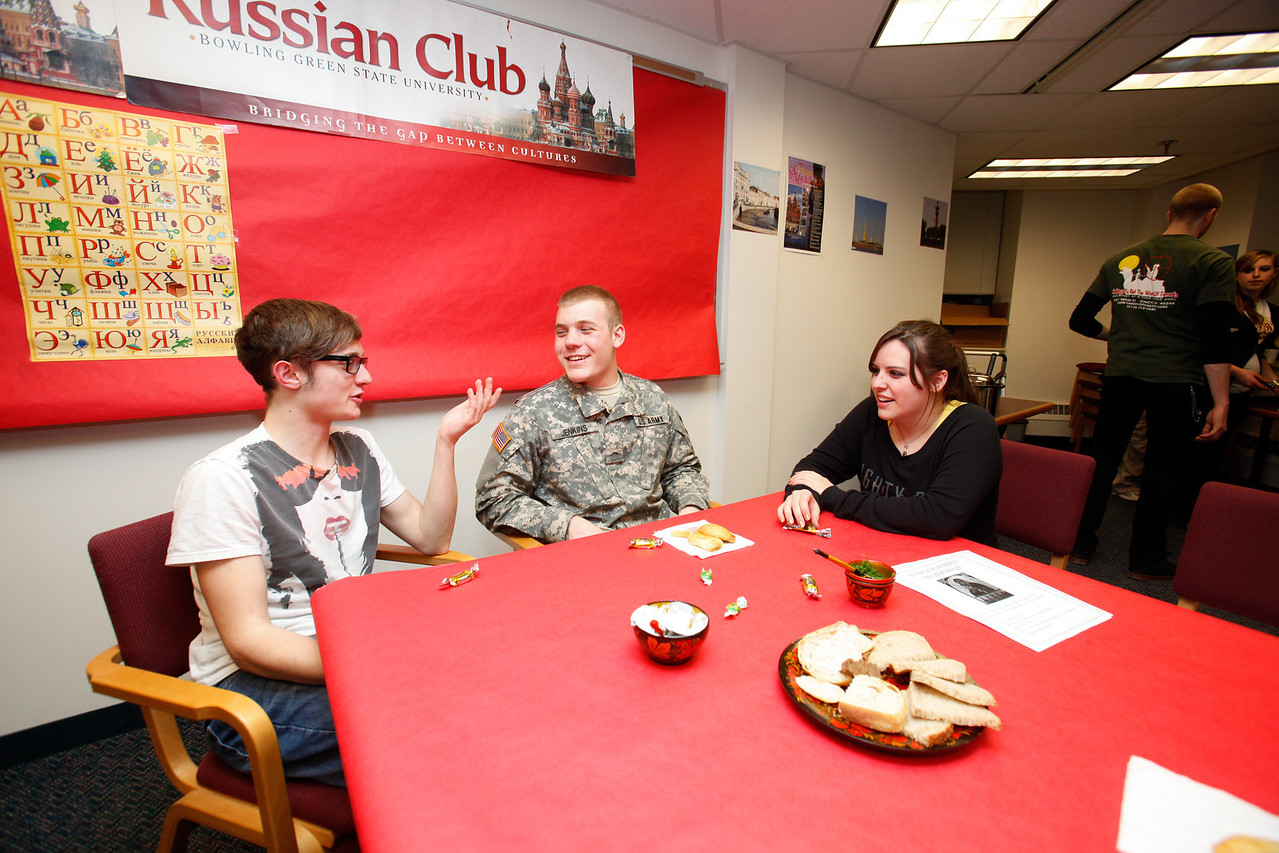 The Russian program is part of the Department of World Languages and Cultures in the BGSU College of Arts and Sciences.

The BGSU Russian Club is an organization for students to experience and learn more about Russian culture through games, music, films, food and more. All students and alumni, regardless of major, are welcome to join.

BGSU's chapter of the Dobro Slovo National Slavic Honor Society is the Gamma Sigma chapter. A campus chapter was established at Berkeley on October 29, 1926, to recognize academic excellence among students of Slavic languages and cultures. In 1963, the honor society was founded with the help and encouragement of the American Association of Teachers of Slavic and East European Languages. The society recognizes academic excellence in Slavic studies. Since 1963, it has grown steadily in the number of chapters and distinguished members.

Upon completion of the baccalaureate degree, students in Russian are expected to be able to:

The Russian program went through Program/Cluster Review during the Academic Year 2016-17.

Requirements for licensure, certification and/or endorsement eligibility vary greatly from one profession to another and from state to state. The Russian program does not lead to professional licensure.