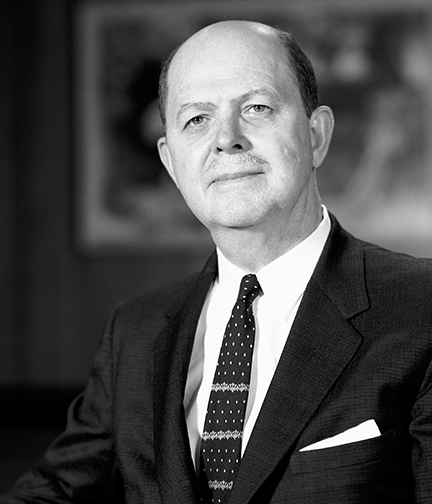 Following Dr. Prout’s retirement in 1951, Dr. Ralph McDonald became Bowling Green State University’s fourth president. During Dr. McDonald’s presidency, student enrollment nearly doubled and the total campus acreage more than doubled, increasing from 240 acres to 600 acres. Over the course of his ten-year term, he oversaw the construction of ten new buildings and the renovation of many others.

At the outset of Dr. McDonald's presidency, lack of on-campus housing was a major problem. In response to this need Rodgers, Founders, and Conklin Quadrangles and the Alice Prout Residence Hall were constructed. In addition, the University Union, Memorial Hall (housing Anderson Arena), West Hall and Kuhlin Center (South Hall) were completed. By the end of Dr. McDonald’s term, all but one of the temporary buildings put in place during World War II had been eliminated or replaced. The total cost of all the building construction and renovation during Dr. McDonald’s term amounted to almost $35 million.

In the years following the second World War, Americans' attitudes about and expectations for higher education began to change. Dr. McDonald’s experience and qualifications marked him as someone who would move Bowling Green State University from its traditional role as a teacher training college to a full-fledged liberal arts university, preparing its graduates for leadership in a troubled and complex world. With this goal in mind, Dr. McDonald sought to increase the number of faculty holding Ph.D. degrees who were active in research and publication, in addition to classroom teaching. In fact, over half of the faculty were replaced with individuals with more training during these years. While this transition was painful, the university community generally saw the change as necessary. At the same time, however, there was a movement at universities across the nation aimed at providing faculty and students with greater liberty and opportunities to influence university policy. In contrast, Dr. McDonald viewed the role of university president as strongly authoritative. Controversies inevitably flared from time to time, and faculty and student morale suffered. Over the years, the situation worsened, culminating in student demonstrations in 1961 and numerous faculty petitions. In the end, Dr. McDonald resigned the office of president in 1961.

Ralph Waldo McDonald was born March 1, 1903 in Gallatin County, Illinois. He earned his Bachelor’s degree in 1925 from Hendrix College in Conway, Arkansas. At Duke University, he earned both his Master's and doctoral degrees (1933, in educational psychology) and attended law school, later serving as a member of the North Carolina legislature. A member of Phi Beta Kappa and active in many professional associations relating to higher education, Dr. McDonald served as executive secretary of the Department of Higher Education of the National Education Association for seven years before accepting the presidency at BGSU.

The Board of Trustees approved a leave of absence for Dr. McDonald following his resignation and retained his position as a professor of higher education. After leaving the university, he served as executive director of the National Committee for the Support of Public Schools in Washington, D.C. Upon his retirement from that position in 1965, he and his wife lived in Florida for ten years, retiring to Arkansas in 1975. Dr. McDonald died in January, 1977.

McDonald Quadrangle is named in honor of Dr. McDonald and his wife Athleen Taylor McDonald.