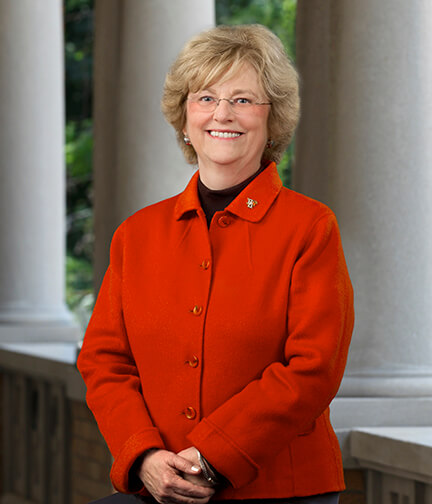 Mary Ellen Mazey became the 11th president of Bowling Green State University on July 1, 2011. Under her leadership, BGSU experienced a renaissance. Enrollment grew as the University welcomed its most academically well-prepared classes in history. Dozens of classrooms and facilities were renovated, constructed or improved to ensure the campus community was a premier learning environment. Dr. Mazey led capital projects that will position BGSU for decades, including the Michael & Sara Kuhlin Center and major renovations to University and Moseley halls. She successfully ushered in the University’s second comprehensive fundraising campaign, whose goals are primarily securing funds for student scholarships, professorships and leadership positions, facilities and colleges, schools and programs.

During her tenure, BGSU’s national and global profile was greatly enhanced. In line with its emphasis on public and private partnerships, BGSU collaborated with the Ohio Attorney General to bring the Bureau of Criminal Investigation crime laboratory to campus, with Wood County Hospital to establish the Falcon Health Center, and with regional leaders to focus on economic development. In addition, she signed agreements to develop new pathways for prospective students to access a BGSU education and created new academic programs to serve the region.

President Mazey was deeply committed to student success and fostering a unique BG experience. Her vision prepared BGSU students to enter the workforce and change lives for the world. During her tenure, BGSU launched an internship guarantee, increased its focus on undergraduate and graduate research and reshaped its commitment to fostering tomorrow’s leaders through experiential learning.

Dr. Mazey has served as a consultant on strategic planning and as an evaluator for the Higher Learning Commission. She chaired and led the board of the Western Collegiate Hockey Association and the Mid-American Conference Council of Presidents. In addition, she served on APLU's Voluntary System of Accountability Board, Ohio Inter-University Council, Toledo Chamber of Commerce and the Northwest Ohio Regional Growth Partnership.

Prior to assuming the presidency at BGSU, she served as Provost and Vice President of Academic Affairs at Auburn University, as Dean of the Eberly College of Arts and Sciences at West Virginia University, and as Dean of the College of Liberal Arts at Wright State University. In 1996-97, she had an Intergovernmental Personnel Assignment and served as Director of the Office of University Partnerships at the U.S. Department of Housing and Urban Development. A first-generation college graduate, Dr. Mazey earned bachelor’s and master’s degrees from West Virginia University and a Ph.D. in geography from the University of Cincinnati.

In recognition of her passion, innovation and leadership for the University, the BGSU Board of Trustees granted her the title of President Emeritus in December 2017.