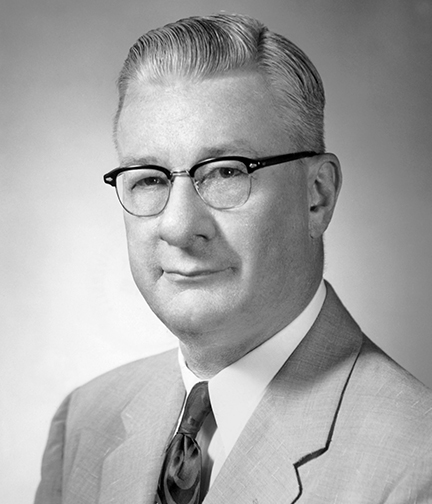 Following the controversial presidency of Dr. Ralph McDonald, the Board of Trustees elected Dr. Ralph Harshman to be president. Dr. Harshman was the first university president at Bowling Green State University to have come from the ranks of university staff. He had been a faculty member and administrator here for 27 years, beginning in 1936. He had served as professor of business administration, the first Dean of the Schmidthorst College of Business, Dean of Administration, and Vice President. He had been retired for a year before the Board of Trustees chose him, and he agreed to return for a term of two years. Upon taking office, Dr. Harshman acted swiftly to ease the unrest among students and faculty alike.

During his short term as president, Dr. Harshman instituted a number of policies aimed at improving faculty morale and instilling faith in the University. He began decentralizing the administration with policies delegating more authority to the college deans. He also invited faculty cooperation in the selection of department chairs and new deans for the Colleges of Liberal Arts and Education. In many ways, his position as a faculty member prior to becoming president gave him a deeper understanding of how to run the university more harmoniously.

Dr. Harshman also worked to restore student morale, largely through the creation of the Committee on Student Affairs. The creation of this committee went a long way toward showing the students that the Board of Trustees, the administration, and the faculty had a genuine interest in their concerns. During his presidency, he went out of his way to improve the administration’s relationship with the students.

Ralph Garling Harshman was born November 6, 1893 near Williamstown, Hancock County, Ohio, the son of Will and Alberta Harshman. He received his Bachelor’s degree in 1917 from Ohio Northern University, going on to receive both his Master’s and his Ph.D. from the Ohio State University in 1926 and 1933, respectively. Beginning his career at BGSU in 1936 as an assistant professor of business administration, he eventually became the Dean of the College of Business. As dean, he oversaw an enrollment explosion as the college grew from fifty-one students in 1937 to over 1,400 following the Second World War. Under his leadership, BGSU gained full membership in the American Association of Collegiate Schools of Business in 1954. In 1963, Dr. Harshman was awarded the “Scroll of Appreciation” by the US Air Force, the highest honor that service may confer upon a civilian educator.

Harshman Quadrangle is named in his honor.