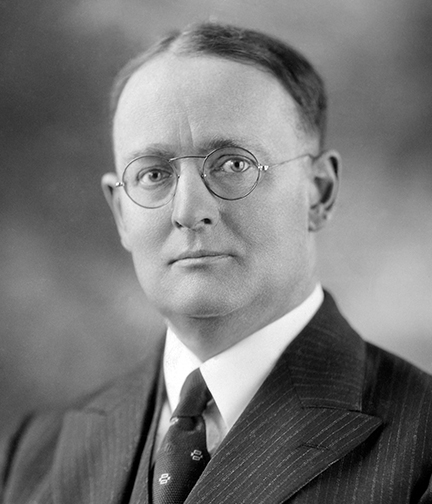 After the unexpected death of BGSU's second president, Roy Offenhauer, Frank J. Prout was selected to lead the university. Prout had served as the Superintendent of Sandusky, Ohio City Schools from 1921-1939 and had been a member and President of the University's Board of Trustees, giving him vital experience in serving the needs of students and educators in northwest Ohio. During his twelve-year term, he guided the campus through the difficult years of the Second World War and oversaw the development of BGSU as it changed from a teachers' college to a university. Dr. Prout gained a reputation for getting things done and was popular among both faculty and students. Many felt he brought a personal touch to the office of president.

World War II caused the student population to decrease drastically as many students were drafted or enlisted in the military. The deflated enrollment meant the university would not be able to pay its faculty. The most viable solution was to secure government training programs. Under Prout’s leadership, the university was chosen as the site for the Navy College Training Program, also known as the V-12 program. With this program in place, the university's financial problems were almost entirely solved. Instead, however, there was a shortage of housing.

Dr. Prout ensured that BGSU would be able to handle the increased housing needs caused by the V-12 program during the war as well as the increased enrollment of the post-war era. He took advantage of legislation that allowed universities to issue bonds for building dormitories. Kohl Hall had been financed in this way before he became president. As a result, several more dormitories were constructed, including Rodgers Hall, and BGSU was able to handle the population increase, while the number of permanent buildings on campus increased to fifty.

The university's national reputation rose thanks to Dr. Prout’s leadership. The construction of cottage-style housing on campus (now known as fraternity and sorority rows), enticed national Greek organizations to accept local fraternities and sororities as chapters. In addition, Bowling Green State University made the transition from being a normal college dedicated to training teachers to that of a state university with a wider variety of educational and training offerings. The Graduate College was also founded during this time. By the time of Prout's retirement, enrollment had nearly quadrupled and the total campus acreage doubled from pre-war figures.

Frank J. Prout was born in 1883 at Prout’s Station, in north central Oxford Township, Erie County, Ohio. He received his Bachelor’s degree from Ohio Wesleyan University in 1906. He taught at Ohio Wesleyan and Zanesville High School until 1914 when he became principal of Chillicothe High School. Widely respected in the academic community, he received honorary degrees from Ohio University (1919), Ohio Wesleyan University (1924), Miami University (1951), and Bowling Green State University (1952). Dr. Prout served on BGSU's Board of Trustees from 1933 until his selection as president in 1939. After his retirement in 1951, Dr. Prout continued to maintain an active interest in the university, serving as an advisor to his successor, Dr. Ralph McDonald. Prout's love of gardening translated into a continued involvement with the university’s landscaping.

Prout Chapel is named for him. His wife, Alice, was a very popular university "first lady" and a women's dormitory, Alice Prout Hall, was named for her.