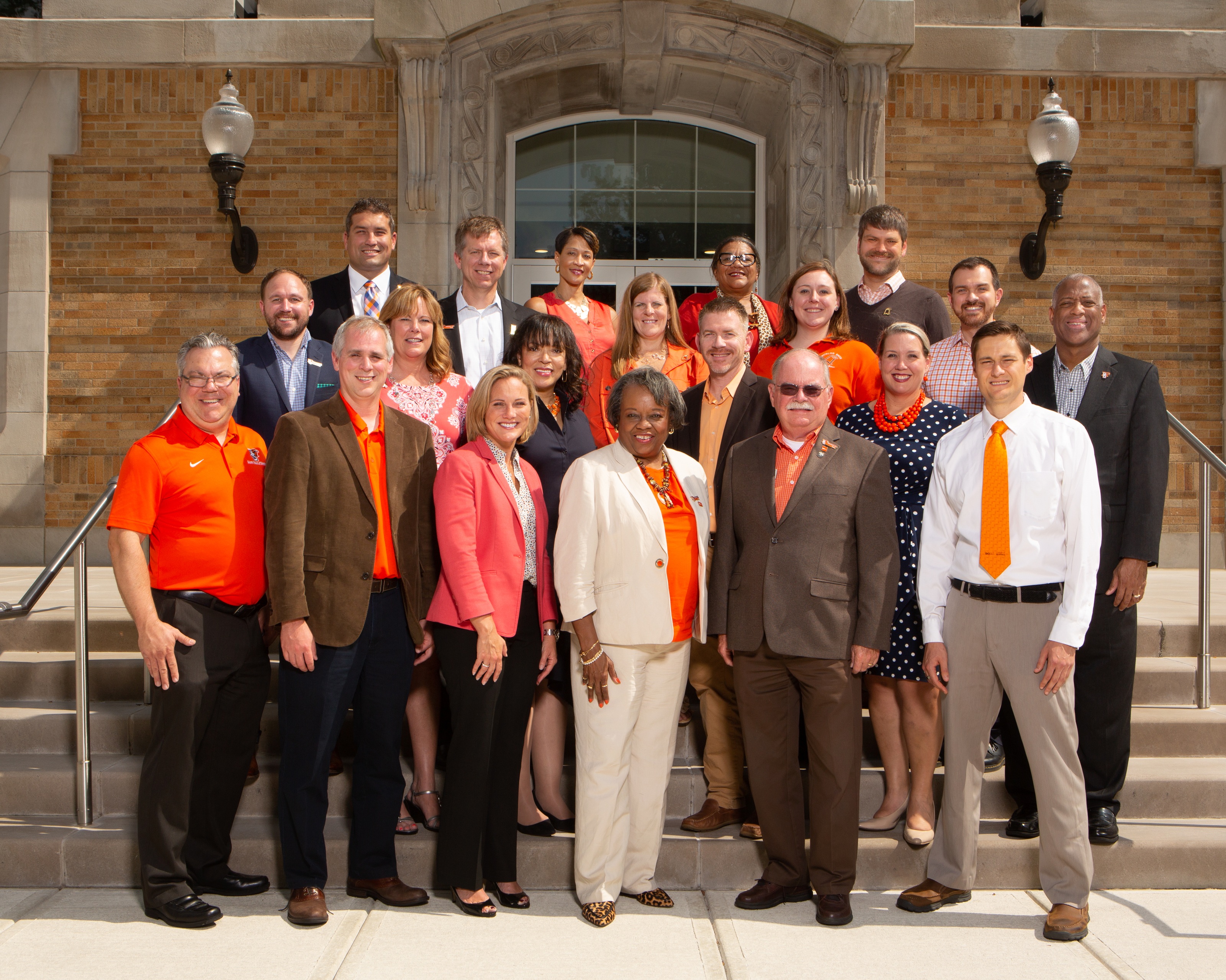 A member of the Alumni Board of Directors is appointed to hold the position based on demonstrated involvement, support and commitment to BGSU and the Alumni Association. In accepting this four-year appointment, the member agrees to fulfill the requirements and meet the responsibilities associated with board membership. These include, but are not limited to:

Outside of her professional time, Alison is involved with the Rotary Club of Perrysburg, serving as President. In addition, Alison serves Rotary in Public Image and Marketing in multiple states across the Midwest. In 2016, Alison was named one of Rotary’s 40 Young Professionals under the age of 40 for an area encompassing over 60,000 Rotarians in the Midwest and Canada.

Alison also volunteers for Girl Scouts of Western Ohio and is a board member for the Fort Meigs YMCA and Girls on the Run of Northwest Ohio. In 2012, Alison was selected as a Toledo 20 Under 40 Award recipient. She has called Perrysburg home since 2007 with her daughters, Abigail and Mackenzie.

Martha Oakes earned a Bachelor of Science degree in Marketing from BGSU in 1986.  Following graduation she started working for Westfield Insurance, one of the 50 largest property and casualty insurance companies in the United States.  Martha left Westfield in June 2017, after 31 years with the company.  At the time of her departure she led the Middle Market & Specialty Lines underwriting and sales teams.  Martha served as a trustee of the Ohio Insurance Institute for 10 years, including terms as the vice chairman and presidential search committee chairman.  She has also served as a board member for Project Learn of Medina County, and as the Funds Committee chair of Jerusalem Lutheran Church.  Martha received the YWCA of Cleveland’s Women of Professional Excellence award in 2007 and was named one of Business Insurance Magazine’s Women to Watch in 2008.  Martha currently serves on the women's leadership team at Northside Christian Church and resides in Westfield Center, Ohio with her husband, Greg, and their daughter, Sarah.

Rob Furia graduated with a bachelor’s degree in Actuarial Science in 2012 and then began working as an actuary for Cincinnati Insurance near his hometown.  He completed the actuarial examination process in 2018, earning the Fellow of the Casualty Actuarial Society (FCAS) designation, and now works in the company’s reinsurance division pricing reinsurance contracts.

Rob was heavily involved in H2O Church at BGSU and has maintained that involvement at the University of Cincinnati location, where he has continued to mentor college students for the past 7 years.  Over that time, he has also been appointed as an elder in the church and has overseen the creation of a new ministry group aimed at young professionals and recent graduates.

Rob was an Alumni Laureate Scholar and had such a great BG experience that he recruited all 3 of his younger siblings to BGSU.  Two have already graduated with distinction while the youngest is still enrolled in undergraduate classes.

Charlotte McKenzie received a Bachelor of Science in Business Administration from BGSU. While at BGSU, she was a member of the Marketing Club, The Obsidian newspaper, and did advertising sales for the BG News.  She also has a Master of Science in Administration from Central Michigan University and was a member of the National Honor Society of Sigma Iota Epsilon. With more than 35 years of multifunctional experience in startup company environments and Fortune 500 companies, Charlotte recently retired as a Clinical Specialist from BTG, International, Inc. and was a recipient of BTG’s 2015-2016 Circle of Excellence award. She has also worked for Johnson & Johnson, Cor Therapeutics, Millennium Corporation, and Schering Plough. Her roles included new business development, executive training, team leadership, sales, and marketing.

An avid community volunteer, Charlotte currently is a member of the League of Women Voters/Collin County-Vice President of Programs, the National Black MBA Association, Dallas Women’s Foundation/XIX Society, The Links Incorporated, Junior League of Dallas, and AARP Advocacy Lead Team. She is also an ambassador for both The Arts Community Alliance (TACA) and Frisco Arts.

Alex Wright owns and operates Pure Barre boutique fitness studios throughout the Sacramento, California region along with his wife, Kristen Wright (07’).   Pure Barre is the largest barre fitness franchise in the country.  Prior to moving to California, Alex spent over six years at The Ohio State University in a variety of administrative roles.  White there, he primarily focused in off-campus real estate development and the implementation of the university’s long-term parking lease and concession agreement to outside operators.

Originally from Wapakoneta, Ohio, he is a 2006 summa cum laude graduate from BGSU with a Bachelor of Arts in Geography and Political Science, and he received a Juris Doctorate from The Ohio State University in 2009. While at BGSU, Alex was elected Undergraduate Student Government President, served on the Homecoming Committee, worked as a Campus Tour Guide, and was a member of Delta Chi fraternity and Phi Beta Kappa honor society. He and his wife are Falcon Flames and they were Freddie and Frieda Falcon during their time on campus. They have two sons, Luca and Zenzo, and reside in Rocklin, California.

Deidra Corbett-Ihlenfeld received a Bachelor of Science degree from BGSU in Education with emphasis in the area of Speech and Hearing Therapy in 1978. While at BGSU, she belonged to various organizations; Alpha Angel, Delta Sigma Theta, Third World Theater, Minority Affairs Screening Committee, and the BGSU Performing Dancers. She later went on to receive a Master of Arts degree in Communication (Organizational Communication Consulting) from Ohio University in 1990.

Since graduating from BGSU and until now, Deidra has remained involved in numerous community organizations. In 2002 she was recognized by the YMCA for the “Outstanding Woman of Achievement Award” and she was also recognized in 2009 by the Martin Luther King Jr. Foundation. Both awards were for her commitment to community service. Deidra and her husband served as foster parents for more than 15 years, and she’s been active in her school district having served on their Elementary School Vision Committee for the construction of a new school. More recently, Deidra is very occupied as President of the Board of Trustees for the Zanesville Day Nursery, a childcare center that she attended as a child, and one that’s been in business for 104 years! She is involved with local organizations to combat human trafficking, and she has been involved with the BGSU Black Alumni Committee for the last five years.  Deidra resides in Zanesville, Ohio with her husband (Michael), son (Kaleb) and daughter (Gabrielle).

Chase holds a Bachelor of Science in Technology and a Master of Education in Learning Design & Development from BGSU. As an undergraduate, he participated in the University Activities Organization, Visual Communication Technology Organization, Kappa Kappa Psi honorary band fraternity, Falcon Marching Band, and Athletic Band. As a graduate student, he co-taught Introduction to VCT and Photography I as a graduate teaching assistant, and he served on the Visual Communication Technology Programming Board and Graduate Students of Technology Organization, respectively. He currently serves on the Board of Directors for the BGSU Band Alumni Society.

Chase is the Enabling Technologies Informationist at the Taubman Health Sciences Library at the University of Michigan – Ann Arbor. His role involves managing technology projects and resources, consulting with faculty to effectively incorporate technology into their curriculum, supervising staff, serving on various committees, and identifying and building partnerships with instructional technology units throughout the university community.

Matt Maurer is the Senior Vice President at WasteZero, an innovative B Corp that combines service, product & technology to deliver next generation waste reduction programs resulting in over 6.7 million tons of landfill diversion, reaching over 6 million consumers annually and has saved cities over $1.6B. Prior to WasteZero, Maurer held various roles at Reynolds Consumer Products including leadership of the trash bag business, a $1B retail business encompassing Hefty Brands, Private Label and the Hefty EnergyBag Program. In addition to the base business marketing and advertising, Maurer was also responsible for business specific M&A and new ventures, product innovation and growth strategies.

He earned a bachelor’s degree in business administration from BGSU in 2006 and an MBA from the Kellogg School of Management at Northwestern University. At BGSU, Maurer also serves on the Schmidthorst College of Business Young Alumni Board and is a proud member of the Presidents Club and the Falcon Club. Outside of BGSU, Maurer is a past chairman of the board for directors for his National Fraternity, Alpha Sigma Phi and a co-founder of KAP Connect. He currently resides in Chicago with his wife, Molly ’07,  and their daughters Madison and Mackenzie.

Corey Minor Smith is a thought leader on housing and poverty breaking strategies. She is also a leading social justice advocate for mental health in communities across the nation. Smith produces radio roundtable conversations with youth and community members to discuss ways to reduce the stigma associated with mental illness. Smith has served as a keynote speaker at numerous national and international gatherings. She was a panelist during the Housing and Development Law Institute conference in Washington, DC. Smith also presented in Cape Town, South Africa during the Southern African Housing Foundation Conference as a delegate of the United States. After being directly involved in the mental health industry for over 20 years, Smith is a highly sought-after speaker and has been featured at conferences, on panels, TV, radio, podcasts and Sirius XM programs as an advocate for services and treatment for those living with mental illness. Smith has also written articles for blogs and on-line magazines in addition to using her highly celebrated debut book, #Driven, as a resource for family and friends that have loved ones living with mental illness.

Smith earned a bachelor’s degree of Arts in English and a master’s degree of Education in Guidance and Counseling from Bowling Green State University. She then earned her Juris Doctorate from the University of Toledo College of Law. In addition to being a member of the Ohio and Georgia bars, Smith is also licensed to practice before the United States District Court of the Northern District of Ohio. Currently, Smith serves as General Counsel for Stark Metropolitan Housing Authority of which she was once a resident. She has received numerous accolades and awards, including the Boy Scouts of America Buckeye Council Spirit of Scouting Award, She Elevates Woman of Courage Award, induction into the YWCA Women’s Hall of Fame, and was named an ATHENA International Women’s Leadership Finalist.

Smith also served as a Canton City Council at Large member after receiving the most votes out of five other candidates. She is the first African American to ever be elected to a city-wide position in Canton, OH. As a city council member, Smith focused on supporting community development block grant funds being allocated to address mental health issues among youth and enhancing community awareness about services and resources available in the community. Whether she is speaking at the lectern, holding forth in court, or conversing in dialogue in community centers across the country, Attorney Corey Minor Smith is well-versed speaker, thinker and community activist.