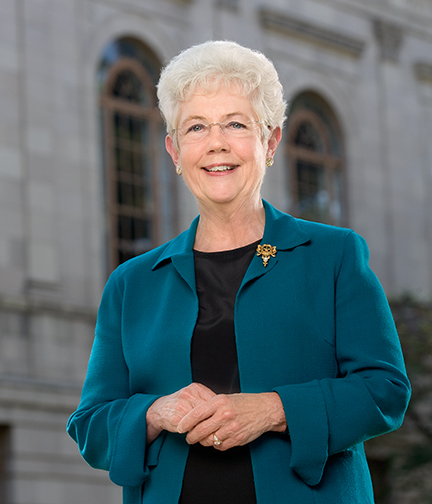 Dr. Carol A. Cartwright was the first woman to serve as president of Bowling Green State University. She was named president on January 6, 2009, after serving as interim president since July 2008. During her three years at BGSU, she created a new strategic plan, focused on improving campus facilities and enhancing the academic profile of the institution.

Dr. Cartwright’s career in higher education was distinguished by innovative teaching, pioneering research and national leadership. She became Kent State University’s 10th president – and the first woman president of a state university in Ohio – in March 1991. She retired as president in June 2006. Prior to her career at Kent State, she was vice chancellor for academic affairs at the University of California at Davis and dean for undergraduate programs and vice provost at The Pennsylvania State University.

Dr. Cartwright was a leading member of numerous regional and statewide civic and economic-development organizations, including the Greater Akron Chamber, the Northeast Ohio Council on Higher Education and NorTech. She co-chaired the Ohio Technology in Education Committee, which developed Ohio’s master plan for educational technology from preschool through graduate school. Her participation in initiatives to improve Ohio’s economy includes past service on the Governor’s Commission on Higher Education and the Economy. Dr. Cartwright has also served on the boards of directors of three companies with headquarters in northeast Ohio: KeyCorp and PolyOne Corp. of Cleveland and FirstEnergy Corp. of Akron.

The scope of her contributions to higher education led to Dr. Cartwright's induction into the Ohio Women's Hall of Fame in her first year of eligibility. She received Distinguished Alumni awards from the University of Wisconsin at Whitewater and the University of Pittsburgh; the Clairol Mentor Award in Education; the YWCA Greater Cleveland Women of Achievement Award; the Northeast Ohio ATHENA Award; and the March of Dimes Franklin Delano Roosevelt Humanitarian Award for Excellence. After announcing her retirement as president, she was honored throughout the region, state and nation, including receiving the title of President Emeritus from the Kent State University Board of Trustees. In addition, the Auditorium Building on the university’s Kent Campus was named Carol A. Cartwright Hall in her honor.

In June 2017, the BGSU Board of Trustees granted her the title of President Emeritus, in recognition of her outstanding career in education and her leadership of Bowling Green State University.