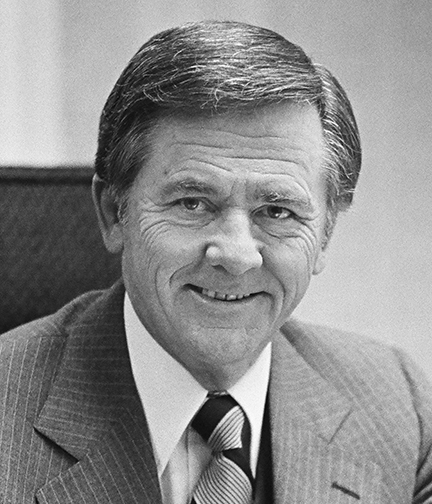 The appointment of Dr. Hollis A. Moore Jr. to the office of President of Bowling Green State University came about after a seven month search begun prior to Dr. Jerome leaving the university. His appointment as president on May 13, 1970 came at a critical time in BGSU’s history because the shootings at Kent State had occurred only nine days earlier. However, Dr. Moore rose to the occasion and brought a sense of stability to BGSU during chaotic times. During his eleven years at BGSU, Dr. Moore was well liked and respected by both faculty and students. His overwhelming sense of fairness helped to earn him this respect.

Under Dr. Moore’s leadership, BGSU made many advances academically which were also reflected in the university's administrative structure. In 1973, Moore oversaw the creation of the College of Health and Community Services, the first new college at BGSU in 38 years. In 1975, the School of Music became the College of Musical Arts and the School of Speech and Communication was formed. The School of Technology and the School of Health, Physical Education, and Recreation were formed in 1978 and 1979, respectively. During Moore's administration, doctoral programs in mathematics and history were also established. In 1978 Dr. Moore received Austria’s Gold Medallion, one of the highest academic honors in Austria, marking the 10th anniversary of exchange between BGSU and the University of Salzburg.

The 1970s brought other changes to the University. Enrollment increased to 15,000 during Moore's term. With changes in the national economy and in state funding for higher education, Moore worked to increase private funding for the university. This funding reached its peak in 1980 at $2 million. Moore also oversaw the construction of three new buildings on campus: the Mileti Alumni Center (completed in 1976), the Student Recreation Center and the Musical Arts Center (both completed in 1979). The total cost of these construction projects was nearly $16 million.

Dr. Moore was born on April 3, 1923 in Pierce City, Missouri. He earned his Bachelor of Arts in history and political science in 1946 at Baylor University. He went on to receive his Ph.D. in education administration from the University of Texas. He also held honorary degrees from Hanyang University in Korea and from Central Michigan University.

Prior to becoming president of BGSU, Dr. Moore held a variety of important positions. He served as the Executive Secretary of the Committee for the Advancement of School Administration in Washington D.C. He was the Director of Education at the W. K. Kellogg Foundation and the Dean of Education at the University of Arizona. He also served as a consultant for the US Office of Education and the Department of State’s Bureau for Cultural Affairs. In addition, he was a member of the White House Conference on Education in 1956.

In the months before Dr. Moore’s death in 1981, he was frequently ill. However, his death was unexpected and was a tragedy for the university.

Moore Musical Arts Center was dedicated on May 8, 1981 in honor of Dr. Moore and his wife, Marian.