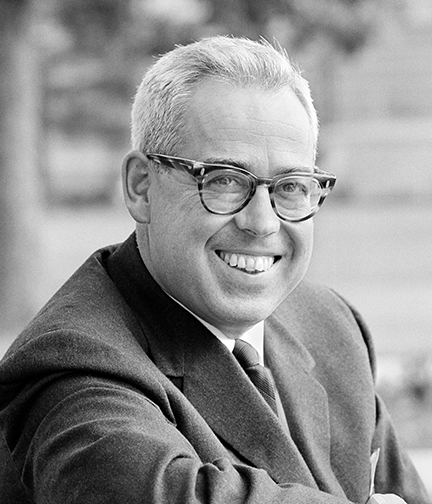 His career as an educational administrator began at Middlebury, Vermont, where he was assistant to the President and instructor in economics (1946-1950). In 1953 he was appointed Associate Professor of Business Administration at Syracuse University, where, in 1958, he became Dean of the College of Business.

In 1963, Dr. Jerome became the sixth president of Bowling Green State University. During his seven years here, he guided the University through a period of rapid physical growth, as evidenced by the addition of ten buildings, including the library, by a major jump in enrollment, and by the establishment of programs such as the Center for the Study of Social Behavior. Library growth during this time included the establishment of the University Archives, the Historical Collections of the Great Lakes, and the Browne Popular Culture Library.

It fell to Dr. Jerome to guide the campus during the turbulent years of the Vietnam era. Thanks to his leadership, BGSU remained open during the days following the May 1970 Kent State shootings, the only Ohio state university to do so.

Dr. Jerome left BGSU in 1970 to accept a position as special consultant to the President of Florida International University. He later became Distinguished University Professor of Management at FIU.

In 1982, the Bowling Green State University Board of Trustees passed a resolution re-naming the University Library in honor of President-Emeritus Dr. William Travers Jerome, III. A rededication and naming ceremony was held at the William T. Jerome Library on September 23, 1983. Dr. Jerome passed away in March 2008.