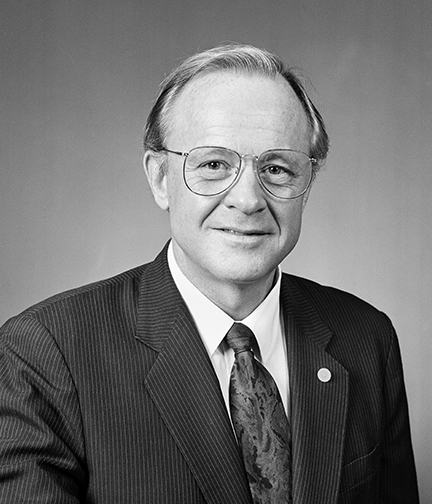 Paul J. Olscamp was appointed as president of Bowling Green State University on March 15, 1982. His appointment was the result of an eleven month search following the death of Dr. Moore. Because of the public perception that the Board of Trustees was not willing to share adequate information about the search, his transition to office did not go smoothly. Despite his rocky beginning as president at BGSU, Dr. Olscamp strove to embody the slogan, “An Environment of Excellence.”

Over the course of Dr. Olscamp's twelve year term, academics at BGSU improved greatly. Graduate student enrollment increased by 23 percent during this time, with five new doctoral programs created. In addition, the number of scholarships for academic excellence increased greatly. Dr. Olscamp was also instrumental in the development of the Center for Photochemical Sciences. The number of holdings at the library increased to over 4 million volumes under his leadership.

Dr. Olscamp played an active role in improving BGSU’s financial situation. The university's endowment increased from $1.9 million to over $47.4 million during his presidency. As a result, he created the first endowed professorships at BGSU. During this time, the faculty was given a role in developing the annual budget and shared authority with the president in interpreting the academic charter. He also held periodic forums with students where they could voice their concerns about campus issues. Because of statewide budget cuts, the Board of Trustees asked Dr. Olscamp to stay on as president beyond his anticipated retirement in 1994.

Paul J. Olscamp was born in Montreal, Quebec, Canada on August 29, 1937. He received his Bachelor of Arts and Master of Arts degrees from the University of Western Ontario in 1958 and 1960, respectively. He went on to receive his doctorate in philosophy from the University of Rochester in 1962, the first such degree awarded there. His continuing love of the subject was evident during his time at BGSU because he taught a philosophy course almost every semester, despite managing all his duties as president.

Before coming to BGSU, Dr. Olscamp served as president of Western Washington University for seven years. While president of BGSU, he held a position on the Board of Directors of the American Association of State Colleges and Universities. He was appointed to the National Council on the Humanities by President Reagan in 1987. In 1989 he was elected as the Mid-American Conference representative to the National Collegiate Athletic Association’s Presidents' Commission. Following his retirement from BGSU in 1995, Dr. Olscamp served as interim president of the University of South Dakota and then went on to hold the same position at Mayville State University in North Dakota.