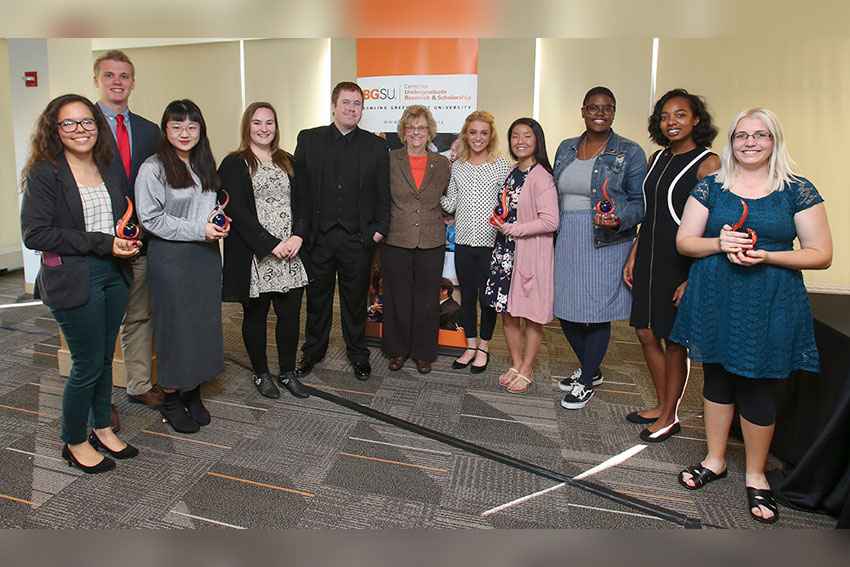 Bowling Green State University students are truly “embracing global engagement,” studying around the world to expand their skills and understanding. At this fall’s “Embracing Global Engagement: Internships, Service- and Experiential Learning Symposium,” nearly 50 students shared their experiences in oral and poster presentations. The winners were recognized at an Oct. 17 ceremony where they received an original piece of glass art presented by President Mary Ellen Mazey.

Attendees at the ceremony heard from Steven Brittan, president of the Studio Arts College International, in Florence, Italy, an education abroad program in which BGSU participates.

“Travelling abroad as part of one of the BGSU programs is often a life-changing experience for the students, and it was wonderful to see both undergraduate and graduate students sharing this year their amazing overseas experiences with the BGSU community at our annual Embracing Global Engagement Conference,” said Dr. Cordula Mora, director of the Center for Undergraduate Research and Scholarship, which hosted the symposium and awards.

The winners’ international education experiences ranged from Hungary to Germany to China to South Africa and from art to aquatic biology.

Undergraduate Wing Sze Liu, a Hoskins Global Scholar, was one of the winners in the oral presentation category for her report “Making Art, Experiencing Art, and Seeing the Differences in the Art World” about her study in Austria and Germany. Her adviser was Leigh-Ann Pahapill, an assistant professor in the School of Art. Liu, a 3-D art major, attended the Salzburg International Summer Academy of Fine Arts the summer of 2016 before her study abroad in Salzburg, Austria, where she worked with the German contemporary artist Nora Schultz in a three-week course. Liu exhibited her final installation and performance at the Hohensalzburg Fortress in Salzburg. In the fall semester, she studied German in the University of Salzburg, and then worked as an intern in the NOME Gallery in Berlin. NOME is a contemporary art gallery that engages diverse disciplines across culture, technology and political issues. Liu also immersed herself in the local art environment; participated in exhibition openings, art festivals, the Berlin gallery weekend and the local graffiti tour. She also attended the three major international art conferences in Germany, Greece and Italy.

Undergraduate pre-service teachers Taylor Nicholson and Chelsea Caswell were recognized for their comparative study “Engineers of the Soul: A Reflection of Chinese and American Education.” Dr. Gabriel Matney, an associate professor of mathematics education in the School of Teaching and Learning advised them. Caswell and Nicholson worked alongside Chinese pre-service teachers and mathematics faculty, and reflected upon what makes a Chinese classroom different from an American classroom, how students in China view mathematics, and how their perception of education differs from ours. They examined the differences in Chinese education that cause their international math achievement scores to be ranked third while the United States ranks 12th, and how those differences relate to the Chinese cultural perspective on education.

China was also the education-abroad site for undergraduate business students Alexis Allen, Kasi Clayton, Summer McVicker, Cheyenne Culbertson and Garrett Frye. They learned about the ins and outs of international business during their stay in Xi’an, accompanied by advisers Dr. Man Zhang, an associate professor of management, and Dr. Min Yang, an assistant professor in the School of World Languages and Cultures. The students researched the adverse effects of pollution on the Chinese people and developed a business proposal and strategy to market an eco-friendly pollution mask that is not only realistically apt to succeed in the Chinese economy but also addresses the concerns that the team outlined in its research, including a customer and cultural analysis marketing plan and pricing strategy.

For Allen, the trip had special meaning because it took her near the birthplace of family members. She will return to China next summer for a business internship.

Second-year graduate students in College Student Personnel Ayanna Byers and Shaunda Brown examined the field of student affairs during summer internships at the University of the Western Cape in Cape Town, South Africa, and a two-week study tour. Their presentation, “Where Are the Americans? Experiences of Being Black and Abroad in South Africa,” highlighted the mystery and surprise they represented for South Africans they encountered, and the challenges of living and working “in the aftermath of apartheid, where there is still a rigid racial caste system,” Byers said, with all the extremely nuanced interactions influenced by the country’s history.

For Byers and Brown, being black in a predominantly black society was a revelation, but their being black and American presented a conundrum for others, especially since they did not fit the media, reality TV portrayal of black American women at all, they said.

Working in the Office of Leadership and Responsibility, the equivalent of a U.S. student affairs office, “We also learned that the concerns were so different because of the context,” Brown said. “When you have 60 percent of students who are food-insecure, the needs are very different.”

Their winning presentation explored current issues surrounding violence against women on campus and institutional response, United States historical and current respectability politics in a South African context, the economic, political and social damage of the system of apartheid, and navigating spaces and finding community.

Dr. Christina Lunceford of the Department of Higher Education and Student Affairs was their adviser.

Winning the top poster presentation award was first-year graduate student in biological sciences Christina Moore for her project “A Comparative Look at the Limnology of Two Great Lakes.” Moore traveled to Hungary with biologists Dr. George Bullerjahn, Professor of Research Excellence, and Dr. Michael McKay, Ryan Professor of Biological Sciences, to study Lake Balaton in western Hungary and Lake Ferto, on the Austrian-Hungarian border. The experience showed her the life of a limnologist (one who studies the biological, chemical and physical features of bodies of freshwater) in action.

“I was part of a research team looking at algae in freshwater systems,” Moore said. “There’s an algae problem there although it’s a different organism from the Planktothrix we see in Sandusky Bay.

“During our visit to Balaton, we joined a limnological survey where we assisted BLI scientists with their measurements of physico-chemical parameters and examined phytoplankton and zooplankton during early spring. Experiencing science on Balaton and interacting with our Hungarian hosts to learn more about the lake, the parallels between our two inland seas — Balaton and western Lake Erie — were reinforced.”

Moore’s interest in aquatic, or freshwater, biology grew since she took a class with McKay in 2014 as an undergraduate and asked if it could be made into an Honors class. After graduating in May, she joined the lab last fall and is flourishing, McKay said.