Biking the U.S. for MS 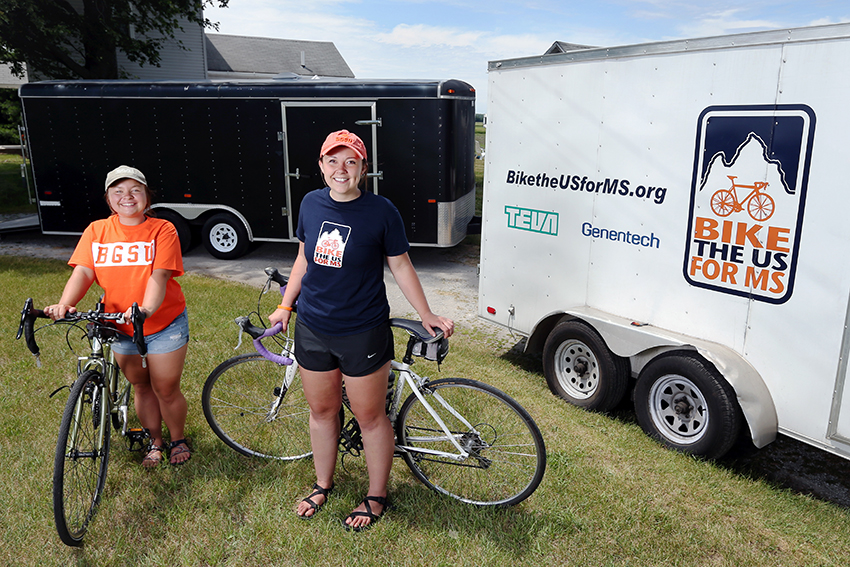 On Aug. 4, Kaylyn Messenger ’16 and Amanda Piorkowski ’16 will complete something many people talk about, but few ever do – a cross-country road trip. What makes their trip especially interesting is that they’re making the 4,295-mile journey on bikes.

The two set out from Bar Harbor, Maine, with two dozen other cyclists, on May 28 as part of Bike the US for MS. The organization organizes these trips to raise awareness and funds for multiple sclerosis research.

This is Messenger’s third trip with the group.

“I was looking for something to mark off the bucket list, cross-referencing with multiple sclerosis, and I found this,” said Messenger, who earned a Bachelor of Science in psychology from Bowling Green State University, adding that the death of her aunt, who had multiple sclerosis, contributed to her decision. “You don’t realize how prevalent it is.”

Messenger loved the ride so much that she recruited Piorkowski, a tourism, leisure and event planning major. The two became friends during their time in Kappa Kappa Gamma.

“We had talked about going on adventures together,” Piorkowski said. “And I had heard such great stories about the ride, I wanted to do it.”

Messenger added, “It’s incredible to be able to raise awareness for a special cause with your best friend.”

Both women worked with the organization in 2016, Messenger as a route lead and Piorkowski as an intern.

“They asked me to come back this summer and I couldn’t pass it up,” Piorkowski said.

Messenger now has a full-time job with the organization as a route coordinator. 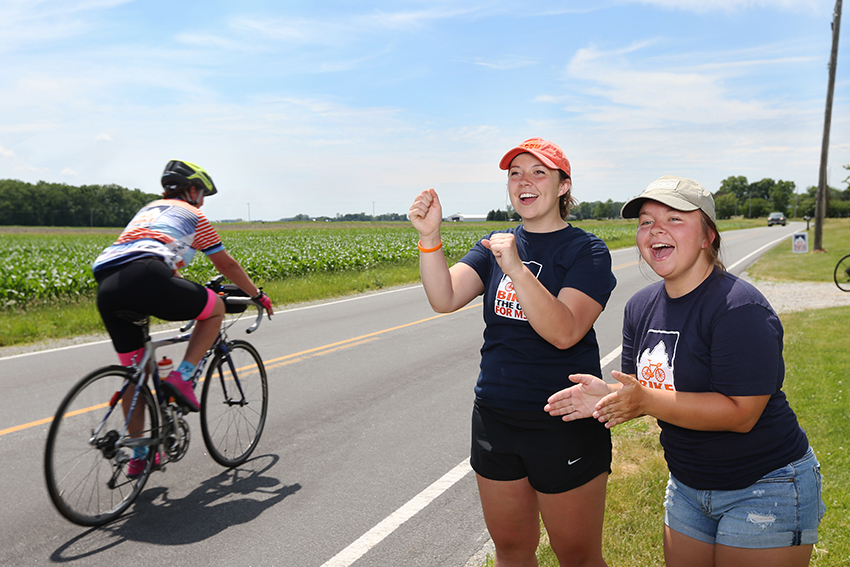 “Anybody can do it,” she said about the ride. “You would be amazed at what your body can do when you put your mind to it.”

While Messenger had participated in Bike for Tikes at BGSU, Piorkowski had only ridden a couple miles prior to her first cross-country ride. They ride about 70 miles a day.

“Bowling Green is flat compared to the Rocky Mountains,” she said, laughing. “It’s a great feeling. It’s amazing to see how kind people can be. I love everything about it, but the people you meet along the way are the best part.”

Messenger added, “You see so many beautiful things when you slow down. It’s really powerful.”

As of last week, the women were in Montana. They’ll end in Seattle, 69 days after they set out. Their group includes nearly two dozen cyclists ranging in age from 21 to 67 from around the country, including Texas, Arkansas, Montana and New York. They chose this route, the Northern Tier, partially because it includes an overnight stay in Bowling Green. Last year, the two completed the 3,785-mile Trans American route, from Yorktown, Virginia, to San Francisco. It is one of the oldest bike routes in the country.

“It is a great way to see the country by bike and van,” Piorkowski said. The leaders do not ride the entire trip because they need to coordinate logistics along the way.

In addition to each cyclist raising $1 per mile of the ride, they also volunteer in efforts to improve the lives of people living with multiple sclerosis on rest days along the way. While in Cleveland, they participated in service projects at the North Coast Community Homes and the Westpark Neurology and Rehabilitation Center.

The route brought the team to Bowling Green after their stop in Cleveland.

Most of the time, the group stays at churches and schools along the route. In Bowling Green, the team camped at the Stimmel’s Market, known locally for their market on West Wooster Street.

“They’ve been amazing,” Messenger said, adding that the family received the Diamond Award this year for their support of the cyclists.

Monroeville, Indiana, was the next stop for the team. It is roughly a quarter of the way into their journey. Two days after arriving in Seattle, both women will begin the Pacific Coast route, which ends in San Diego. Two days later, Messenger will begin the Southern Tier route, ending in St. Augustine, Florida. Piorkowski has not said yes – or no – to that journey.

Eventually Messenger wants to get her master’s degree in social work. “For now, this is a pretty great organization to be working with,” she said.

“BGSU was my first and last college visit,” Messenger said. “I loved it here; I didn’t go on another one.”

Although Piorkowski’s mother attended BGSU, she came here because “it just felt like home.”

Readers can learn more about Messenger and Piorkowski’s journey and see photos online.