Falter Thomas reaches out to colleagues in Peru 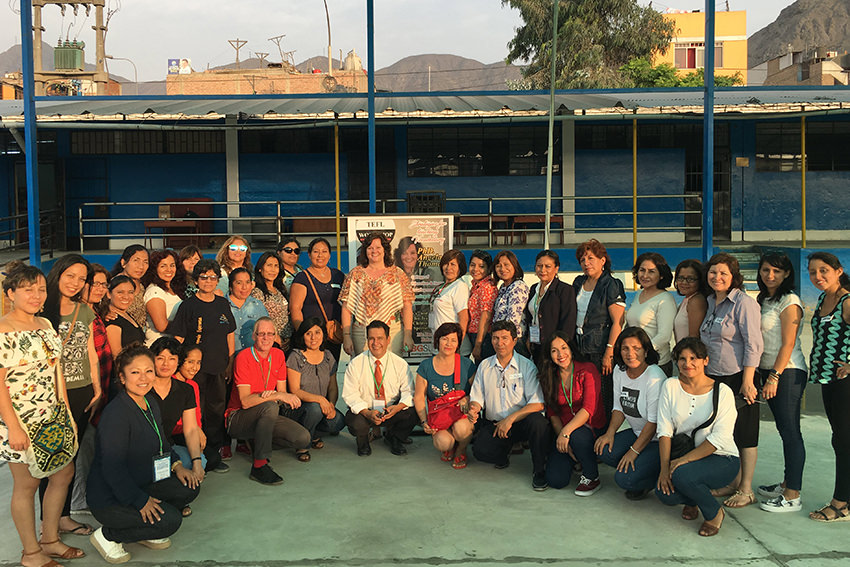 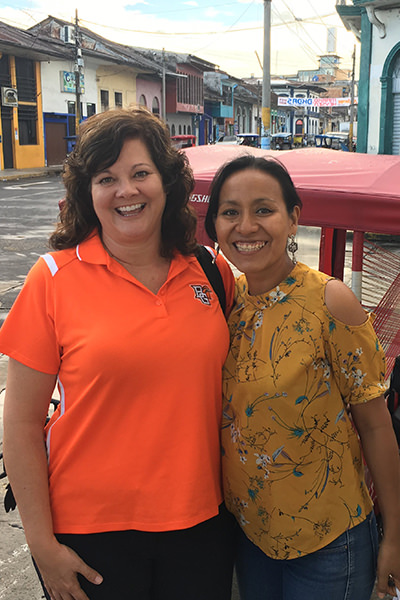 Angela Falter Thomas and Dalia Panduro in Iquitos When Dr. Angela Falter Thomas, an associate professor of education, planned her faculty improvement leave for this year, her purpose was to write a textbook to fill a void in middle childhood education language arts materials. But in addition to spending intensive hours on that now nearly completed project, Falter Thomas has also managed to get far away from her computer to provide another kind of much-needed help to teachers in Peru. She also made a 10-day trip to Costa Rica in November to organize an inaugural 2019 winter session, and is visiting several of her former students in their schools to update her knowledge of what’s happening in U.S. classrooms today.

“I wanted to embrace every opportunity this faculty leave presents,” she said.

In December, Falter Thomas received a request for help from two Peruvian teachers, Blucar Ledesma and Dalia Panduro, who had visited Bowling Green State University in 2015 as part of the IREX program, which brings about 20 international teachers to BGSU each year for six weeks of professional development. Falter Thomas remembers the first, snowy night the IREX group arrived and she met them at a dinner in Mileti Alumni Center, where Ledesma and Panduro talked about being from very different parts of Peru. Falter Thomas connected with them and has stayed in touch ever since.

“It’s really hard not to develop bonds with these absolutely remarkable people, who come from really challenging places,” Falter Thomas said. “Their stories are both heartwarming and heartbreaking.”

So by January she was on her way to the mountains, jungles and Amazon region of Peru to conduct training for dedicated teachers who do not have the resources available to American educators. Far from the developed tourist areas such as Machu Picchu, Falter Thomas and her husband, Shayne, who accompanied her on the trip, saw a much different and less advantaged side of Peru. They feared their trip might be over almost before it started because, after arriving in Lima, they were awakened at 4 a.m. by a significant earthquake, followed by a tsunami warning. That, luckily, did not come to pass, and the quake caused only minor road damage where they were.

They set off for the areas where Falter Thomas would be teaching. Even though it is summer now in Peru and the teachers are on break, they journeyed over great distances to attend the trainings because, as they told her, they want to be better at their work.

“My particular area is language arts and word study,” Falter Thomas said. “In the workshops, we worked on methods for word study and vocabulary, and strategies to share with their students. The teachers are highly educated and speak good English. I just had to slow down and repeat things in different ways, ask questions to make sure they were understanding. I used the same methods you’d use in a middle school classroom.”

The first workshop was attended by 35 teachers and was held at Ledesma’s school in Comas, a high-poverty area in Lima. One teacher traveled eight hours on buses to get there, Falter Thomas said.

“Students there are typically the first generation in their families to ever attend schools,” she said. “They’re there because their families have moved from either very rural areas or the jungle and are living in shanty towns right above the school. Seeing their living conditions firsthand was heartbreaking. The schools have no toilet seats or paper, no hot water, nothing to dry your hands. They’re really bare bones and very dire.”

Next, the Thomases went to Panduro’s school, in Iquitos, where it is estimated between a half-million and a million people live.

“To get to Dalia’s school you have to take a boat or fly, because Iquitos is inaccessible by road,” Falter Thomas said. “So we flew into their little airport, which is about the size of Toledo’s. Dalia drove up outside of my hotel on her little red motorcycle. There are very few passenger cars, but there are motor taxis. Dalia negotiated the price and followed behind on her motorcycle because it’s not safe. In Comas, Blucar would carry my bag or purse because I stand out. You have to be really careful, emotionally and physically always on guard. When you’re so poor, it leads people to do desperate things, sometimes.”

Again, Falter Thomas found citizens living in shacks with just four metal or wood walls, sleeping on sheets on the floor or in hammocks, with only open sewers for sanitation. Along the road are stands selling chickens, guinea pigs and tortoises to eat.

But Panduro teaches in a boarding school, which hosted Falter Thomas’s workshop. “It’s a new concept, a boarding school for high-achieving students, that’s only been open about two years,” Falter Thomas said. “The government has selected the brightest 100 students from the surrounding area of Iquitos, and for now it only has 14- and 15-year-olds. In very rural areas the average family size is seven, so for parents to be able to send their kids here, where they get free housing, uniforms, health care and meals, is really desirable.”

Falter Thomas leaned that one student had to travel 27 hours by boat to reach the school.

Through it all, Falter Thomas continued to marvel at the dedication of the faculty to serving their students and their eagerness to learn new methods.

“The Peruvian teachers were just amazing,” Falter Thomas said. “They were so appreciative and grateful. As we were leaving, one put her hands on my shoulders and thanked me. She said, ‘It’s like nobody cares about us. Nobody wants to help us get better, and you did just that.’”

As she had during a 2016 trip to Cuba, Falter Thomas brought piles of children’s books to distribute to kids.

“I’ve found it’s a great conversation starter,” she said. “They warm up and they try speaking with me either in their language or in mine. In Peru, books are incredibly expensive and when the kids found out they were free, they were so delighted.”

She also carried numerous gifts for the teachers from Dr. Sharon Subreendoth, a professor in the School of Teaching and Learning, who heads the IREX grant that brings the international teachers to campus each year. The IREX Teaching Excellence and Achievement Program brings outstanding secondary science and English as a foreign language teachers from abroad to the United States to further develop expertise in their subject areas, enhance their teaching skills, and increase their knowledge about the U.S. IREX is an international nonprofit organization providing thought leadership and innovative programs to promote positive lasting change globally.

Now back at home, Falter Thomas is putting the finishing touches on her textbook. There has not until now been a high-quality, affordable textbook for teaching middle childhood language arts methods, said Falter Thomas, who was a language arts teacher in grades four through eight for 20 years before obtaining her Ph.D. and joining the University. So she decided to create one.

“I’m also spending time with some of my former students who are now teachers,” she said. “I love teaching and I love my students and we keep in touch. I’ve been out of the classroom now for eight years, and it’s been awesome to get into city schools, charter schools, rural schools, urban schools, Christian schools. It puts me in new situations I have not been able to partake in before.”

Besides trips to many schools throughout Ohio, her visits are taking her to North and South Carolina, Georgia, Florida and Houston, where the schools were hit by the recent hurricanes and floods.

The knowledge she gains will help her on her next adventure, a Fulbright appointment next fall at Palacky University in Olomouc, Czech Republic. In addition to teaching education classes, she also hopes to establish a “long-term collaboration and partnership between BGSU and Palacky.”

From all her communications with faculty and administrators at the university, “I know more than ever I’m going to do great work there,” she said. Stay tuned.