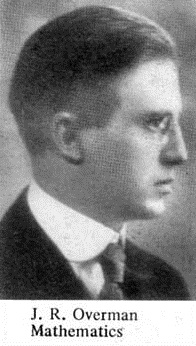 This section is based on the account of the first mathematics faculty member at BGSU (and in fact the first faculty member,and the only mathematics faculty for many years), J. Robert Overman in his book, The History of Bowling Green State University, published by the Bowling Green University Press in 1967. This book was written for the fiftieth anniversary of BGSU. Dr. Overman was there in many very highly placed capacities for that entire time: professor of mathematics, chairman of the mathematics department, dean of the College of Liberal Arts, dean of men, dean of faculties and the university's first librarian. He is pictured at the left. Sometimes we will use his own words.

Overman has a nice opening chapter on the history of teacher training in Ohio up to 1910. That was the year that enabling legislation was passed for two new normal schools in northern Ohio. The other was in Kent, Ohio, which later became Kent State University. The term normal school derives from the French term École Normale.  In the 19th century an educational institution that was dedicated to the training of teachers was called a normal school.  The term was even commonly used in the first half of the 20th century.

Calvin Stowe, husband of Harriet Beecher Stowe, wrote that "The French adjective normal is derived from the latin noun norma, which signifies a carpenter's square, a rule, a pattern, a model; and the very general use of this term to designate institutions for the preparation of teachers leads us at once to the idea of a model school for practice, as an essential part of a Teacher's Seminary."  [David Kullman - Miami U.]

Public financing of teacher education had only started in 1902 when normal schools were funded at Miami and Ohio Universities. (Prior to that "neither Miami nor Ohio University received any regular financial support from the state.") Until then it was left to the private schools, which fought the funding of public institutions. The first of these was at Marietta in 1832.

Classes did not begin, and faculty hired, until Bowling Green State Normal College opened in 1914. The name college was chosen on purpose. They had no intention of remaining a two-year normal school. The name Bowling Green State Teachers College was preferred by the first President, Homer Williams. He recruited some of the faculty from his time at Columbia University in 1913. They were all young and had master's degrees or equivalent training, despite pressure for political rewards.

In 1929 the legislature gave BG and Kent the authority to grant bachelor degrees (which BG had already been doing) and their names officially changed to Bowling Green State College and Kent State College. Colleges of Liberal Arts and Education were established at BG. Overman became Dean of the new College of Liberal Arts. The list of majors included mathematics.

"Frank C. Ogg joined the staff of the Mathematics Department in 1931 and later succeeded the author as its chairman. [1948]" "... in 1935 Bowling Green became a university with a Schmidthorst College of Business and a master's program." In 1935-36 graduate work was offered in several departments, including mathematics.