This document contains information about search options implemented in WebFR3D. This separate tutorial describes how to set up WebFR3D searches. If you can’t find an answer to your question, please contact us.

This diagram summarizes most of the available search options that can be entered in the Query Specification Matrix on the search webpages. Detailed descriptions can be found in the text below. 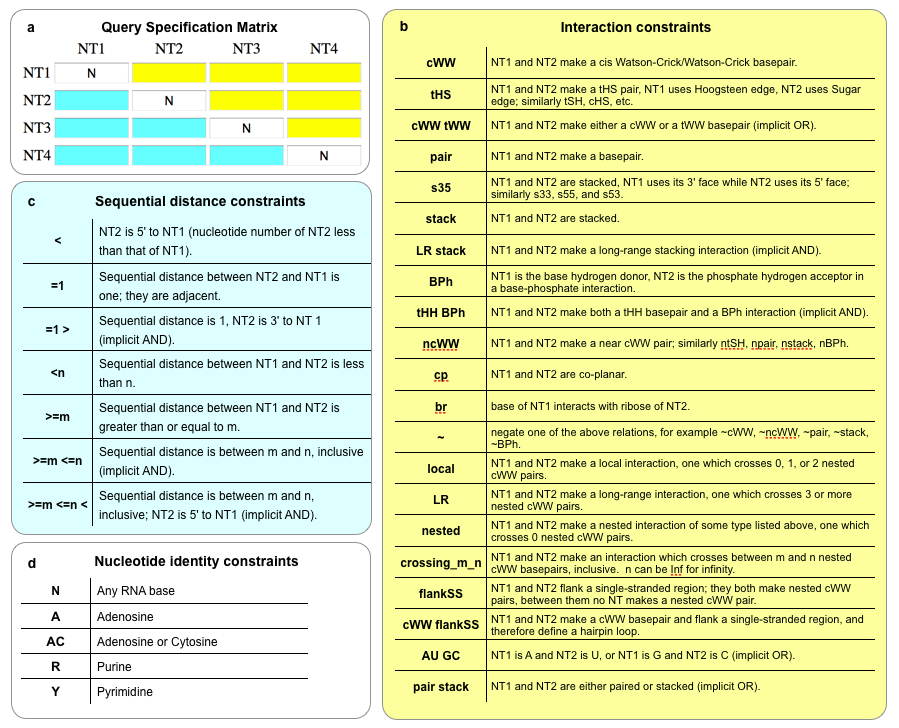 Valid basepair specifications are: cWW, tWW, cWH, cHW, tWH, tHW, cWS, cSW, tWS, tSW, cHH, tHH, cHS, cSH, tHS, tSH, cSS, tSS. Note, however, that the cSS and tSS interactions are not, in fact, symmetric, because each base can use the sugar edge differently. Following Leontis, Stombaugh, Westhof (NAR 2002), type cSs to specify that the first base has priority, csS for the second, or cSS for either.  (Note: this feature is not currently enabled as of October 2021.)

Specifying multiple interactions allows more ways a candidate can satisfy the constraints; for example, typing cWH cHW requires a cis Watson-Crick/Hoogsteen basepair, but either base can use the Watson-Crick edge, and the other uses the Hoogsteen edge.

The abbreviation trans gives all trans categories, cis for cis.

Type ~cWW to exclude candidates having a cWW basepair.

Some pairs of bases are close to, say, cWW, but do not meet the strict criteria for membership in the cWW classification. Type ncWW (“near cWW”) to get basepairs that are  not classified into any category, but for which the cWW category is the closest match, up to a certain fairly generous limit. Type cWW ncWW to get cWW and near cWW pairs, cWW. Type ntrans to get all pairs nearest to a trans pair.

Type s35 for base stacking in which the first base uses its 3 face, and the second base uses its 5 face. Similarly, type s53, s33, ors55. Type stack to allow all stacking interactions. The prefixes “n” and “~” work with stacking, as above.

To specify that the nucleotides must match a certain pattern, type, for example, cWW CG GC to get only CG or GC cWW pairs.

One can restrict to pairs that play a certain role in the secondary and tertiary structure.  For pairs that are nested, type “N” or “nested".  For pairs that cross nested interactions but involve nucleotides in the same branch of the RNA, type local or “L”.  For long-range or distant interactions, between different branches of the RNA, type long-range, distant, “D”, or “LR”.  Note that “nested”, “local”, and “distant” are mutually exclusive.  They can be negated with ~, but ~local only returns distant interactions, not nested ones.

Currently not enabled:  To find bases which are in the same plane and are close enough that they may hydrogen bond in some way, type coplanar or cp.  Near and not coplanar can be obtained with the "n" and "~" prefixes, respectively.

To specify bases that participate in cWW pairs and that delimit a single-stranded region such as a hairpin loop or one strand in an internal or junction loop, type "bSS" or "borderSS" or "flankss" or "flank". Note: for internal and junction loops, flanking nucleotides will be on the same strand, one on each side of the loop. Such flanking nucleotides usually do not interact with one another.  In a hairpin, however, the nucleotides in the closing basepair simultaneously make a cWW pair and satisfy the borderSS relation.

The user can impose a nucleotide identify constraint (nucleotide mask) for their search by putting in nucleotide constraints in the text-boxes on the diagonal in the Interaction Matrix, which has a white background. Typing A, for instance, means that only candidate motifs with an A in the corresponding position will be kept. Typing AG allows either A or G, etc.

The program uses these standard abbreviations for other combinations:

Note that N is the default. One may also exclude a given base using the syntax ~G

for instance, to exclude candidates with a G in the corresponding position.

Nucleotides must be separated by commas in the input page.  Use unit ids as described on the unit id page.

Geometric discrepancy is an entirely geometric measure that takes into account the general shape of the candidate motif and the orientations of its bases. First, we determine the shift vector and rotation matrix which map the geometric centers of the bases of each candidate motif onto the corresponding base centers in the query motif with the smallest error, called the fitting error. After the rigid body operations are performed, we compute the angles of rotation needed to align each base of the candidate with the corresponding base of the query motif. The square root of the sum of the squares (RMS sum) of these angles (in radians) is called the orientation error. The geometric discrepancy is defined to be the RMS sum of the fitting and orientation errors, divided by the number of bases in the query motif.

Here is a description of the output columns from left to right.  Column order is subject to change as we refine the output.  Columns with no data are suppressed.

Instances matching the query are ordered by similarity, so that the more geometrically similar instances are placed near each other in the ordering.  The methodology used is the "tree-penalized Path Length" or "tpPL" methodology of Aliyev and Zirbel (2022).

The heat map displays the all-against-all geometric discrepancy between instances, with the instances listed in similarity order.

You can optionally specify your email to receive a notification once your search has completed.