A full description of how to effectively use R3D Align and the full features it offers are explained below.

The only required input is the specification of the two RNA 3D structures to align.  The user may upload a structure or enter a valid PDB id.  As the user types in the PDB id, an auto-complete function assists the user in entering the proper id by providing a list of PDB ids that begin with the already-typed characters:

The list of files to choose from is updated weekly to be in sync with the files available from the PDB database.

Once the structure is selected from the list, the chains contained in the file are dynamically loaded, with their lengths and brief descriptions, for the user to choose from:

Once the two structures and nucleotides have been selected, the user may choose to use the default alignment parameters and hit the submit button in the lower right corner:

Clicking the examples button provides a list of examples which, if selected, will automatically load into the input page for submission.  Hitting submit will immediately take the user to the results page for the selected alignment.  One can also learn about good alignment strategies by examining the parameters used in the Gallery of Featured Alignments.

The next section describes how to adjust the alignment parameters for the purpose of tweaking the results produced by the R3D Align algorithm.

Larger values of p provide more coverage for each nucleotide, which typically improves the accuracy of the alignment. However, increasing the value of p also has the effect of increasing the running time of the program, often significantly. When aligning small regions or small structures, this increase is not significant. When aligning medium to large regions, it is suggested to use an iterative approach in which a smaller value of p (1-2) is used in the first iteration, a moderate value of p (4-6) is used in the second iteration, and a large value of p (8-10) is used in the third iteration.  The progressively increasing values of p are offset by the progressively decreasing values of the bandwidth parameter β (described below) to maintain a reasonable run time.

The bandwidth parameter (β) is an option that can be used to improve runtime.  β is a positive integer that indicates how far away from the internally-generated seed alignment R3D Align should look for its local geometric alignment.  It is set according to how accurate the seed alignment is believed to be.  If a seed alignment aligns nucleotide i of Molecule 1 with nucleotide j of Molecule 2, then only alignments in which nucleotide i is aligned with a nucleotide in the range j-β/2 to j+β/2 will be considered (β/2 is rounded to the nearest integer).  This reduces the search space, which decreases runtime.

To consider all possible alignments, set β greater than or equal to twice the number of nucleotides to be aligned for the second structure. This has the effect of ignoring the seed alignment.

Notably, in the instance that a user submits a query that has previously been processed, the user is taken immediately to the results page without waiting for processing as the results are retrieved from a database.  Each such submission generates a new randomly-generated URL.

In other cases, upon submission the user is redirected to an interstitial page that can bookmarked for future reference, similar to the one below:

The R3D Align results page provides the user with a wealth of information regarding the computed alignment in a variety of formats. The results are stored on the server indefinitely with stable URLs, which makes it easy for collaborators to share results.  URLs include a long randomly-generated text string, revealed only to the user, to protect the privacy and security of user data and analyses.   The following figure illustrates the form of a R3D Align results page: 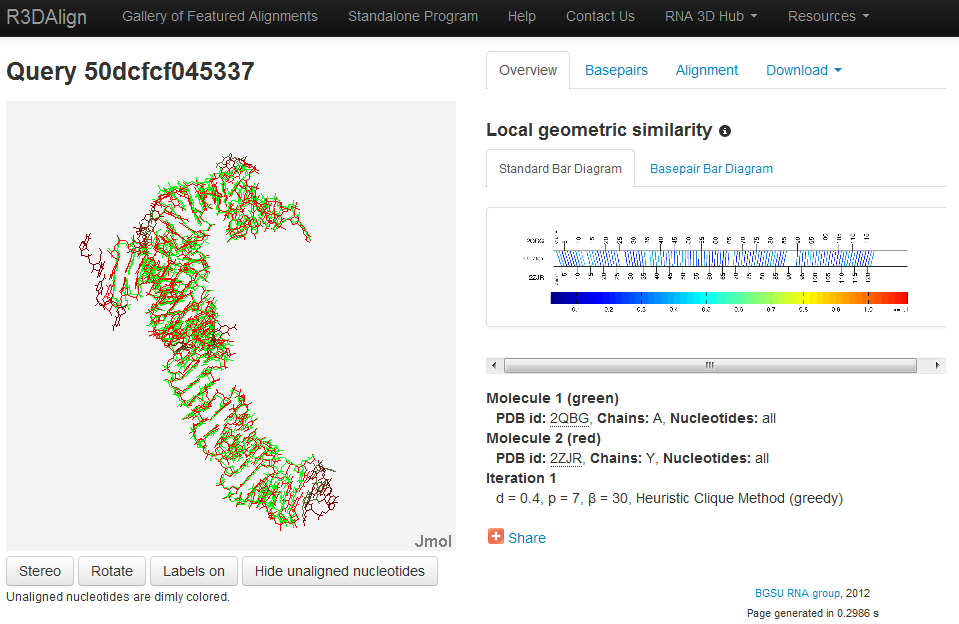 On the left side of the screen is an interactive Jmol applet displaying a rigid superposition of the two structures.  Note that a rigid superposition necessarily only approximates the local nature of the nucleotide to nucleotide alignment provided by R3D Align.  Nucleotides in the first structure are colored green and those from the second structure are colored red.  Nucleotides found to have a corresponding aligned nucleotide by R3D Align are brightly colored.

The right side of the screen features summary output of the alignment in a variety of formats including numerical, textual, and visual.  The user can toggle between the different displays using the tabs at the top.  All output is directly accessible on the results page for viewing and interaction, although files can be downloaded for local use by clicking Download.

We created a brief tutorial to demonstrate how to understand R3D Align results using Jmol.

Clicking the Basepairs tab displays the alignment in tabular form, illustrating the alignment of basepairs in the two structures.  Like the bar diagram this display offers a quick, yet highly detailed visual assessment of the alignment.  The following is an example of the display when this option is selected: 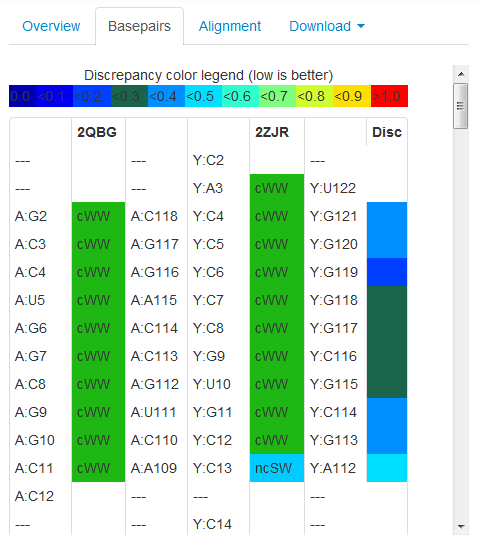 For more information on this output display and how use it properly, see the R3D Align Basepair Table Help.

The Alignment tab provides the user with a summary of the alignment in text format, alternately listing the nucleotides from Structure 1 and Structure 2 in FASTA format:

All output files are downloadable for local use.  Upon clicking the Download tab, the user is presented with the following options: 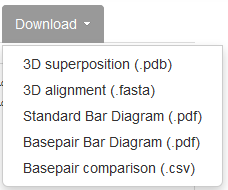