The alignment basepair table provides a wealth of information regarding the correspondences in the nucleotide to nucleotide alignment, the basepairing interactions of each structure, and the structural similarities of local regions of aligned nucleotides.

The following figure shows a portion of the spreadsheet produced by R3D Align to represent the 3D alignment of the T. thermophilus(PDB 1J5E) (Columns 1-3) and E. coli (PDB 2AVY) (Columns 4-6) 16S rRNA structures. 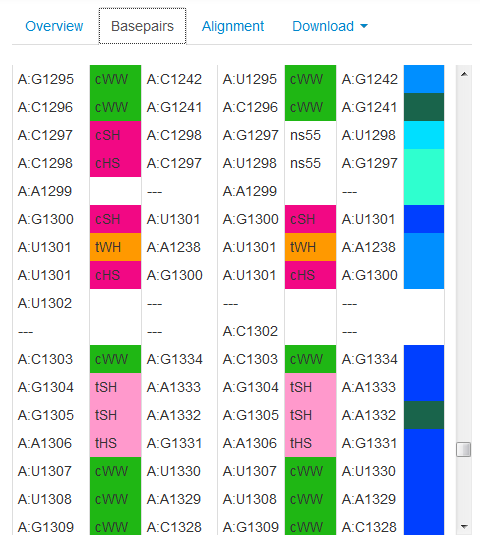 For example, the row indicates that nucleotides G1295 and C1242 form a cisWatson-Crick/Watson-Crick basepair.  A separate row is provided for each basepair a nucleotide makes.

The cells in columns 2 and 5 are colored according to basepair type.  This allows for a quick visual assessment of the alignment of basepairs between structures.  One can quickly conclude that the alignment portion displayed above is accurate because identical colors (and thus identical basepairs) appear in most of the rows.

Rows in which corresponding basepairs do not appear in columns 2 and 5 indicate a possible area of further exploration.  For good alignments, pairs of aligned nucleotides generally make the same base pair types as nucleotides that are also aligned.  Note, in this case, that these rows show the basepair between C1297 and C1298, and then again between C1298 and C1297.  This is because each nucleotide in Structure 1 will be listed at least once in Column 1.

Not only does the spreadsheet thus show every base pair interaction detected in each structure in addition to all of the alignment information, the colors appearing in the rightmost column also provide information regarding the structural similarities of the local region of each aligned nucleotide.  These colors are determined in the same way that the colors for the connecting lines in the bar diagram are determined.  Specifically, for each nucleotide in the first structure that has a corresponding nucleotide in the second, the four nearest neighboring nucleotides with a correspondence are found and the geometric discrepancy between those five nucleotides and the corresponding five is computed to use as the basis for the coloring the line.

The legend is displayed at the top of each basepair table to assist the user for the alignment analysis.

By simply scrolling and scanning the colors appearing in the rightmost column, the user can quickly and easily determine which regions superimpose well locally and which do not.  This information is also represented in a more compact way in the Bar Diagrams.