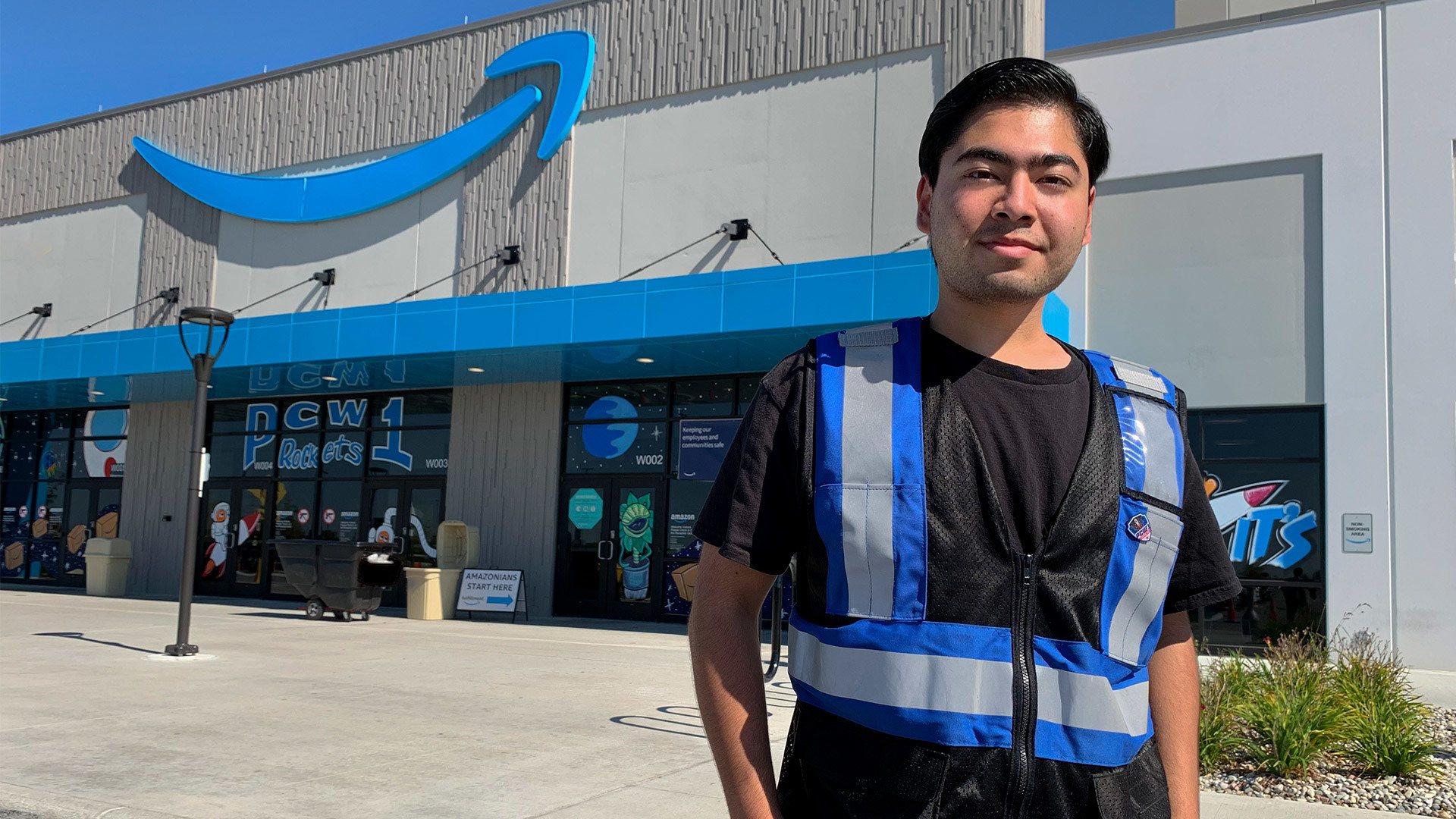 Giovonni Colantonio, a finance major at BGSU, was offered a job at Amazon after he interned this past summer at the Amazon Fulfillment Center in Rossford, Ohio. Photo credit: Matt Fuqaha; Amazon

Giovonni Colantonio makes the most out of his opportunity, hopes others can follow

Giovonni Colantonio knew before he even enrolled at Bowling Green State University that internships were key for his career aspirations.

In fact, in addition to receiving a Thompson Working Families scholarship, because he was required to have an internship as a finance major in the BGSU Allen W. and Carol M. Schmidthorst College of Business, Colantonio said his decision to attend the University was an easy one.

“I was interested in BGSU for two reasons,” he said. “One, I got a scholarship. And the second one was, when I came to visit the campus I asked one of the business professors if internships are encouraged or supported here. He said for some of the majors they are absolutely required. He told me, ‘We definitely make sure that you get an internship before you graduate.’ That sounded pretty good to me. I said, heck yeah, sign me up.”

And because he “signed up” for a BGSU business education, Colantonio was prepared to thrive in his internship with the Amazon Fulfillment Center in Rossford, Ohio, over the summer, from June 7 to Aug. 27. As a result of his internship, Colantonio, who is on pace to graduate in May, was offered a full-time position at Amazon upon his degree completion starting in July.

He was born in Cleveland but moved around several times during his childhood. After moving back to Ohio to finish his senior year at Olentangy High School, north of Columbus, Colantonio said it’s a huge relief knowing he doesn’t have to worry about looking for a job during his final year at the University. He’s in the middle of a busy Fall as he’s taking 18 credits and leading two on-campus organizations: the American Marketing Association and Dean’s Advisory Council on Diversity and Inclusion (DACODI).

“I was worried that I'd have all those major classes, run two student organizations and look for a job,” he said. “Now, that really removes a huge concern that I had going forward. And on top of that, it allows me the opportunity to start connecting Amazon to BGSU. That way, students can be competitive applicants and be prepared to work there.”

Taking advantage of an opportunity

During the first week of the internship at the Amazon Fulfillment Center, Colantonio packed boxes and worked on the countless different inventory lines within their site.

“The point of that first week is to get to know the company and the floor experience so that we understand what our associates do,” he said. “We're not just coming up with ideas and management styles in the abstract. During the second week, I began working on an internship project.”

Colantonio said interns are assigned a project and they have 12 total weeks to prepare and present it to high-ranking managers in the company. But here's where his story takes an interesting turn.

Colantonio’s original and replacement managers both left within his first three weeks at Amazon, leaving him as the only finance person on site for the final nine weeks of his internship. His responsibilities were expanded from just working on his project to being in the daily production meetings. He also was tasked with conducting at least three floor walks to identify opportunities to improve the experience of non-corporate employees, making recommendations for labor allocation and updating the daily administrative report for the site.

“It worked out really well because my closest manager was about 100 miles to the north,” he said. “I basically had to learn how to do it independently and network like crazy, but it was a really good experience because it showed Amazon my potential. What Amazon seemed to see in me well before I did was the ability to take initiative, learn to dive deep and earn trust with my coworkers.”

Business classes put him in a position to excel

Colantonio said he felt prepared going into his internship with Amazon because BGSU faculty are very passionate about what they teach.

“Two particular professors, Donna Greenwald and Dr. Michael Slates, were really helpful because they were able to explain the value of communication and learning what managers look for in deciding who gets their job when they retire.

“I would say Bowling Green, by far and away, has exceeded my expectations — especially as I've progressed from my freshman to senior year, because the classes really emphasize the important skills like Excel and learning how to evaluate companies. And it has exceeded my expectations too in belonging, because I remember when I chose BGSU over Ohio State, some of my family members — not my parents — said it was a mistake. But I think that BGSU has been, by far, a more welcoming place than most people know.”

Helping others succeed in business

Now, Colantonio hopes that because of his success at Amazon, other students from BGSU will be able to follow his example.

“It feels really empowering and healthy to be able to give back and lay down the ladder for others in a way that I’ve always been passionate about,” he said. “I grew up in a single-mother household and the key thing she would always stress, even though she had to work day in and day out for 60 hours a week to make ends meet: Make sure to study and make sure to learn, and that’s the approach I have taken. Coming to BGSU and being the beneficiary of a Thompson Scholarship, I felt an obligation to make sure that since I was very fortunate to have a good mother and go to college, that others would be able to follow in my footsteps.”

That led Colantonio to be involved in DACODI, where he created a survey to see what disadvantaged students would need to help them succeed. In the American Marketing Association, he created another survey and analyzed it to find out how to better help disadvantaged business majors.

“That way we could pass down the ladder so it’s not just the kids who are already coming in with 4.0 GPAs but even the students who are on the fence about being a business major,” he said. “We can give them the opportunity with effort and time to turn their potential into an occupation and a full-on, meaningful career.”