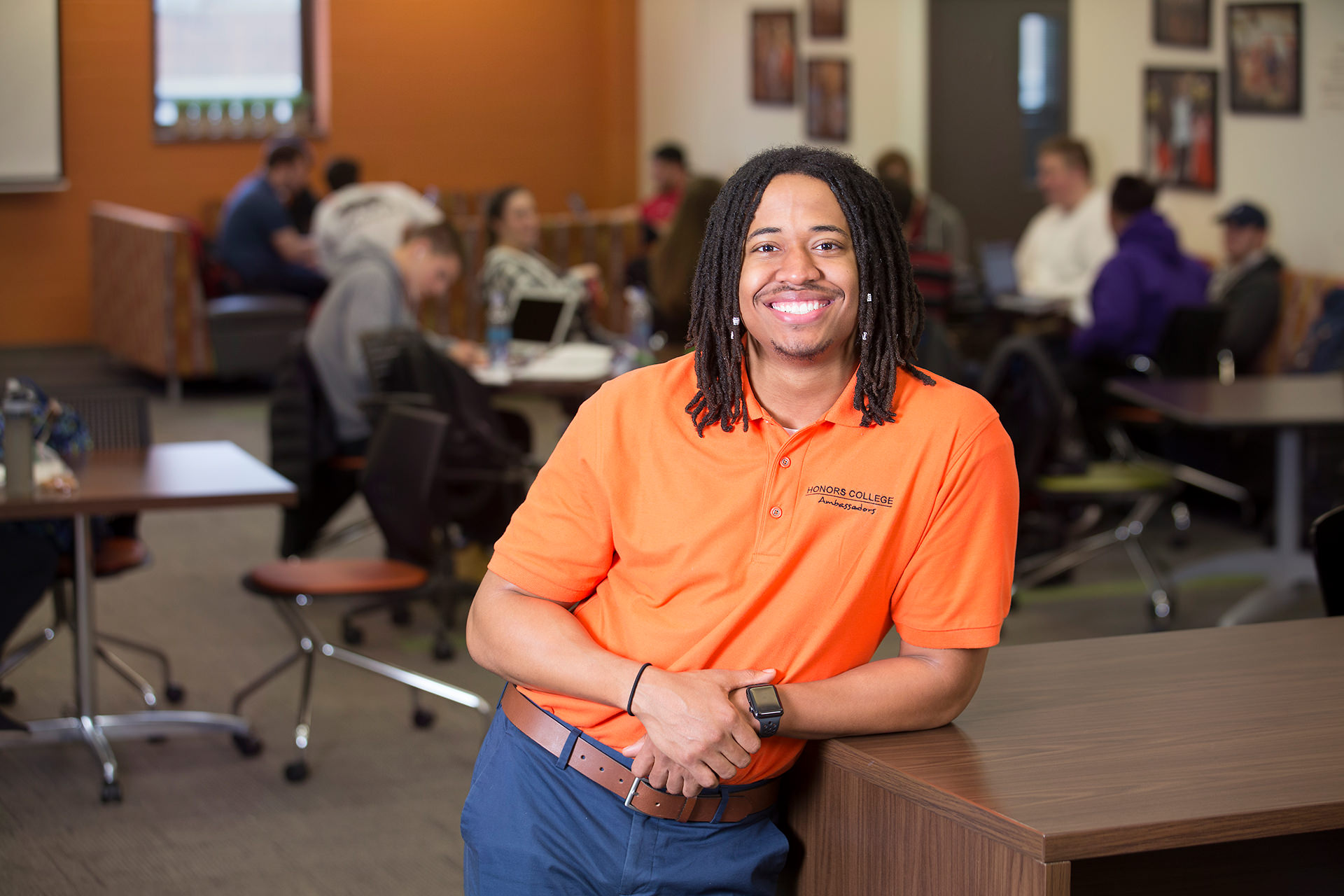 Derwin Pritchett has a love for sports, and originally became aware of Bowling Green State University through its acclaimed sport management program. The Maryland native visited BGSU and the University of Michigan before finally deciding to become a Falcon.

“In contrast to Michigan, BGSU is smaller, but I immediately noticed that it’s a lot more catered toward the students,” Pritchett said. “You’re not just a number here, and I think the community aspect really helped persuade me to come to BGSU.”

As a freshman, Pritchett soon became enamored with the many facets of marketing and decided to change his major. Ultimately, the combination of an Honors College degree and BGSU’s multifaceted business administration program delivered the perfect blend of concise, critical thinking and an array of other practical tools to thrive in his career and in life.

In addition to that first marketing class that sparked his imagination, two Honors College courses, Introduction to Critical Thinking and Critical Thinking about Great Ideas, helped set the tone and direction of Pritchett’s undergraduate formation.

“Critical thinking translates so well to everything you could possibly do,” Pritchett said. “I was able to apply these principles across my other coursework, three internships and in a number of extracurricular pursuits like the BGSU Sales Competition. I believe that one of the factors that employers are really looking for - especially in new college graduates - is critical thinking. They want employees who can come up with solutions based on details that they’re given, with the ability to think about things through a skeptical lens.”

Overall, the Honors College and Honors Learning Community proved to be a productive and enjoyable environment, with ample opportunities to evolve and flourish as a high achieving student.

“The Honors College really sets you up to be successful as a lifelong learner,” Pritchett said. “In addition, the Honors Learning Community is all about surrounding yourself with other people who want to take the extra step outside of the classroom to facilitate their education. And that helps push you to a whole new level.”

Pritchett was also involved in Honors Scholars, which seeks to provide a challenging intellectual experience for a small group of highly motivated students.

“That’s an incredible organization headed by Dr. Neil Browne. It gave me the opportunity to come together with like-minded people and talk about societal issues or different phenomena that are problematic for our country and our world,” Pritchett said. “We would brainstorm on how to mitigate issues like poverty or inequality, and that really helped me to think outside the box.”

Beginning with that first marketing class taught by Dr. David Reid, Pritchett found himself drawn by the many challenges of the business world. One area that he found particularly compelling was consumer behavior.

“Dr. (Phil) Titus did a great job teaching my consumer behavior class,” Pritchett said. “It helped me to understand the consumer’s perspective: What are you looking for, how do you process information and how can I use these insights to develop a successful sales strategy or sales tactic?”

This customer focused, market-driven approach and the critical thinking classes provided a foundation for Pritchett’s entry into the annual BGSU Sales Competition. While he lost in the first round in 2015, he characterized what most people would describe as a setback as a “catalyst for growth” that just fueled his determination to win the next year. And that he did.

With the expert coaching of Dr. Gregory Rich, Pritchett was able to better prepare for the sales competition and in November of 2016, he came in first out of more than 50 BGSU competitors. Pritchett went on to compete in the National Collegiate Sales Competition in Atlanta the following April, where he placed 10th out of a field of more than 140.

“What set Derwin apart in these events was his competitiveness, his ability to crunch and interpret numbers on the fly, and above all, his knack for asking the right questions in order to identify and understand customer concerns and problems,” Rich said.

His success in the competition helped Pritchett to land the third internship of his BGSU career with 3M, who sponsors the University of Toledo Invitational competition where he placed third in the Junior division. Prior to this opportunity, he had interned with Bionix Development Corporation in Toledo and Marathon Petroleum in Findlay. Additional experience with corporate sales and marketing came with his marketing capstone class last semester, in which Pritchett developed a comprehensive marketing plan for Vitakraft Sunseed in Weston, Ohio.

According to Pritchett, one of the major things that sets his new employer, Brown & Brown, apart is the way it fosters the competitive nature of its sales staff. Many companies keep individual sales performance confidential as a matter between the supervisor and salesperson. This national insurance broker takes a much different approach. They rank all of their producers and post the numbers for all to see.

“I think I’m different than many other people in the sense that I find being called out regarding my performance to be inspiring,” Pritchett said. “Either I’m going to be at the top and proud that they’re sharing this information, or I’m not going to be where I want to be yet and will be motivated to do better.”

For Pritchett, the education he received at BGSU has provided the ideal background for this new professional challenge. He became an integral part of a high-performing community that allows for the competitive spirit while valuing mutual respect, authentic relationship and lasting friendship. He has also learned to take constructive criticism and leverage it for personal growth.

“BGSU, the Honors College and my marketing degree have prepared me for having co-workers who I’m going to compete against while maintaining a positive team dynamic,” Pritchett said. “The education I received from BGSU - not just formally, but also informally - from my instructors, other students and outside of the classroom, has definitely prepared me for what this employer is looking for.”