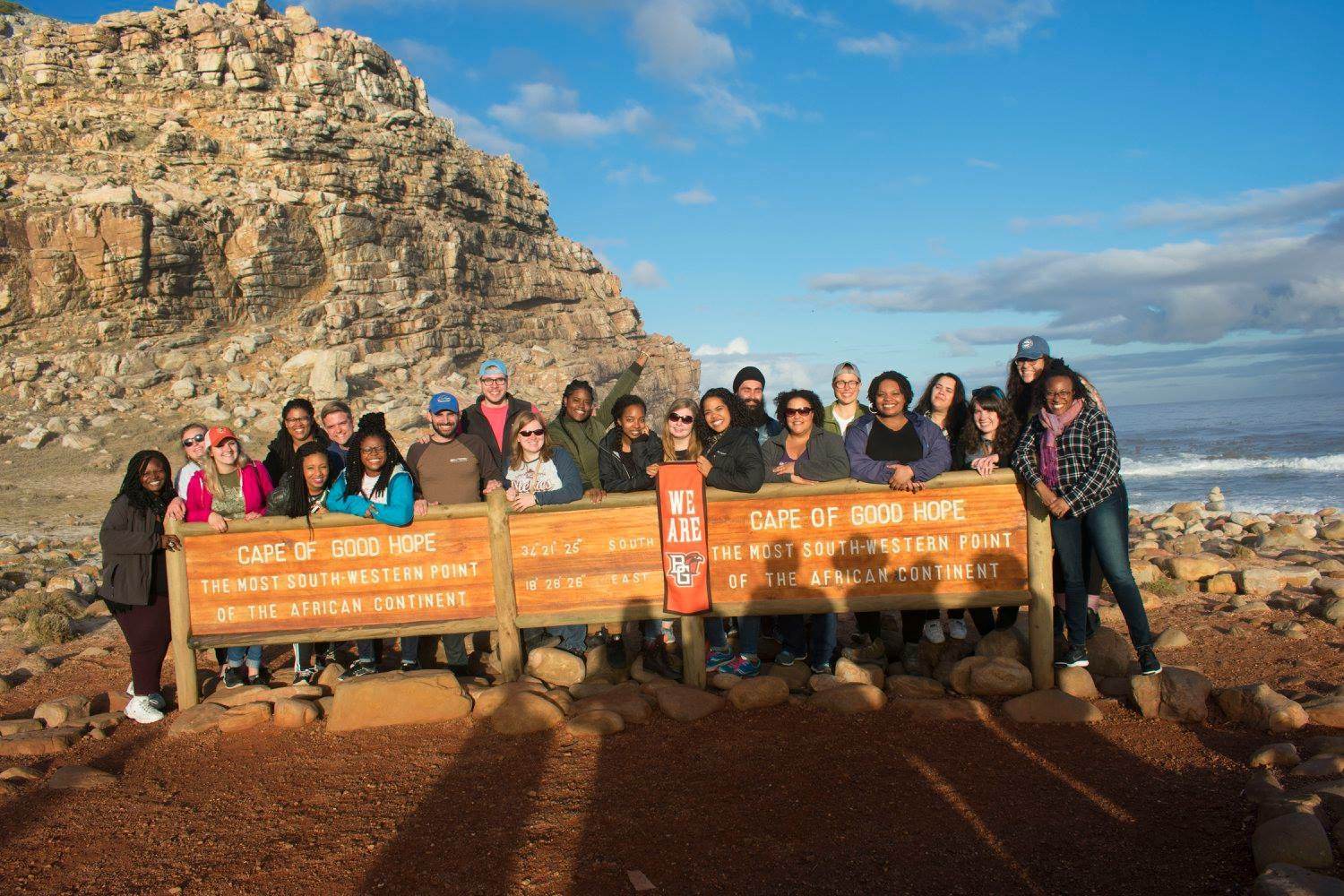 Ayanna Byers and Shaunda Brown (to the left of the "We Are BG" sign) with BGSU faculty member Dr. Christina Lunceford (seventh from right), leader of the South Africa Study Tour class, at the Cape of Good Hope, along with students from other universities

The view from South Africa

Ayanna Byers and Shaunda Brown (to the left of the "We Are BG" sign) with BGSU faculty member Dr. Christina Lunceford (seventh from right), leader of the South Africa Study Tour class, at the Cape of Good Hope, along with students from other universities

When she was in the fourth grade, Ayanna Byers spotted a book called "Why Are All the Black Kids Sitting Together at the Cafeteria Table?" Being a very curious child, she wondered, "Oh, that's very interesting — why are they?" As one of only a few black kids in her New Castle, Pennsylvania, elementary school, that question planted the seed of her interest in what she would later come to know as social psychology and in the implicit roles of race and ethnicity in education.

Following undergraduate studies in psychology and business administration at Slippery Rock University in Pennsylvania, Byers is a second-year student in Bowling Green State University's master's program in College Student Personnel. Last summer, she got to examine those questions about human behavior, race and ethnicity even more deeply during an internship in South Africa, where the topic of race is infinitely more complicated and nuanced than in the United States.

With her classmate Shaunda Brown, Byers was an intern in the Office of Leadership and Social Responsibility, the equivalent of a U.S. student affairs office, at the University of the Western Cape in Cape Town. They began their experience with a two-week study tour of the region in which they visited several universities.

As she began her final semester before graduating and entering the field of higher education, Byers said the experience has had a profound effect on her and caused her to become more reflective, more deliberate in her judgment and more probing in evaluating situations and advising undergraduates. It has also given her a perspective on the relative hardships of life and on her own identity.

"The cool thing about BGSU's program is it affords you the opportunity to study abroad," she said. "We had the option of going to the U.K. or South Africa. Specifically because of my identity, I was very interested to go to the continent of Africa. I knew if I went to the U.K., because of our shared history, culturally it wouldn't affect me because I wouldn't have to confront my identity.

"I've heard it said that if you want to grow, you must accept the discomfort. I wanted growth and I sure got it," she said.

But in South Africa, where historically ethnicity and race largely determined a person's ability to live in certain places and have or not have opportunities, Byers and Brown did not fit neatly into any category.

"That was a question we got a lot. People would guess my lineage. They couldn't understand how I didn't know my lineage," Byers said.

Further, their speaking English with an American accent was confounding to those they met.

"Looking the way I do, I should have had a Dutch last name and been speaking Xhosa," she said. She and Brown also did not speak Afrikaans, the language of white descendants of Dutch colonialists and of the colored descendants of former slaves.

Nor did they sound or behave like the American black people South Africans were familiar with from television shows and music videos. They were neither rich nor loud, neither "ghetto" nor flashy, she said. It reminded her of conversations with classmates in her predominantly white college where they would say, "You're not at all like that," referring to their own media impressions.

Byers also experienced this disconnect another way as an undergraduate. A first-generation college student, all she knew of higher education for people of color was what she had seen on TV shows such as the "Cosby Show" spinoff "A Different World," insight which has now helped her in her role as a mentor to students like herself at BGSU.

In Cape Town, feeling this uncertainty about where they fit in, she and Brown would try to pick up clues from people they were with. "In the U.S., I would read things as one way and I would know how to react, but there I didn't even react because I didn't understand what was happening.

"It's incredibly complicated with skin color, ethnicity and language," Byers said. She would often not speak in public so as not to identify herself as American, except in stores when she would be followed so closely as to be intrusive, and she would pointedly say, "Hi, how are you?"

"They would hear my American accent and immediately stop following me. I would use my identity to my advantage and then confront the guilt that came with that because other people don't have that advantage.

"On the study tour, we and the other black students would find ourselves separating individually and trying to reflect and understand what was happening to us," Byers said. "You try to contextualize." 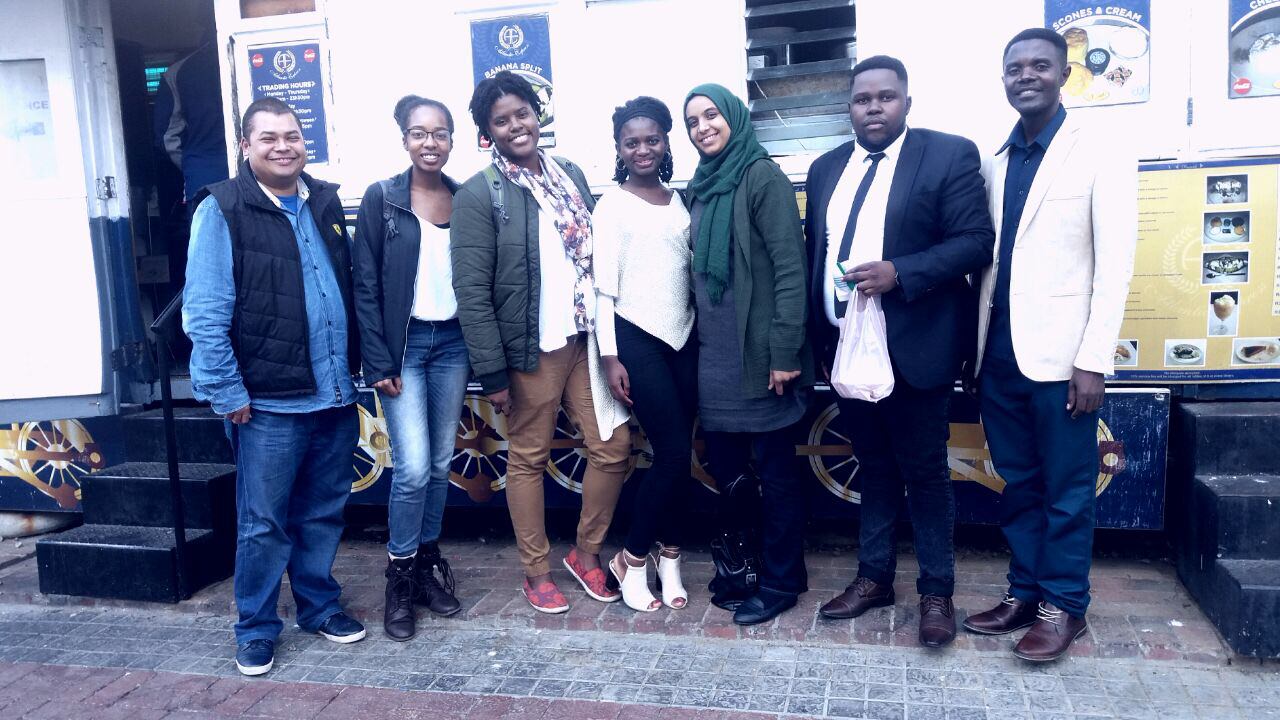 Ayanna Byers and Shaunda Brown (second and third from left) with other employees of the Office of Leadership and Social Responsibility at the University of the Western Cape, including their supervisor, Garth van Rooyen (far left)

Although race relations in South Africa have changed since the end of apartheid, she nevertheless felt the strain of having to "try to have a smile and interact with administrators at universities who are still doing not-great things."

An important realization during their internship at the University of the Western Cape for Byers and Brown was that Western-style solutions did not apply to local issues.

"We had to be mindful of not seeing things through a Western perspective, like 'This would be so easy, we should just do this,' instead of going into the communities to see what they really need," Byers said. "No, there's a different context, different resources. Food insecurity is a big, big issue, for example."

The topic of food influenced many parts of their student affairs experience, from addressing student basic needs down to daily conversation with their supervisor. "Food is a big part of the culture there," Byers said.

In contrast to BGSU, their office was in the student union, a large building "with birds flying around and sand drifting in," Byers said. On the ground floor of the union was a small farmers market where they bought their produce for the day — very fresh tomatoes, avocados and vegetables — and passed a table where a local woman sold notions. She remembered when BGSU faculty member Dr. Christina Lunceford, their mentor, had been there and always greeted them warmly. 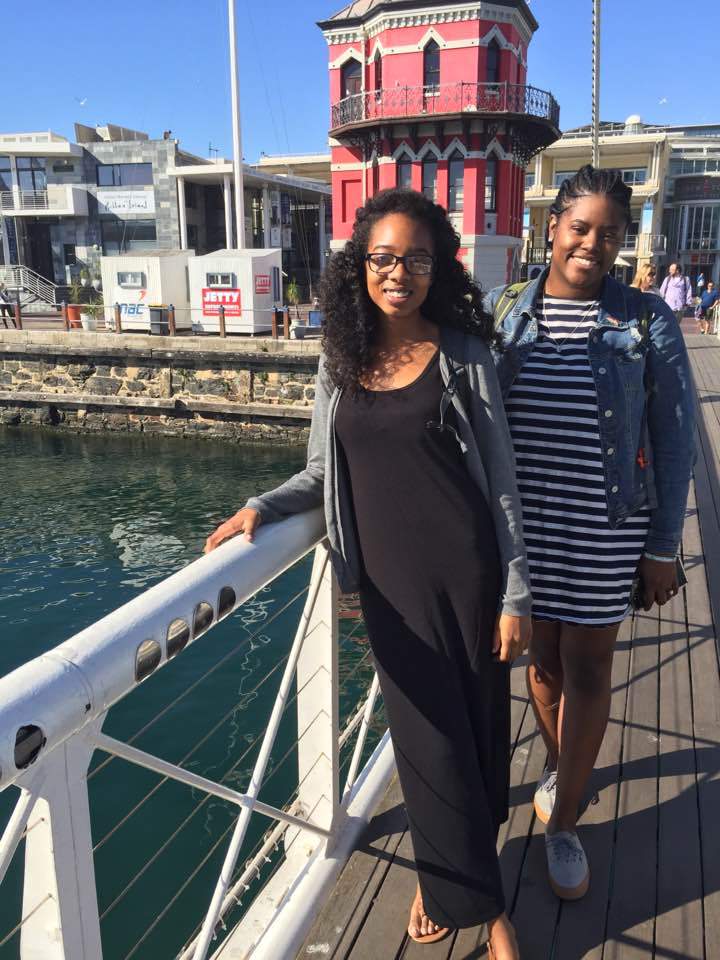 They also passed buildings that still bore signs of past protests and sophisticated graffiti calling for non-Eurocentric education, black power and the end of high costs and debt for students (the "Fees must fall" movement), and stating "[Cecil] Rhodes must fall," a reference to the former British prime minister of the Cape Colony in the late 1800s and a committed imperialist seen by South Africans as the prime symbol of oppression.

"There was evidence of things that have happened there and are still happening. Once we had to leave work because of protests."

In addition, student governments, or Student Representative Councils, in South Africa are directly politically affiliated with national political parties, and SRC funds can go toward the national parties' agendas, Byers said, noting, "Imagine if our Undergraduate Student Government were Republican or Democratic. It's incredibly complicated. There are so many different parties in South Africa.

"How do you deliver student affairs programs in a fraught environment like that?"

The effort of processing so much political, social and personal material left her exhausted by the end of each day, Byers said, and she was relieved that at night gates around the university were locked so she did not have to face the idea of going out in the evening.

"I came back with a more complicated viewpoint," she said. As a mentor to other students and graduate coordinator in the SMART (Students of Color Mentoring, Aiding, Retaining and Teaching) Program, a retention initiative in residence life that reaches about 130 students first year, mostly students of color, she found herself, perhaps surprisingly, when helping them with problems, "not more empathetic, but my reactions were more critical. I feel more removed from the immediacy of decision making and I'm able to take a step back and take a breath. I'm more likely to respond with a question. I have a deeper desire to understand. I know now that lack of understanding leads to conflict.

"Sometimes we feel a need to act immediately, or we're stressed out. I know that if a student is upset that we made a decision that's going to ultimately protect them, it's OK, they'll live.

"If someone says something hostile, I'm more likely to respond with a question rather than a comment, to find out where they're coming from. It's exhausting, instead of just spouting off, but I listen now for people's experience. My students are getting frustrated with me because I ask them, 'Did you ask them what they meant or did you assume you knew what they meant?'

"I'm more sincere since that trip and I've fallen into a deeper desire to understand. In my life outside the University, as well, I let myself be less bothered now."

Along with that seminal book from her childhood that she still keeps with her, another book given to her has been powerful. "The Four Agreements" serves as a code of conduct and guide to ridding yourself of things that take your joy, she said. The agreements are: Be impeccable with your word — speak with integrity, say what you mean; don't take anything personally; don't make assumptions, and try your best.

"I found that really useful. I am trying to keep going with that," Byers said.