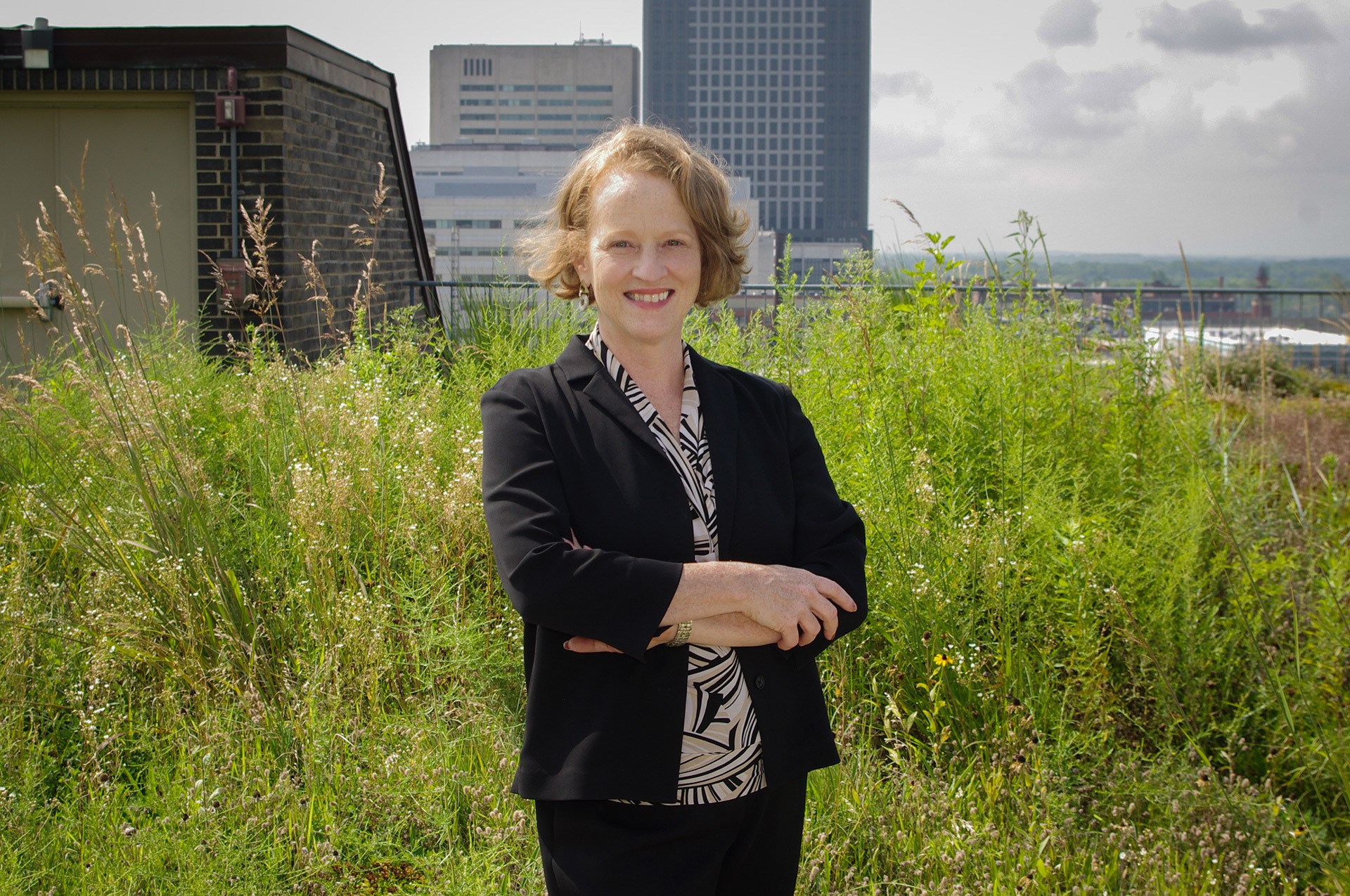 Photo credit: Ohio EPA
Laurie Stevenson '88 is the director of the Ohio Environmental Protection Agency. She is standing atop the agency's headquarters, which has a 'green roof,' in downtown Columbus.

Photo credit: Ohio EPA
Laurie Stevenson '88 is the director of the Ohio Environmental Protection Agency. She is standing atop the agency's headquarters, which has a 'green roof,' in downtown Columbus.

When Laurie Stevenson graduated from Bowling Green State University in 1988 with a Bachelor of Science in environmental health, she had several job offers to choose from in an emerging field.

Stevenson took a position as a hazardous waste field inspector with the Ohio Environmental Protection Agency, and three decades later she now leads the agency.

In January, Gov. Mike DeWine appointed Stevenson as director of the Ohio EPA. She most recently served as deputy director for business relations, where she served as a primary contact for regulated entities to help coordinate permitting activities within the agency. She also served as chief of Ohio EPA’s Division of Environmental and Financial Assistance.

A public servant of more than 30 years, she previously served as the industrial liaison in the director’s office and managed Ohio EPA's small business assistance office. She held previous positions in the agency’s division of hazardous waste management.

“As you can imagine, after spending 30 years here at the EPA, it was a huge honor just to be considered and an even bigger honor to be selected,” said Stevenson, who also holds a master’s degree in public health from Ohio State University. “I think what’s really interesting and exciting to me is, I came from within the agency. I think the governor has selected a great team of cabinet directors to lead our agencies and move Ohio forward in positive ways.

“I’ll be honest; this is something I never really expected. If you would have told me when I started off as a field inspector that 30 years later I would be the director of the agency, I would not have believed you. I’ve had such a great experience here. There have been so many great opportunities to grow and to expand and learn and work with a fantastic team. Chances like this don’t come around but once in a lifetime. I’m excited and just want to do my best and leave a good legacy here and get my team prepared for what’s happening now and for future challenges.”

The Ohio EPA director's office is charged with upholding the agency's mission of protecting human health and the environment. The office directs all activities of the agency, including policy development and rule making, enforcement, strategic planning, coordinating state and federal initiatives, as well as providing outreach, education and assistance to the regulated community and citizens.

She wants her legacy at the Ohio EPA to be to continue setting the stage for the agency to be a leader on issues that affect Ohio and the country as a whole. She hopes to succeed by helping to make a substantive, positive and measurable impact on improving Lake Erie and the state’s rivers and streams.

“Making our mark on improving water quality is a major cornerstone and will be part of my focus as director,” said Stevenson, who grew up in Findlay, Ohio. “Improving water quality throughout Ohio, including Lake Erie, is one of the governor’s top environmental priorities. His expectation is for the EPA and the Departments of Natural Resources and Agriculture to work together to come up with a comprehensive, statewide plan of action.”

That plan is called the H2Ohio water quality initiative, which was introduced by the governor in the state budget bill. It will create a fund that will be used to protect Ohio’s water quality for water programs across the state, including Lake Erie and other lakes, rivers and waterways.

She also recognized the role of universities in important research related to harmful algal blooms in Lake Erie and other areas of the state. BGSU, funded by a $5.2 million grant, recently created the Great Lakes Center for Fresh Waters and Human Health.

“Here at the agency, we certainly are relying on partnerships with a lot of people,” Stevenson said. “It’s a matter of the scientific and academic communities and the government coming together to work on solutions. There are a lot of stakeholders who are very vested in this issue and are devoting a lot of time and energy and resources to it. It requires a multifaceted approach with a lot of people rolling up their sleeves, including universities and researchers. It’s an important issue for all of us.”

In addition to water quality, there are other emerging environmental issues in Ohio.

“We always are working to address air quality to make sue that we have strong regulatory programs in place that we’re diligent about maintaining air quality standards,” Stevenson said. “We also have aging infrastructure across the board, so we’re working with a lot of communities right now to make sure that they’re drinking water and waste water infrastructure is maintained. Sustainability is another major issue, so enhancing markets for recyclable material and life cycle analysis to figure out how we can be better stewards and be more sustainable is also a big part of our focus.”

Due to environmental issues such as air pollution and toxic waste as well as conservation efforts to save natural habitats were major influences as Stevenson was deciding on a college and a major.

“I felt like I wanted to be in the environmental field,” she said. “Energy conservation was a big thing in the ’70s and ’80s with some pretty significant pollution events. Not that I was super knowledgeable at the time, but I knew I could make some kind of difference. Once I arrived at Bowling Green, I drove my path toward environmental science and environmental health.

There were just a lot of experiences and opportunities that were provided to me through Bowling Green that really helped reinforce that ‘this was the right path for me.’ My advisers were great. I worked closely with Dr. Gary Silverman, who was the head of the program at the time. He was very influential for me and guided me through my college experience.”

“Laurie was very impressive as one of the very first students in the newly developed environmental health program,” said Silverman, who taught at BGSU from 1986 to 2012. “She showed great ability and a deep commitment to protecting the environment and human health. She will do fabulously as the new director of Ohio EPA.”

Stevenson said she was able to hit the ground running once she started at the Ohio EPA, thanks to BGSU.

“The field was pretty open when I stepped into it in the late ’80s in terms of jobs,” she said. “I got offers immediately after I graduated. I had two positions within the EPA offered to me and I ended up choosing the one focused on overseeing hazardous waste requirements as a field inspector. I really feel that the internships I had while attending Bowling Green were instrumental in finding employment after graduation.”

One of her internships was with the company Brush-Wellman, a manufacturing facility located outside of Elmore, Ohio. During her internship, she helping the company with environmental compliance work and air monitoring. Stevenson also had an internship with the Wood County Health Department, where she worked with their environmental heath team, shadowing one of its inspectors.

“It was a good taste of what I could expect from both the private and public sectors,” she said.  “Both were great opportunities for me.”

Stevenson wants current and prospective students to know that they should be willing and ready to take full advantage of all the experiences and opportunities that are offered at college.

“I love BGSU — Bowling Green is near and dear to my heart,” she said. “I encourage students to diversify your experience and really get as much as you can out of your academic experience.  Take advantage of all of those opportunities that are out there, including internships and projects. That’s the only thing I would communicate to them: Take advantage of what’s in front of you and never underestimate the potential that you have.”