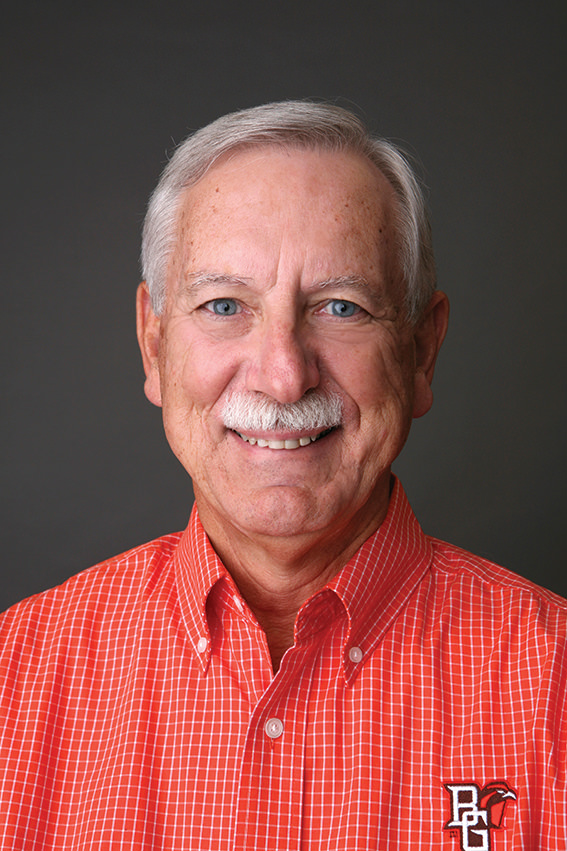 DeCrane still inspires student involvement.This year’s Gregory T. DeCrane Applauding Excellence ceremony marked a special milestone. It was the 20th anniversary of the naming of the event after DeCrane, former dean of students and longtime leader of the Office of Student Life.

Though he retired in 2000, Applauding Excellence, and student activities at Bowling Green State University, are still imbued by his spirit, say the organizers. Tangible reminders of his impact on the University are all around. DeCrane played a vital role in transforming SICSIC and facilitating the design of what is today the Bowen-Thompson Student Union .

“It’s a great honor and very humbling to come back and see the students walk across the stage and hear about their accomplishments,” DeCrane said. “It shows they took advantage of all the opportunities to get involved on campus.”

In honor of his contributions, in 1999 the awards ceremony was named in DeCrane’s honor.

“Gregg significantly impacted the student culture at BGSU during this time on campus and continues to support the importance of student involvement,” said Jodi Webb, associate vice president for student affairs and a former colleague of DeCrane. “He has given his time to not only SICSIC, but to various student leaders and alumni as a committed mentor and student advocate.”

DeCrane sums up his philosophy succinctly: “You can go to class and receive a degree, but you can get involved and receive an education.” That belief guided him throughout his career and was informed by his own experience as a BGSU student.

“I always tell students the greatest education I had was my first year in my residence hall my first year here,” he said. As a native of the very homogenous west side of Cleveland, having the experience of living in a BGSU residence hall allowed him to build friendships with students from richly diverse backgrounds.

“The world really opened up for me through getting to know them,”  he said.

In addition, DeCrane was a first-generation college student, and his mother had cancer during his junior high and high school years, which also limited his ability to get involved in school activities. Then he worked for a year and half before coming to college.

“So the whole thing was new to me,” he said. “I always told students and their parents at what we used to call pre-registration and orientation that if students don’t take advantage of the opportunities to get involved, they miss a valuable part of their education.”

Being involved also paid off in romantic ways. As a member of the University Activities Organization, he helped organize a Homecoming concert. Through friends, he was set up on a blind date for Homecoming with a student who was also involved in Homecoming, through her sorority. Their Homecoming date was the first time they met, and they never parted. Today, he and his wife, Darlene, have been married for 50 years and are also celebrating their 50th year as BGSU graduates.

Much as he later mentored students when working in Student Life, DeCrane had some important mentors as a student. After getting his undergraduate degree in business, he was in the first College Student Personnel class taught by Dr. Gerald Saddlemire, after whom the former Student Services Building was named. The graduate program Saddlemire created is today widely regarded as among the top in its field.

But DeCrane had to persist to get his CSP degree. “That turned into a four-year program for me,” he said. “I was drafted into the Army and sent to Thailand for 18 months. But that experience fostered our love of travel, and now Darlene and I have spent 10 years traveling abroad. We’ve gone to 32 countries.”

Another mentor was Richard Lenhart, associate dean of students and director of the University Activities Organization (after whom the Lenhart Grand Ballroom in the Bowen-Thompson Student Union is named), who offered him a job after graduation managing a food operation in the union, which allowed him to remain on campus. When a position opened up in Student Affairs, DeCrane was prepared to take it and start the Student Life area.

“Jill Carr, longtime student affairs professional and retired vice president for student affairs, came over from Residence Life and we had the opportunity to formulate Student Life,” he said. “I had a great staff the whole time I was there.”

It was during that time that the University’s spirit group SICSIC nearly went under, having lost sight of its original mission as a spirit group for the whole University, but DeCrane saved it. He interviewed SICSIC’s members. He scoped out problems the group had, including a lack of inclusion, and instituted new policies. Thanks to his mentoring, SICSIC opened up membership to all BGSU students and has thrived ever since.

Today, President Rodney Rogers is an honorary SICSIC member and an active supporter. “He’s been so wonderful with the group, and so appreciated by the members,” DeCrane said.

One of DeCrane’s happiest memories was serving as chair of the committee to redesign and expand the student union.

“It was a fantastic experience,” DeCrane said. “We met for five years before ground was ever broken. We had focus groups and students shared what they wanted to see in the building. The great thing was all that student input going into the planning. It’s so gratifying to be there and see this is what the students wanted.”