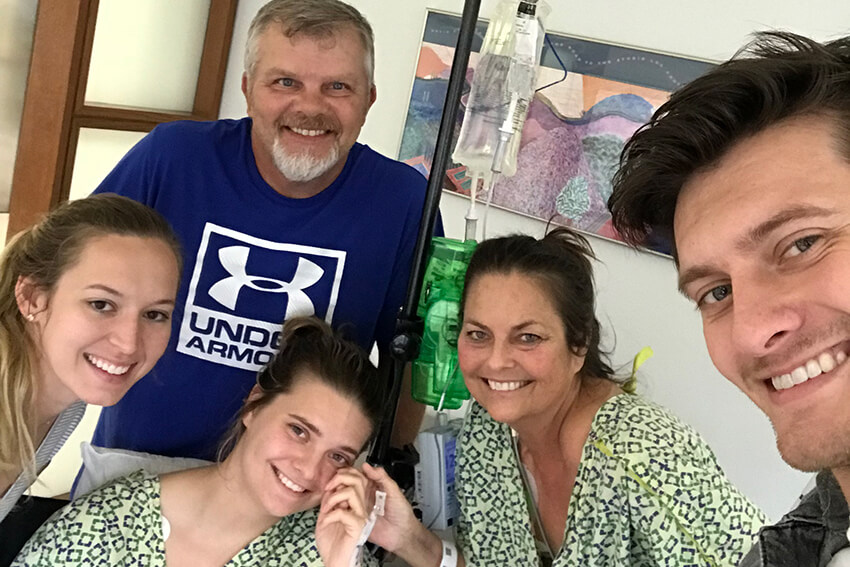 As the Butler family of Bellefontaine enters the Christmas season this year, they will have many gifts to celebrate, but undoubtedly the greatest is the gift of life. Daughter Madison this fall donated a kidney to her mother, Stephanie, who was in seriously failing health. Now Madison is back at Bowling Green State University getting ready to graduate in May with a bachelor's degree in communication sciences and disorders and her mother is enjoying newfound energy and vitality.

“They’re a huge part of why I’m still on track to graduate,” she said.

For Madison, there was never a question but that she would give her mother a kidney if she could, she said. When she turned out to be a perfect match, she never looked back.

“Maddi had no hesitation at all,” Stephanie said.

“People tell me what a selfless thing I did, but for me it was not selfless, but selfish,” Madison said. “I wasn’t ready to lose my mom, and this was something I could do. Her mother had passed away during the time she was sick last year and I saw how hard that was for her. My mom is an amazing, amazing woman. I love her so much and I was not willing to give her up.”

Stephanie was indeed sick. After a long siege of kidney failure caused by a reaction to the medications for her double lung transplant nine years ago, she was on dialysis and her health was declining rapidly as she awaited a transplant. In fact, Madison said, although she had originally planned to make the donation over winter break, “every time I went home I could see her deteriorating. Her eyes and her skin were yellow and sunken and she had less and less energy. I knew we couldn’t wait.”

Although it took a bit of convincing for her mother to accept a kidney from her child — “She said, ‘I’m supposed to be taking care of you’ when my brother and I got tested to see if we were a match” — the family prevailed upon her and she finally assented.

So on Sept. 26, the pair underwent surgery at the Cleveland Clinic.

“I didn’t worry about myself,” Stephanie said. “I just wanted it to be good for her. It’s much harder for the donor than for the recipient. She went from having two amazing kidneys down to one, and I went from almost none to having one amazing kidney.”

Madison said it was obvious immediately that the transplant had been a success.

“I got to see her two hours afterward and her color was already amazing. Now she looks totally different — her eyes are so bright and her skin is plump.”

While her mother was up and walking almost immediately, for Madison the recovery was much more difficult. It turned out she has an extra vein on her kidney that made it necessary for her surgeons to remove a bit of her lower, “false” rib to get access, which has added considerably to the pain and the length of the healing process.

“After the surgery, we were on opposite sides of the floor at the Cleveland Clinic and I was glad because I didn’t want my mom to see how much pain I was in,” she said. “But I made this choice and I knew what I getting myself into. I would do it again any day!

“I had never broken a bone or even had my wisdom teeth removed, and it was new to me to not feel well. But my brother, Blake, came in and said my mom was already up and sitting in a chair, so I should get myself out of bed.”

That is an indicator of the extreme closeness of the Butler family. Blake was crushed that he was not a perfect match for his mother, but, in the end, it was for the best, Madison said. He physically picked her up and moved her, for example, which she could not have done for him.

“Everyone had their role,” she said. “We all worked as a team.”

Because of their mother’s many years of illness after getting the lung disease LAM, she and Blake and their father, John, were used to dealing with illness. “My brother and I knew how to push a wheelchair and clear oxygen lines from the time we were in fourth or fifth grade. After this, I have even more empathy for what people with illnesses are going through.”

Following the surgery, she and her mother moved to the nonprofit Transplant House, near the clinic, for their first period of recovery, then Madison moved back home for a couple of weeks before returning to her apartment in Bowling Green, where she rested for another week. Getting her energy and focus back is a slow process, she said, but she is making good progress.

During the whole time of the surgery and her recuperation, Madison said, her faculty were emailing her regularly to check on her and send words of encouragement. This helped allay her considerable anxiety about jumping back into her schoolwork.

“They really took time to get to know me and were really present in my recovery,” she said. “I can’t say enough good things about Kim Traver. She emailed me immediately the night after surgery. When I got back she called parking services and arranged for a special parking tag for me. She told me to just ‘take a breath’ and had me sit in on classes at first. She didn’t allow me to take the first or second exam right away but gave me time to catch up.”

The same was true of Wagner, whom Madison admitted to having felt a bit intimidated by at the start of the semester.

“She is so smart and such a powerful woman,” she said. “I was the most worried about making up this class. But she met with me several times outside of class and gave me time to make up what I had missed, and she worked with my lab instructor to accommodate me. She also had me wait to take my exams. She has been a great mentor to me.”

Dr. Robyn Miller, a lecturer in the College of Education and Human Development with whom Madison has taken class every year, and Joanne Sommers, in Human Development and Family Studies, were very supportive and took a personal interest in her well-being, she said. Even Rebecca Sidders, whose American Sign Language course was the one class Madison had to drop, emailed to stay in touch.

“My faculty have been amazing,” Madison said. “I give them all the credit for me being here and able to graduate. They make you feel like a person and not just a number. I love BG — I don’t want to leave!”

Madison plans to take a year off after graduating to work and consider her options. Her very hands-on classes with Traver have generated a strong interest in audiology, and she might pursue that path. She is also interested in working as a child-life specialist, helping children through difficult times such as she went through during her mother’s lung disease experience.

She will give talks for Life Line of Ohio, educating people about organ donation. Her mother is endlessly grateful to the family who donated their daughter’s lungs to her and “keeps her donor’s memory alive every day,” Madison said.

“I’m very passionate about it,” Madison said. “I’ve been on both ends — seeing someone you love needing a transplant and knowing a family has lost someone. And now being a donor. I would do it again in an instant for anyone in my family.”