BGSU's Hank Blumenthal finds himself ‘In the Soup’ once again 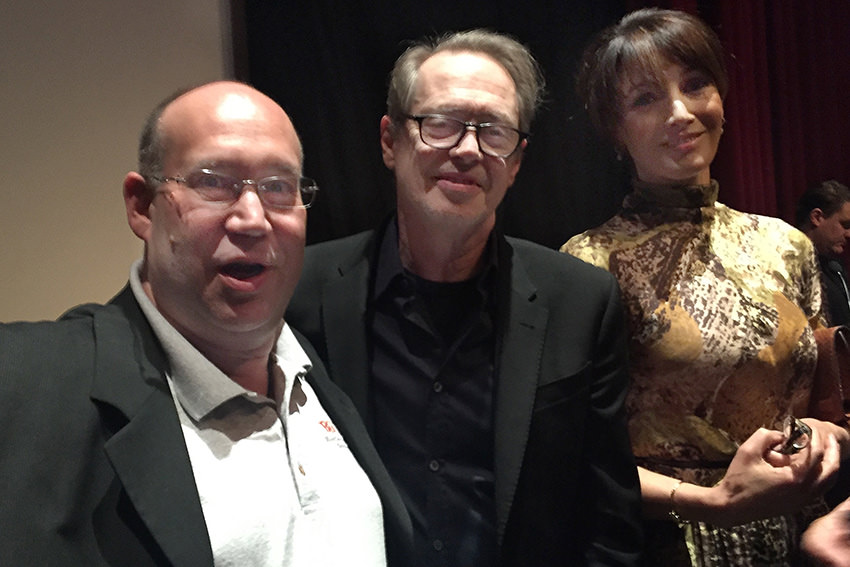 At the Tribeca Film Festival, Hank Blumenthal celebrates with “In the Soup” actors Steve Buscemi and Jennifer Beals.
Tweet

"In the Soup" might be the best movie you've never heard of — unless you were lucky enough to attend this year's Tribeca Film Festival in New York, or were at the Sundance Film Festival back in 1992, where it won the Grand Jury Prize, beating out Quentin Tarantino's cult classic "Reservoir Dogs."

But after its promising début and theatrical release, "In the Soup" pretty much disappeared for 25 years, due to problems with the distribution licensing and its financial backers. Except for frequent showings on the Bravo channel for about five years after its release, it has not been seen since, said producer Dr. Hank Blumenthal, now a Bowling Green State University assistant professor of visual communication technology.

Until this spring, when it was chosen as one of only three films for the Retrospective portion of the Tribeca program (often handpicked by Martin Scorsese), along with "Schindler's List" and "Scarface."

Once again, the indie movie received critical acclaim, appearing in numerous "best of" lists put together by critics to help guide viewers through the 101 films on the festival program. Director Alexandre Rockwell's quirky autobiographical comedy was called an "indie gem" and "indie classic" by reviewers from the New York Times, Filmmaker, WBGO and others, who celebrated the chance to see it again.

This is all great news for Blumenthal and for Rockwell, who launched a Kickstarter campaign to create a restored print of the film, of which only one, damaged archival copy had survived. Now the film has a second chance at success with a new theatrical release and can be sold to a cable channel such as HBO, or even Netflix or Amazon.

He was in New York in April for the movie's long-awaited revival with Rockwell and cast members Steve Buscemi, Jennifer Beals, Sam Rockwell (2018 Best Supporting Actor Academy Award-winner for "Three Billboards Outside Ebbing, Missouri") and cinematographer Phil Parmet, who participated in an on-stage question and answer session after the screening. The all-star cast also included the inimitable Seymour Cassel, Will Patton, Jim Jarmusch, Carol Kane and Stanley Tucci. Blumenthal even made a cameo appearance, selling stolen stuffed elephants off the back of a truck.

"It was the funniest thing, watching the movie again," Blumenthal said. "I saw it got laughs and the same responses in exactly the same spots as it did 25 years ago."

"In the Soup" stars Buscemi as Adolpho Rollo, an aspiring screenwriter determined to get his script produced. In desperation, he places a newspaper ad seeking financial backing, which is answered by a flamboyant con man, Joe, played by Cassel. Joe has grand plans for acquiring the money, which drag the unwitting Adolpho into a life of crime. Adolpho is also struggling with unrequited love for his neighbor, played by Beals of "Flashdance" fame.

It was shot in New York's East and West Villages, using street locations and an old building they took over East Fourth Street and the Bowery. Many of the cast and crew walked to work. "Most of the people were in the same crowd; we lived within a couple of miles of each other in the East or West Village," Blumenthal said.

Before "In the Soup," Blumenthal had worked extensively as a line producer and in post-production, among other roles, "but this was my first true producing credit," he said, "and a lot of things surprised me. I had to be on set a lot, about 50 to 60 percent of the time. And it was partly because they needed to have 'daddy' around. I needed to be the authority figure, dealing with people and sometimes putting out fires. They said, 'It goes better when you're here.' I was also the one who had to watch all the dailies, tell them how they were doing. I can take credit for some of the creative parts of the movie, but it was really the director and actors' movie."

Blumenthal noted that today, these techniques are so widely employed in movies that it is almost inaccurate to refer to them as "films." In addition, he says, "My research and my practice can be both separate or intertwined, as when I do a documentary or an augmented reality museum environment, or a chapter for a book."

He has worked for digital agencies such as RGA and Possible, developing future design and interface technologies for interactive cable systems and games, and in the cable business. He was director of post-production for Bravo and IFC before it was sold to NBC, then owned by General Electric.

"I became an orphan because I didn't want to go to Burbank," he joked. "I've gone back and forth between interactive and digital. I maintained my apartment in New York up until a few years ago and spent summers there while I was at Georgia Tech. I taught producing at the School of Visual Arts."

His BGSU position is his first full-time teaching job, where he brings his longtime industry experience, expertise and cutting-edge knowledge to prepare students for the next generation of communications, whether in entertainment, commercial ventures or education. But Blumenthal said he not only likes sharing the technology aspect of communications with his students, but also the pleasure of introducing them to the world of movies as a vehicle for learning.

"Teaching is very enjoyable. You have students who know they like movies but they really know nothing about them. So you can pick your favorite 14 movies, say, and watch how they respond. It's so much fun."