Students Honored for Research and Scholarship 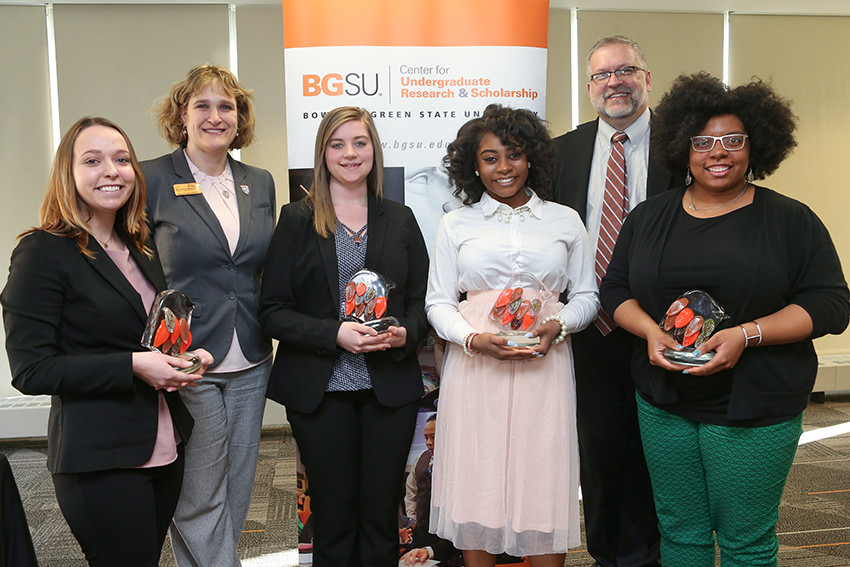 Five BGSU undergraduate researchers were honored March 15 for their presentations at the 2018 Undergraduate Symposium on Diversity held earlier this semester. Dr. John Fischer, interim provost and senior vice president for academic affairs, congratulated the winners, giving each a handmade glass award created especially for the symposium. The annual event, which looks at “Opportunities and Challenges for the Inclusion of Diversity in Higher Education and Society,” is sponsored by the Center for Undergraduate Research and Scholarship, led by Dr. Cordula Mora.

“The breadth and depth of the student-generated posters at this event was again very impressive this year,” Mora said. “This event is an important reminder that studying all aspects of diversity early on in an academic career plays a crucial role in preparing our students here at BGSU for their future as engaged citizens.”

Poster presentations were given in two categories: course-based and faculty-mentored individual studies.

Two student presentations were honored among the course-based posters.

Tiffany Smith and Kirsten Seele’s study was “Addressing Food Insecurity on College Campuses with Food Pantries,” for a Senior Seminar in Nutrition and Dietetics with Food and Nutrition faculty mentor Carrie Hamady. Smith and Seele found that, although food insecurity — the lack of access to safe, affordable, and nutritious food — among college students seems to be rising, there are few well-known programs to assist students going through periods of food insecurity. While the problem can have many causes, from financial hardships to lack of transportation or budgeting abilities, ultimately, all forms of food insecurity can have serious impacts on a student’s curricular abilities, and has been associated with poorer self-reported health and eating behaviors and lower grade-point averages. “Awareness needs to be increased on campuses so that students can get involved with food insecurity-related volunteer work, learn about local resources, and get a short-term supply of healthy food. One of the ways to raise awareness of these topics is to host a mobile food pantry on a college campus so that students can get connected with the resources they need,” said Smith and Steele.

While some social movements are tied to specific ethnic or racial groups, the #MeToo movement seems to have bridged cultures and nationalities. BGSU Firelands student Melanie Myers analyzed this in her study “The Intercultural Phenomenon of MeToo & the Symbolic Convergence Theory,” conducted as part of her Intercultural Communications class with Dr. Raymond Schuck, associate professor of humanities. The movement’s main goal to take a stand for sexual assault victims everywhere. “The Symbolic Convergence theory can help explain how #MeToo has had such a large effect among cultures as it accounts for the appearance of group consciousness with the sharing of emotions and motives, all resulting with a meeting of minds,” Myers said. Using information gathered from websites from multiple countries, along with tweets from victims of sexual assault all over the world, Myers was able to make the connection of the #MeToo movement to the Symbolic Convergence theory.

Two students were honored for their faculty-mentored individual posters.

Diamond Spratling, an environmental policy and analysis major, asked the question: “What Is Going on in My Backyard? Examining the Components of a Healthy Community.” Working with Dr. Andrew Kear, an assistant professor of political science and in the Department of the Environment and Sustainability, she evaluated a low-income community of color in Black Hills, Michigan, to determine if it meets the qualifications of a healthy community. She analyzed variables identified in existing literature and research used to evaluate community health relating to education, transportation, employment, food, housing, crime, health and demographic characteristics. Using geographic information systems (GIS) mapping data, actor interviews and qualitative analysis, she found that Black Hills does not rate well for a number of these variables. “Inadequate education opportunities, elevated crime rates, childhood mental and physical health issues, decaying housing, limited economic opportunities, pollution, insufficient access to healthy foods and restrictive zoning spur feelings of exclusion and stress, thus undermining Black Hills’ overall community health,” Spratling found.

Leigh Dunewood won for her project titled “Examining the Social Experiences and Academic Persistence of High-Achieving Students of Color at a Predominantly White Institution. Working with students both in and outside of the Honors College at BGSU, a predominantly white institution, Dunewood conducted three focus groups containing different sub-groups of high-achieving students of color. She identified areas where students gained or lacked support in their campus community, and offered suggestions for increasing resources and support for racially minoritized student populations. Her mentor was Dr. Sarah Rainey, an associate professor in the School of Cultural and Critical Studies.