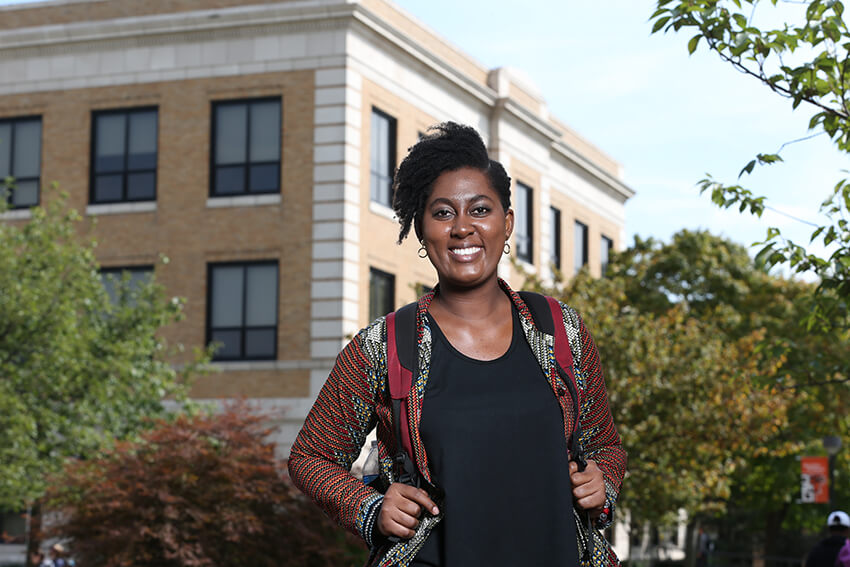 She majored in political science and minored in archaeology during her undergraduate studies in her home, Ghana. Yet, strange as it may seem, it was her hair that played a role in her coming to Bowling Green State University and becoming a graduate student in American culture studies, specializing in gender, ethnicity and identity.

Amemate was a strong student throughout her schooldays in Keta, a fishing and farming community in the Volta Region of Ghana, about three hours’ drive from the capital, Accra.

“I got the second best grade in my junior high school batch, which was unusual for a girl, and I was very proud of myself,” she said. “I wanted to go to the best senior high school in the municipality and the best university in Ghana.”

In a country where “women normally take a secondary role,” Amemate stood out. Not only did she go to Ghana’s premier university and work as a women’s organizer in two student groups while pursuing her first degree, she even ran for Student Representative Council president to change the norm in which women compete for assistant positions and largely avoid positions such as president.

“Because of corruption and changes that shouldn’t be happening, my running mate found out his grades had been falsely lowered to make him ineligible to run. I didn’t have a choice than to fight for our rights through the judicial system,” she said."Everyone here is very helpful, even beyond academics."

She had demonstrated her willingness to lead and take a stand for democracy, but it was a campaign she led on social media encouraging women “to keep their own hair” that would turn out to have serious consequences for her future. In Ghana, she said, “the greater percent of women wear wigs, or else they straighten their hair and bleach their skin. Natural hair is not a norm.” This might be a holdover from colonial times when the British established mission schools and the system of government, and Ghanaian culture became Westernized.

But as the daughter of a strong and unconventional mother who had to fend for her family of four children alone after their father abandoned them, Amemate had grown up with a different role model than most girls. Her mother had to work hard and “was always on the go,” Amemate said. She wore trousers and kept her hair natural, for which she was criticized by the other villagers and even accused of having “witchcraft money.” A Catholic from childhood, she had to leave the church when it was demanded that she sit in the back of the church since she failed to marry according to Catholic law. Amemate’s father, meanwhile, was not subjected to any of this harsh judgment despite his failure to provide for his family.

“I don’t know anyone as strong as my mother,” Amemate said. “She was a nonconformist real woman and a practical mom.”

After her college graduation, Amemate was working as a consultant and business development manager for a human resource management firm and was planning to attend a conference with her boss. Instead of the typical wig worn by Ghanaian women, she had done her hair in “twist-out” the day they were to leave and was waiting outside for him to pick her up.

“But when he got there, he said my hair was inappropriate and said, ‘You can’t follow me to the conference like that. This hair is not appropriate for a professional environment.’ He left me standing by the roadside. It was that incident that made me start the campaign on social media, and it went viral.”

Inspired by her experiences, she decided to go on to law school and made her first application attempt. She passed the exam, but when she got to the interview, the interviewers focused on her ethnicity and the election court case from her undergraduate days and she was rejected. “I was very sad,” she said.

But a BGSU alumnus, the Ghanaian anthropologist Klevor Abo, had seen her writings on Facebook (she usually expresses views on sociopolitical issues happening in Ghana and the world) and encouraged her to apply here.

“I told him no! I didn’t want to study American culture, I want to work in Ghana, but he told me about the specializations in women’s studies and ethnic studies, so I took a look.”

Applying to BGSU, Amemate found a warm welcome and generous assistance. “Rebekah Patterson (American culture studies secretary) communicated with me. She always replied on time and she knows everything. She is really great and she was my lifeline,” Amemate said. “Everyone here is very helpful, even beyond academics. Dr. Timothy Messer-Kruse is one of the nicest people I know.”

Luckily, the personal warmth she encountered offset the shock of life in the Midwest. Coming from a place “where every day is summer, the lowest spot here is the weather,” Amemate said humorously. “I have never seen this level of cold.”

She finally gained admission into law school at the same time she got into BGSU. Instead of following her long-awaited dream of studying law and focusing on women’s rights, she decided to come to BGSU to experience new culture, meet new people and learn about the United States.

In the fall semester, she was a teaching assistant in Introduction to Ethnic Studies, and her own classes included Theories of Race, Ethnicity and Multiculturalism, Theory of American Culture Studies and Introduction to Feminist Thought.

“Amelia was one of the most outspoken students in my graduate seminar and elevated our discussions by reframing many topics from a non-Western and Ghanaian perspective,” Messer-Kruse said. “I learned much from her this term.”

Her unlikely journey to Bowling Green as a result of her refusal to accept sexist norms for women’s hair is a tangible reflection of international discussions and controversies regarding black women’s hair, from rules set by the U.S. Army to narratives in literature, such as the Nigerian writer Chimamanda Ngozi Adichie’s “Americanah.”

With her new knowledge and her graduate degree, Amemate is sure to go on to make a difference for Ghanaian society and Africa. When she returns home, one of her first plans is to lobby for the creation of women’s studies departments in major Ghanaian universities. She also hopes to make contributions toward bringing African perspectives into mainstream Western research.