Summertime in northwest Ohio means fresh corn, festivals and . . . toxic algae. For BGSU biologists Drs. George Bullerjahn and Michael McKay, summer is high season for their research into the causes and patterns of harmful algal blooms (HABs) in Lake Erie, the Maumee River and Sandusky Bay. Their findings may also be of use to communities world wide that are facing the same problem, which affects health, wildlife and economic security.

Bullerjahn and McKay are first authors on a paper published in the journal Harmful Algae, in a special issue devoted to toxic cyanobacteria. “Global Solutions to Regional Problems: Collecting Global Expertise to Address the Problem of Harmful Cyanobacterial Blooms, a Lake Erie Study” details the comprehensive information shared during an international conference held at BGSU in 2015 that brought together more than 100 scientists from six countries and 15 U.S. states to discuss algal bloom formation, what causes blooms to turn toxic, how to detect blooms, and means to prevent and remediate them. The conference was supported by the National Science Foundation and the National Oceanic and Atmospheric Administration.

Additionally, the June issue of the highly regarded journal Environmental Microbiology features a cover photo supplied by McKay and Bullerjahn of their groundbreaking work exploring algae activity in winter. The team has gained international recognition for discovering that algae do grow throughout the winter, producing sufficient biomass that, when decomposed during summer, consumes oxygen, which contributes to dead zones in Lake Erie.

Algae itself is not the problem; in fact, winter algal blooms can be helpful in sustaining fish. But lurking within the cyanobacteria which dominate during summer is a genetic “switch” of sorts that can cause it to produce toxins such as microcystin. Bullerjahn and McKay are intensifying their investigation into what conditions activate that switch.

The BGSU researchers’ multiple projects are supported by a combination of grants from state and national organizations, including $45,000 to Bullerjahn from the U.S. Centers for Disease Control and Prevention to track toxic algal blooms in Ohio. Bullerjahn and McKay’s work directly contributes to the Annex 4 amendment to the Great Lakes Water Quality Agreement between the U.S. and Canada looking at nutrient loads, particularly phosphorus, in Lake Erie that may be contributing to HABs, and quantifying toxic versus nontoxic genotypes.

“The overarching goal of Annex 4 is to develop guidelines for nutrient controls in the lake,” said McKay, the Ryan Professor of Biological Sciences at BGSU. The Ohio Department of Higher Education also contributed $17, 950 to his study, “Early Season (March) Phosphorous Inventory of Offshore Waters of Lake Erie.” Nutrients are a key factor influencing the growth of algae, along with weather and climate, water temperature, wastewater and invasive species.

As the scientists have discovered, the answers to what causes the HABs are complex. Although the cyanobacteria that produce the liver toxin microcystin are present in both Lake Erie and Sandusky Bay algal blooms, it is produced by different organisms in each. In Lake Erie it is Microcystis while in the Maumee River and Sandusky Bay, Planktothrix is creating the toxin. This is a phenomenon of great biological interest to Bullerjahn and McKay. They are extending the projects they have been pursuing, now taking a deeper look into the ecology of the blooms from a genomic perspective.

“We’re seeing more toxic events so we’re trying to understand bloom events in any season at a much higher level of resolution,” Bullerjahn said. “We want to precisely quantify them to understand under what conditions are the genes that cause the organism to become toxic activated or repressed — because there are toxic and nontoxic forms at any time.”

Summer 2016 finds the duo and their student researchers back in Sandusky, Ohio, for a second year to continue work on “Harmful Algal Bloom Detection, Mapping and Warning Network: Sandusky Bay,” a $250,000 study funded by the Ohio Department of Higher Education and aimed at protecting the Sandusky city water supply. Partnering on the effort are Kent State University, Defiance College and The Ohio State University’s Stone Lab research center on Gibraltar Island.

Last summer the team deployed sensors on buoys in the bay to collect data; they are in place again this summer. The sensors monitor water conditions and measure water quality parameters, sending alerts directly to the internet and researchers’ cell phones. The system proved last year that it can provide early warning of toxic cyanobacteria outbreaks to area water plant managers so they can respond quickly and appropriately to the intensity and extent of the toxic bloom.

“Last year was very successful,” Bullerjahn said. “The comprehensive monitoring survey of Sandusky Bay by the sensors showed the input of algae into the water intake. Any way we can keep panic at bay and our plant managers informed is progress.”

The surveying includes not only the sensor buoys but also forays on Department of Natural Resources boats through the bay and along the north shore of central Lake Erie, with a BGSU student on each boat. In addition, “We’ve been working with a class at BGSU Firelands that conducted sampling through the fall and winter until the end of the school year even when the sensors, or sondes, were not deployed,” McKay said.

Beyond providing timely warnings, the Sandusky Bay sensors continue to supply data to Bullerjahn and McKay for their genomic research. They are sequencing the DNA of the organism in the bay, which will give them much greater detail on the its genetic profile in different seasons. Their study “Seasonal Quantification of Toxic and Nontoxic Planktothrix in Sandusky Bay by qPCR (quantitative polymerase chain reaction)” received $31,571 from the Ohio Department of Higher Education. Additional funding comes from an Ohio Sea grant.

“You have a very dynamic system in Sandusky Bay. It’s a shallow, low-oxygen environment,” McKay said. “It’s fed by a river and when there’s heavy rainfall you get nitrogen spikes from agricultural runoff.” Algae use nitrates for growth, so the availability of nitrogen may be playing a major role in the toxic algal blooms. The warming waters of both the bay and Lake Erie also seem to be contributing to the flourishing of toxic strains of cyanobacteria.

The intensive labor required by the various projects has provided opportunities for additional undergraduate and graduate student researchers to be involved. In fact, this year Bullerjahn and McKay said they have more students than ever before.

Some of these students are contributing to the team’s collaborative project with the University of Toledo studying algae’s movements over the course of a day. This project, “HAB Avoidance: Vertical Movement of Harmful Algal Blooms in Lake Erie,” tracks the algae up and down in the water column to see if the relative temperatures and nutrient availability at various depths contribute to bloom formation. The results may provide guidelines for water treatment managers.

“We’ll have 24-hour occupations of sites to conduct sampling and monitoring for cyanobacteria,” McKay said.

A toxic bloom that recently developed in the Maumee River has also garnered their attention. In early June, the Defiance County General Health District issued a warning that a HAB was detected on the river in the vicinity of the Defiance City water treatment plant. Testing conducted on a sample drawn from the river on June 2 identified the bloom to be dominated by Planktothrix with microcystin toxin accumulating to over tenfold higher levels than the revised U.S. Environmental Protection Agency national health advisory levels for microcystin exposure to adults and school-aged children.

Blooms of Planktothrix are uncommon in rivers, say Bullerjahn and McKay. “This unusually toxic and early-onset bloom of Planktothrix has provided a rare opportunity to glean insights into the environmental factors that promote bloom development and toxicity in the Maumee River,” McKay said. “Over 60 percent of Ohioans obtain their drinking water from surface water sources. As the largest watershed of any Great Lakes river, the Maumee is one of the state’s primary freshwater resources, providing potable water for hundreds of thousands of residents spanning 17 Ohio counties as well as providing recreational opportunities and critical ecosystem services in this heavily agricultural area.”

The two researchers are looking at not only current conditions in the lake throughout the entire year, but also ahead to changes that can be predicted as the climate warms and winter ice coverage in the lake declines. With all the human and ecological changes that have occurred and continue to occur, it does not make sense to hope to return the lake to its condition 100 years ago, Bullerjahn said, but only to manage factors such as wetlands preservation and restoration in order to prevent further danger. 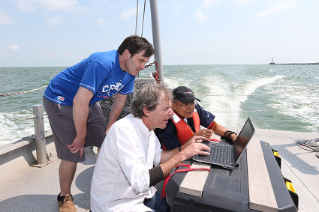 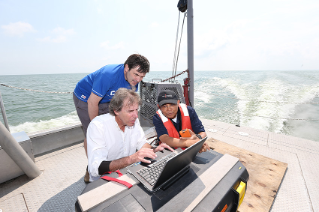 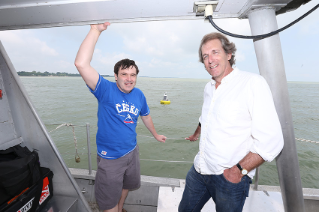 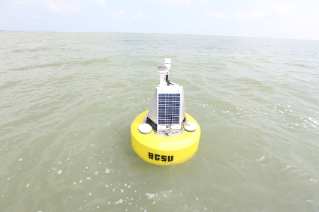 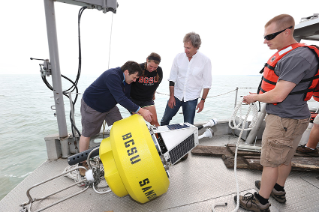 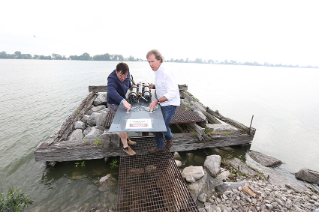 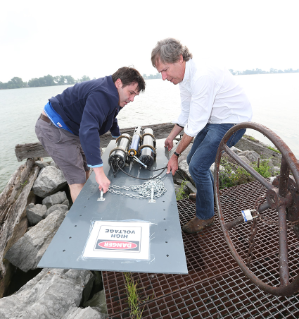