Intercollegiate Ethics Bowl is a debate competition for undergraduates based around ethically-challenging cases.  It is naturally suited to students who have studied philosophy but is open to all majors.  It originated as a teaching tool of Prof. Robert Ladenson's at the Illinois Institute of Technology as a way to encourage engineering students to think more deeply about the ethical aspects of their profession.  Since then it has blossomed into a nationwide competition, which begins with a series of regional contests in November, from which the top two or three teams qualify for the 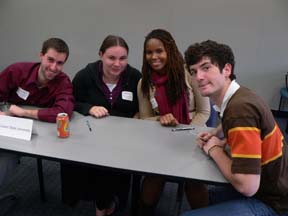 national finals held the following March in conjunction with the annual meeting of the Association for Practical and Professional Ethics.

In the Fall of 2009, BGSU entered its first team in the Upper Midwest Regional competition.  The team, consisting of four members (Nolan Cavano, Brittni Darke, Daniel Lubin and Latifah Street), performed very well, and considering it was BGSU's first attempt, were satisfied with a record of one win and two losses, finishing in sixth equal place out of 16 teams. 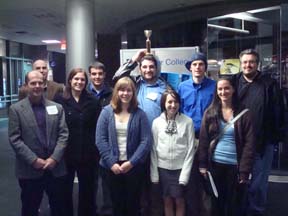 In 2010, there was a greater level of interest and seven students were split into two teams, since the maximum allowed on a team for competition is 5.  On  Team 1 were Chelsea Fuller, Courtney Hutton and Courtney Steinman, while Team 2 was comprised of Tom Cunningham, Scot Hites, Nicole Lepore and Matthew Shadrake with coaches Brad Gabbard, Nick Sars and Ian Young.  Both teams did extremely well.  Team 1 won two of their three matches,  losing only to eventual regional champions Macalester College.  Team 2 won all three of their matches, and finished as regional runners-up after losing to nemesis Macalester College in the final.  In reaching the final, Team 2 qualified BGSU for the nationals in March 2011.

Since then, the team has remained very strong, and in Fall 2015, finished second once more in the Upper Midwest Regional, so competed in the National Championship in March 2016.

In addition, the Philosophy Department also sponsors the Bioethics Bowl team, which is a similar competition with a somewhat narrower focus than Ethics Bowl and is held each year in conjunction with the National Undergraduate Bioethics Conference.  In 2015, the team traveled to Tallahassee, Florida for this competition and made it as far as the quarter finals (see link to article below).

We are looking to recruit new team members, so watch out for information about sign-ups, or feel free to contact Ethics Bowl coach Ian Young at any time: iyoung@bgsu.edu

For more information about the Intercollegiate Ethics Bowl Competition, including copies of cases used, click on this link for their website.

BGSU Ethics Bowl and Bioethics Bowl Teams in the Media