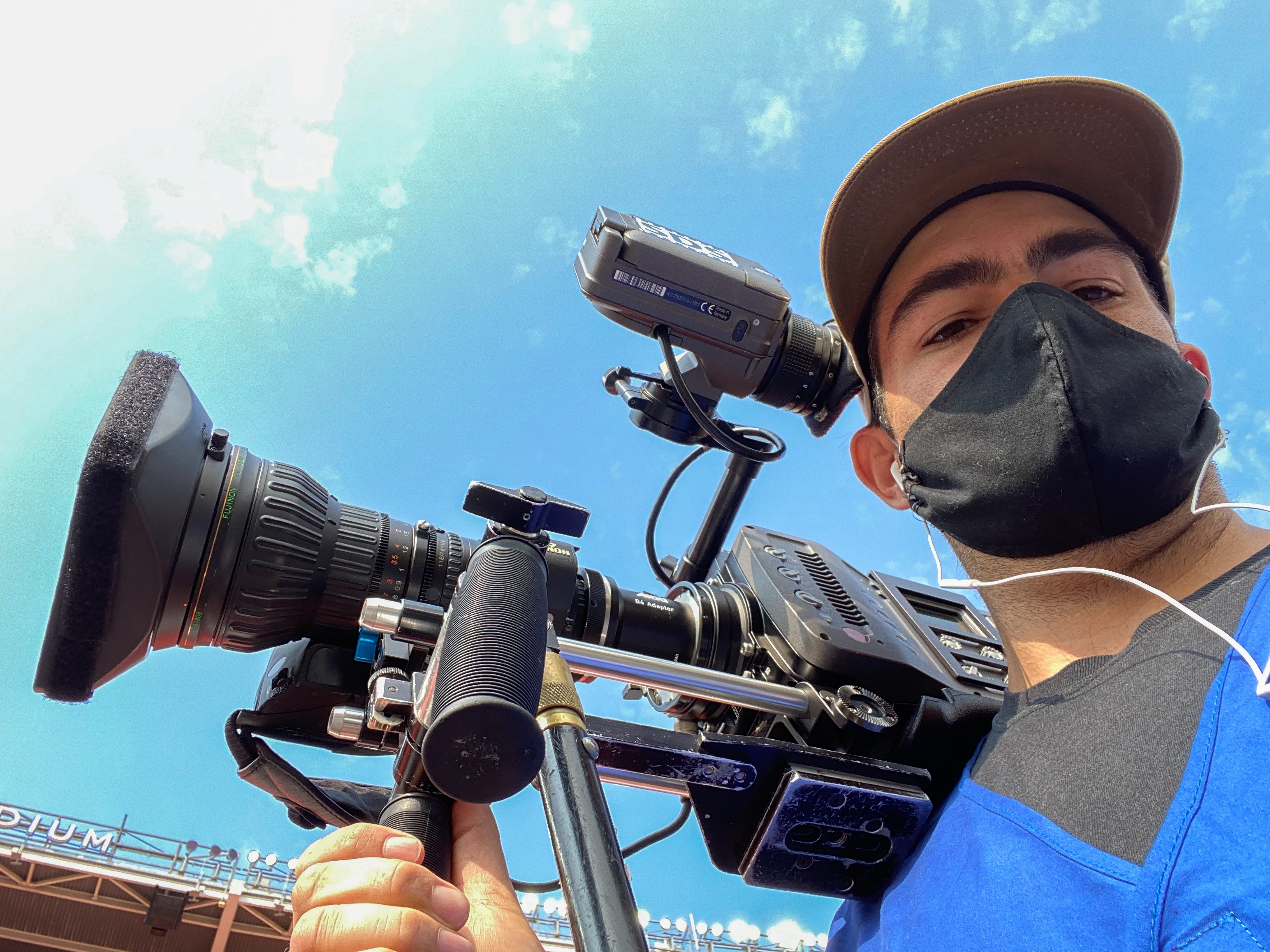 Chad Butler gets big break as a cinematographer for NFL Films

To see examples of Chad Butler’s work with NFL Films from the 2020 season, check out these clips: 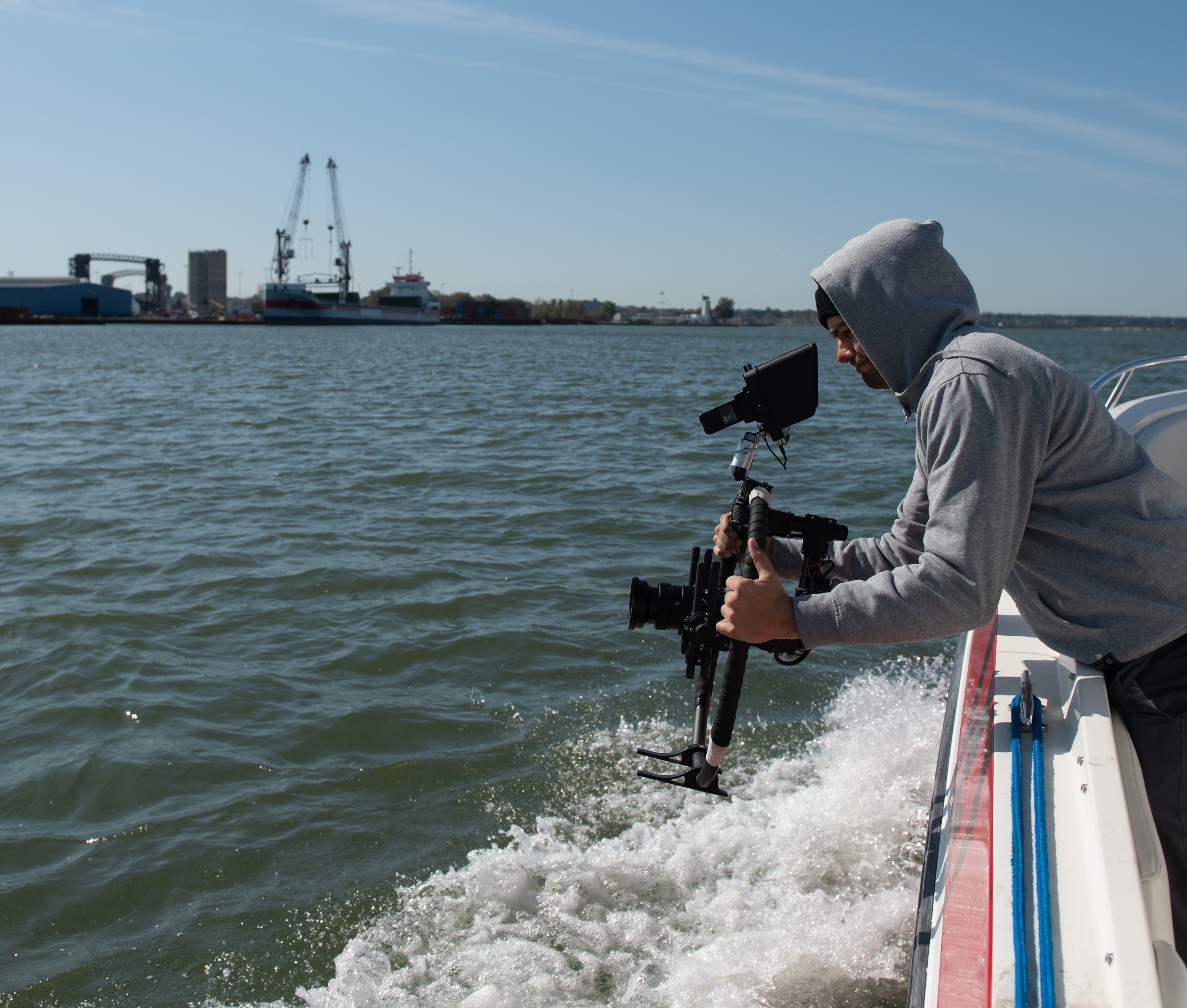 Much like the quarterbacks he films on the gridiron, Chad Butler ’18 is a dual-threat talent.

During the week, Butler is a multimedia designer for Cuyahoga County and on weekends during the NFL season he is a freelance cinematographer for NFL Films.

Both of his jobs were the result of required internships he had while earning his Bachelor of Science in visual communication technology (VCT) at Bowling Green State University.

Butler said he didn’t appreciate the value of the internship process at the time but looking back now he is thankful for the opportunities the VCT program has afforded him.

“Having to complete three internships for the degree was really important for me because if not for them I probably wouldn't have been motivated to go find the internships I would have needed to land these jobs,” he said. “I still work for two of the three internships that I did — that’s pretty amazing.”

Butler, who has worked for Cuyahoga County since 2018, started working as an assistant cameraman for NFL Films in September 2017 after completing a cinematography summer internship for NFL Films in Mount Laurel, New Jersey.

NFL Films, however, reduced its travel schedule because of COVID, forcing the cinematographers to be based in their home areas, leaving Andrich in Tampa, Florida, and Butler in Cleveland.

“Basically, they wanted to just have Steve in the southern sector of the United States,” Butler said. “They got him an assistant in Tampa Bay where he lives. I didn't get to be an assistant this year.”

Butler decided to use the down time to improve upon his craft and started filming high school football games in the Cleveland area.

Then, NFL Films asked him to be an assistant to a different crew for Cleveland’s home games. However, in a twist similar to a backup quarterback getting to start due to an injury to the starter, Butler got his chance to shine in Week 5 of the 2020 season because of the pandemic.

“They had a COVID situation with the film crew. NFL Films ended up telling me on Saturday afternoon, ‘You're going to shoot tomorrow,’” Butler said. “I was surprised because I hadn’t shot in a game before.”

His assignment for Week 5 was shooting sync sound for the Indianapolis Colts at Cleveland Browns game.

“It was a whole new experience from what I had done before,” Butler said. “You have a sound guy with you and in addition to all the game footage, you have to get a lot of audio of the players pregame and on the bench during the game.”

From there, he was a cinematographer for the rest of the season, driving to games in Ohio, Chicago and Indianapolis. Because of the NFL’s strict COVID protocols, he had to arrive at the city the game was being played in by two days before kickoff.

“It’s cool because being in Ohio it's like a three-hour drive to a bunch of different stadiums, so I am in a prime spot,” he said.

Butler didn’t grow up a fan of the Browns.

“I’m more of a fan of football because the Browns were never really good,” he said. “I would love to watch the football games that were on in prime time. I was always infatuated with the cable cameras and all that type of technology that they were using. It’s still pretty cool being from the area and seeing the Browns turn it around.”

Butler was working the sidelines when the Browns clinched a playoff berth in a win over the Pittsburgh Steelers and again a week later when they defeated the Steelers in an NFL Wild Card game at Heinz Field.

“That was their first playoff win in more than 20 years — it was pretty awesome,” he said.

He also flew to Kansas City to work the NFL Divisional Round, as the Chiefs, who play the Tampa Bay Buccaneers in Super Bowl LV, knocked out the Browns 22-17.

Each week during the season, Butler’s work can be seen on shows such as “Inside the NFL” on HBO, “The Grind” on EPIX, the NFL Network and weekly highlights from around the league. Plus, one of NFL Film’s missions is to document each season.

“If they end up making a documentary about Baker Mayfield and the Browns down the road or ESPN licenses footage for ’30 for 30’ or something like that, it will be really cool seeing my footage.”