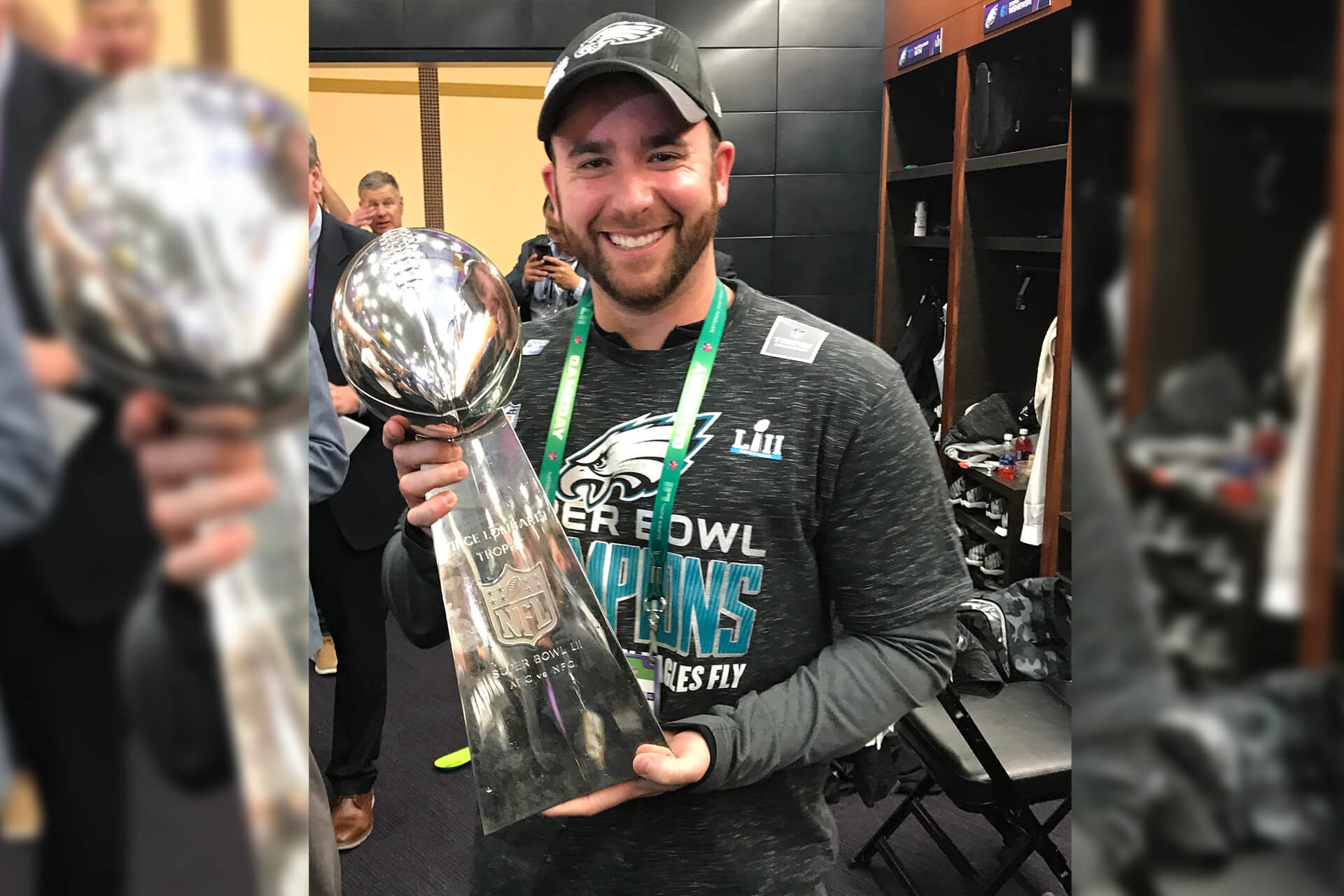 From backyard football to the Super Bowl

From an early age, football was a regular part of Ryan Maddocks’ life. His family went to Cleveland Browns and Ohio State University games. He and his brother, Cory, played football in the yard. Later, he cheered Cory on as he played for his high school team. He even got to work for the Browns while in high school.

“Football is a huge part of our family,” he said. “It was definitely engrained at a young age.”

While he never played himself – “backyard football was good enough for me” – he loved it from afar.

“Every Sunday it was always Browns football Sunday,” he said. “We were always throwing the ball in the backyard.”

So he set his sights on the NFL.

And six years after graduating from Bowling Green State University with a bachelor’s degree in telecommunications, as video assistant for the Philadelphia Eagles, the Olmsted Falls native held the Vince Lombardi Trophy.

“It was pretty cool,” Maddocks said. “I still sometimes get goose bumps thinking about it. That’s pretty much the top of the mountain right there.”

A little known fact about the trophy?

“It’s a lot lighter than people think,” he said. “People said I was holding that thing like I was seeing my first born, so tightly.”

“I look back now and just think if I had went anywhere else I’m not sure this would be possible."

Maddocks was able to share the experience with his parents and brother, who works in the video department for the San Francisco 49ers.

“A lot of emotions came to a head,” he said. “I was looking around, a little watery in the eyes, and I wasn’t even playing. We put a lot of work into getting to that moment. It was what we were shooting for.”

Maddocks said the celebration parade following the Super Bowl was surreal, and that it will all set in when he gets his ring and sees the banner in the stadium next season.

Besides a love for football, Maddocks got to this point in his life partially because of his dad’s habit of recording holidays and vacations on a camcorder.

“I always saw him with a camera in his hand,” Maddocks said, “so I was interested in cameras: manning them, making movies with friends. Getting my feet wet with the Browns at a young age made it official.”

Maddocks choose BGSU because several of his friends went there. A diehard Cleveland sports fans, he said “the icing on the cake was that [BGSU’s] colors were brown and orange.”

Once he got to campus, Maddocks’ focus was on football, interning with the Falcons.

“I treated the BG football experience as a full-time job,” he said, noting 5:30 a.m. call times. “I learned that if you really want to do this, you’re going to have to sacrifice some of your college time.”

While with the Falcons, Maddocks filmed practice and games.

“The telecomm teachers were unbelievable,” he added. “I look back now and just think if I had went anywhere else I’m not sure this would be possible. They gave us the resources to be successful. It was an atmosphere that helped you, giving you a lot of hands-on experience as opposed to just exams and tests.

“I can’t say it enough, my years at BG and then my boss at BG, Chris Zuccaro [BGSU video coordinator], helped tremendously. What it takes to get in this business, the hours and whatnot, the meticulous, perfection needed when you’re editing. I thank Chris for helping me out, giving me responsibility.”

After graduation, Maddocks completed an internship with NFL Films in New Jersey.

“It was the coolest experience that I could’ve had,” he said.

There he worked with the cinematographers to learn what they did, which back then was shot on film. He got the canisters ready and loaded the cameras.

“Nobody does that anymore, but it was so cool to experience,” he said, adding that he also helped set up lighting, a skill he learned at BGSU.

It was with NFL Films that Maddocks worked his first Super Bowl, Super Bowl XLVII in New Orleans.

“That experience was so cool,” he said. “The stuff that those guys do is incredible. I try to replicate it, but fail miserably. It is definitely an art. I soaked up everything I could.”

Going into his sixth year with the Eagles, Maddocks films practices and games, sends film to the NFL and edits film into offensive, defensive and special teams files, among other duties.

“The week flies during the season,” he said. “You want to make sure the coaches have everything they need.”

The best part of his job, besides filming the games, is the travel and visiting different cities and stadiums. He also loves game day.

“There really isn’t anything like game day, especially in Philadelphia,” he said. “You put in so much work during the week – all work is focused toward playing the game and winning – that I feel very accomplished and proud when we make sure that the team had the video they needed to study.”

This was a rollercoaster year for the Eagles. The team was excited about second-year quarterback Carson Wentz. They had solid targets at wide receiver. And their defense was good at stopping the run game. Then the injuries started.

“We lost a tackle, a running back, a linebacker, a special teams player, but we still didn’t miss a beat,” Maddocks said. “Then Carson went down.

“We were gonna roll with Nick [Foles], but we had so many doubters. And then we lost another guy. Resiliency was the best word for this team this year. It was cool to see them bounce back each week when adversity struck. We took the whole underdog thing and went. We had a group of guys playing their tails off.”

And it culminated in Super Bowl LII.

“I’d be shocked if someone in this profession isn’t thinking about getting to the Super Bowl,” Maddocks said. “That’s what everyone in the organization is shooting for. We’re all on the same team.”