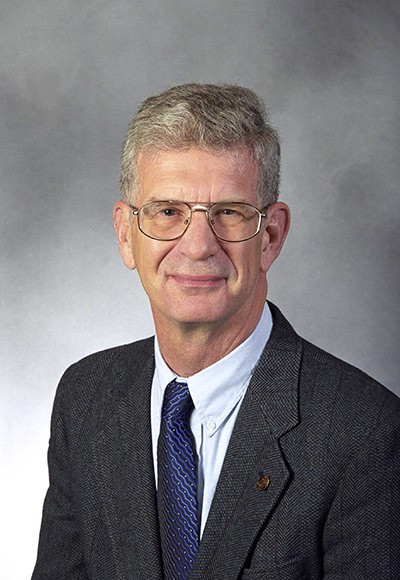 The medal presentation was initiated in 2013 by the foundation to acknowledge a lifetime body of work that embraces scholarship, leadership and mentoring in the field of naval history. The 2019 recipients were announced June 8 at the 93rd annual meeting of the foundation at the Washington Navy Yards. Along with Skaggs, Cdr. Tyrone G. Martin and Norman Polmar will receive the Knox Medal at the conclusion of the McMullen Naval History Symposium to be held at the U.S. Naval Academy Sept. 19-20.

As a BGSU faculty member from 1965-98 and award-winning local historian, Skaggs was a well-known and frequent speaker about his research into the Battle of Lake Erie during the War of 1812. He served on the nominating committee for the Society of Military History from 1986 to 1989, including a year as chair, and regularly attended and presented at conferences. His scholarship has continued in his retirement. He is also a retired colonel in the Army Reserves.

In announcing Skaggs’s selection for the Knox Medal this year, the Naval Historical Foundation wrote, “Individuals who are not themselves in academic life often ask Midwest-based naval historians: ‘Why do you write maritime history when you are so far from the oceans?’ The answer is, of course, that historians go where the jobs are. In David Skaggs’s case, he is notable for turning his Midwestern academic home at Bowling Green State University in Ohio to brilliant advantage by focusing on the War of 1812 era on the lakes frontier with Canada. He brought to his writing the experience and insights he gained as a serving officer in the United States Army.”

Notable publications among Skaggs’s 13 books include his co-editing with William Jeffrey Welsh of “War on the Great Lakes: Essays Commemorating the 175th Anniversary of the Battle of Lake Erie,” in 1991. Skaggs “continued to deepen his knowledge and insights into the battle as he worked toward his masterful narrative and analysis” coauthoring with Gerard T. Altoff “A Signal Victory: The Lake Erie Campaign, 1812-1813,” published in 1997. Altoff was chief park ranger and historian for the National Park Service at the Lake Erie islands associated with Perry’s 1813 victory over the British squadron. Skaggs then turned his attention to Lake Champlain for his 2003 biography, “Thomas Macdonough: Master of Command in the Early U. S. Navy,” in which he interpreted Macdonough’s career in the light of present-day theories of military leadership and command. In 2006, he produced “Oliver Hazard Perry: Honor, Courage, and Patriotism in the Early U. S. Navy.” The book, the first on Perry in 25 years, brought renewed attention to the U.S. Navy commander who coined the phrase “We have met the enemy and they are ours.” The book won first place in the academic scholar division of the Local History Publication Awards, presented by the Center for Archival Collections at BGSU.

“All three of these books are characterized by eminent readability and impeccable scholarship,” the foundation said.

In 2012, Skaggs received the Samuel Eliot Morison Award, presented by the USS Constitution Museum in Boston.

Skaggs and co-editor Dr. Larry Nelson, former history faculty member at BGSU Firelands, also won a Local History Award for their book, “The Sixty Years’ War for the Great Lakes, 1754-1814,” published in 2001 by Michigan State University Press. It was praised for its completeness in addressing the military, economic, political and cultural issues among the four groups who vied for control of the Great Lakes at the time—the British, French, Americans and Native Americans.