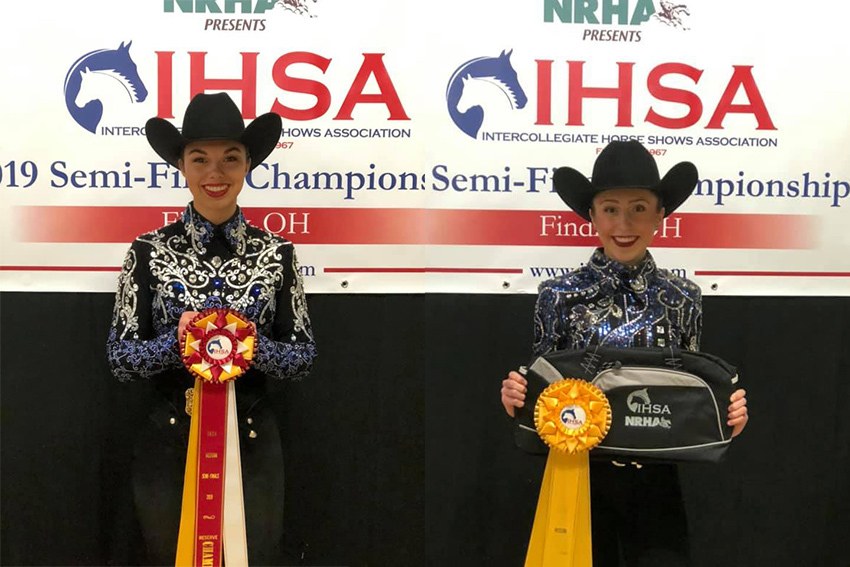 Rylee Aurand of Arcadia, Ohio, started riding horses as an eighth grader. Even though she knew when she enrolled at Bowling Green State University that she wanted to join the University’s equestrian team, competing at a recent national championship show was an honor.

Along with Gabrielle Miller, Aurand was one of two University student-athletes to compete at the Intercollegiate Horse Show Association national championships in Syracuse, New York. IHSA welcomes college and university equestrians from across the United States, including all eight Ivy League schools.

Both student-athletes qualified first through their IHSA zone, which includes more than 25 schools in Ohio, as well as many more colleges and universities throughout Michigan, Indiana and parts of Kentucky and Ontario, Canada.

“Within our zone, University of Findlay is very competitive,” Aurand said, “which made it extra nice that BGSU earned two spots to compete at nationals.”

Aurand’s event, or class, required her to perform “on the rail” — around the inside of the show ring — at the walk, trot and canter. She and other competitors also rode individual patterns, or specific sets of instructions completed “off the rail,” to showcase their skills.

These classes and requirements are common at horse shows throughout the country. What sets IHSA apart is that each rider competes on a horse he or she has never met, with almost no time to get to know the horse beforehand. The horses at each competition are provided by the hosting college or university, and riders are assigned to their horses just before they enter the show ring to compete.

“Each horse is so different,” said Aurand, who is a marketing major and the daughter of Jeff Aurand and Karen Moses. "You don’t know if your horse might be lazy or hard to ‘move out.’ You don’t know what cues that horse is familiar with. You just go in and do your best.”

Although this makes competition tougher, Aurand said she appreciated the opportunity to be judged on her riding skills at a national level.

“Good judges are able to tell the difference between a rider who has an ‘easy’ horse and a rider who might be doing everything right but the horse just isn’t cooperating,” she said.

Two equestrian teams are available to BGSU students: one for western riders like Aurand, and one for English riders. The equestrian team is open to students of all skill levels, including those who have never ridden but always wanted to try it. Owning a horse is not a requirement to join, and riders are not expected to buy or lease a horse after joining.

The team does demand a big time commitment, though, which Aurand said was one of her challenges even as a second-year team member.

”The western team has weekly meetings and weekly lessons at our coach’s stable, Katie Morehead of KM Performance Horses.  So that’s two drives to Findlay every week. But knowing that the team meetings and lessons would be at the same place and time helped me schedule my classes around it.”

Time management is just one of the life lessons Aurand said she has gained through the University’s equestrian team. Another is the “belonging” sense of being on the team; competing with a horse means accounting for yourself and someone else — just as, in the marketing world, she would account for herself as well as her department or colleagues.

Aurand also had a couple tips for prospective team members.

No matter what happens in the show ring, Aurand said, “you can’t get upset — and that’s my other piece of advice. Even though things can be frustrating sometimes, remember to have fun.”