Jacob Smith has had some powerful mentors in his life, beginning with his own family, and has found learning opportunities in some of the most unexpected places. They have taught him about service, human rights, democracy, the value of education and the importance of knowing how to learn. 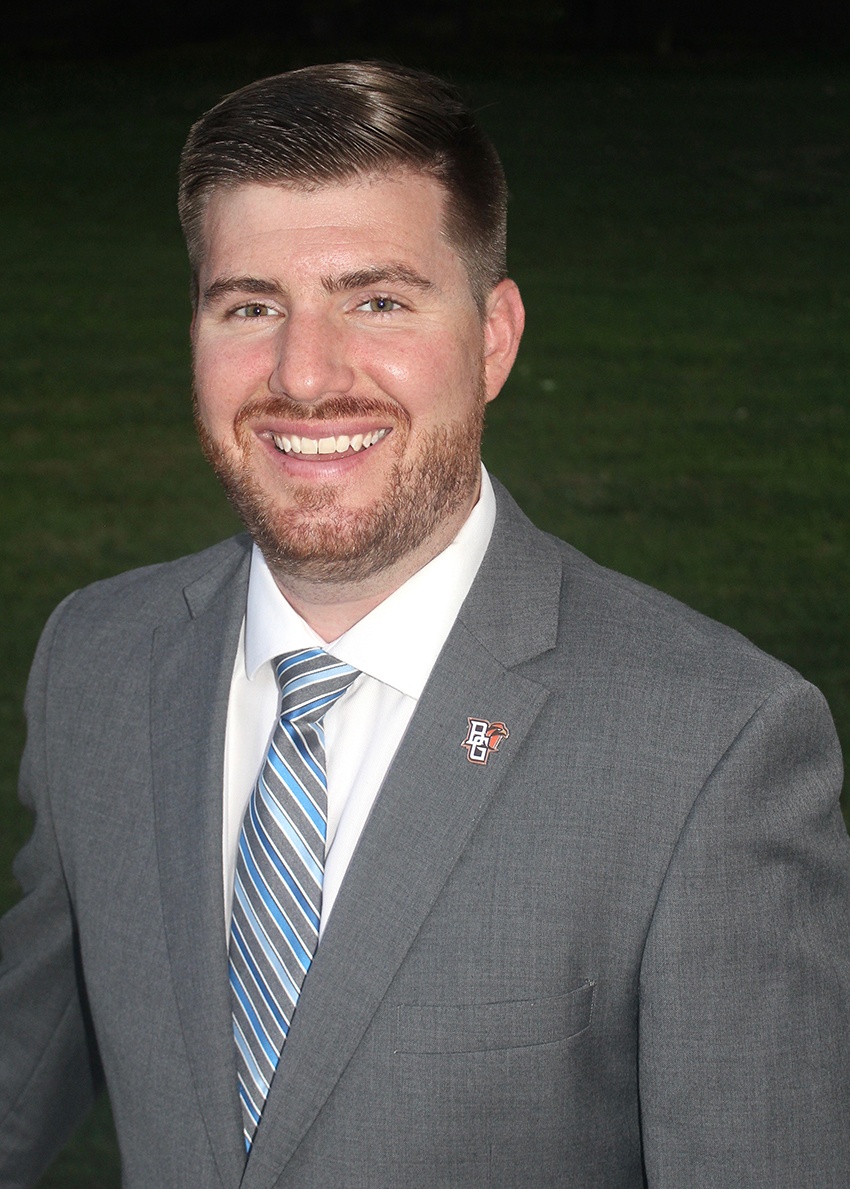 Today, Smith brings those lessons to his own life and his work as a congressional staff assistant for U.S. Rep. Marcy Kaptur (D., Toledo). Based in North Royalton, near Cleveland, he deals mainly with veteran services, but also handles military, IRS and postal service casework.

Smith will share his experiences and values with students as the speaker for BGSU Firelands May 18.

His educational path took a detour when, following in the footsteps of generations of his family, he joined the Army after graduating from Perkins High School in Sandusky, Ohio, in 2000. He served in the U.S. Army from 2000-04 as a field artilleryman, with 4/27 Field Artillery battalion as a sergeant in the 1st Armored Division.

“I got a fully expense-paid trip to Baghdad, Iraq, and they even paid me to be there,” he said wryly. “I was in a program called JROTC in high school where I had some really good instructors and decided I wanted to join the military. It’s something I’m very proud of. I knew what I was doing, I raised my hand, and I would do it again.”

He was also fortunate to be assigned as the driver at one point to the battalion commander, Lt. Col. Jose Robles. Being a driver entails a lot of waiting while your passenger is in meetings, but for Smith this proved to be a fruitful time.

“The commander would give me books on leadership to read,” Smith said. “LTC Robles had been at West Point and he would share with me the books he read about the challenges of leadership and looking at decisions that leaders of the past had made. He would ask me about what I had read and how I evaluated it.”

Another Army leader who had a large impact on Smith was Command Sgt. Maj. Robert Kelly. It was through Kelly that Smith learned more about directly leading soldiers and what it takes to be a noncommissioned officer.

Today, Smith serves as a trustee with the Honor Flight Cleveland board, which flies veterans to Washington, D.C., seven times a year to see their memorials.

Though he went directly from high school to the military, he always knew that he needed to further his education.

“The idea of the importance of education in the world cannot be overstated,” he said. “I firmly believe that while the military is important to guaranteeing freedom for citizens, you need to have educated citizenry. This isn’t a new idea, but it’s still an important one. Ignorance is a danger for us; citizens cannot truly consent to something they can’t understand.”

His deep-rooted belief in the right to an education goes back to his grandmother, a schoolteacher in the 1930s in downstate West Virginia who defied the status quo by enrolling black students, at the real risk of losing her job. Feigning ignorance of an unwritten policy, she accepted the children of African American families who moved into the district during the summer to sign their children up for school, and, in an ironic turn of events, wound up elected as PTA chair when white families then stayed away from the first meeting — which made it impossible for the school board to fire her.

“So she de facto integrated the schools,” Smith said. “Many years later when I asked her why she would risk her livelihood to do that, she looked me in the eye and said, ‘Jacob, every single person has a right to an education.’ So I figured if my grandmother had the guts to lose her only source of employment, I should stand up for education. Funding for higher education has decreased (when adjusted for inflation) in many states over the past 10 years and is really under threat today.”

After leaving the Army in December 2004, he enrolled at BGSU Firelands in January 2005, earning an associate of arts degree. Especially impactful for Smith there were history professor Dr. Michael Kimaid, whose work explores the interface of history and geography; and sociology faculty member Dr. Timothy Jurkovac, whose research and publications include studies of political campaigning and communication strategies. Both helped nurture and shape Smith’s interest in service and political life. History faculty Dr. Larry Nelson, a noted expert on Ohio history, was another important person in his intellectual development.

But perhaps most important, “It was at Firelands that I really learned to read critically. It is a skill that continues to prove important in my job today and no doubt will continue to throughout my life.”

In addition to academia, Smith found that opportunities for learning and service sometimes come from the most unexpected sources.

“While I was at Firelands, I loved walking around McBride Arboretum, and I often saw an older woman working there. I didn’t know who she was, but she was almost always there,” he said. “Later, when they needed a student board member she suggested that I become a part of the board. It turned out she was Margaret McBride, the widow of James McBride, the first dean of Firelands, and after whom the arboretum is named. So now I’ve been on the board since 2007.”

Smith also serves on the arboretum board with his former high school science teacher and fellow BGSU alumnus John Blakeman.

Smith is proud of all the improvements the board has accomplished, with trees continually planted, new pathways built, a new restroom, a pathway lined with celebration maples. The James McBride Arboretum has evolved into a truly beautiful place that is not only enjoyed by students but also by many people in the community, he said.

In addition to his service as a board member of the arboretum, Smith remains active with BGSU Firelands as a member of the Leadership Council. He is also the first student to teach ElderCollege classes there, on such topics as the intersection of religion and politics, the history of Johnson’s Island in Sandusky Bay as a Civil War prisoner-of-war camp, and the stages of presidents’ use of media and communication.

After graduating from BGSU Firelands, Smith continued on to the Bowling Green campus in fall 2007, where he met his future wife, Lauren (Consolo) Smith '08 (BFA). The couple married in 2011 and began a Falcon family. While some Falcons like to claim to bleed orange and brown, “We produce it,” Smith said. “Our daughter, Emily, has brown hair and our son, Ryan, has orange hair.”

At BGSU, Smith double majored in history and political science. Former political science faculty member Dr. Jeffrey Peake, a veteran himself, “really got me interested in how the federal government operates, which has proved very helpful in my current job.”

However, it was Dr. David Jackson who he was a teaching assistant for during graduate school “who probably had the single largest impact on me at main campus. I felt like I connected with him and I learned a lot from him. He’s very knowledgeable in many areas and I am glad to see that he was just recognized with the Professorship of Service Excellence Award. His interest in Poland worked out well for me in interacting with Congresswoman Kaptur, because she co-chairs the Congressional Caucus on Poland.”

After graduating with a bachelor’s degree in political science in 2009, and already thinking he wanted to go into public service, Smith returned to BGSU for his Master of Public Administration.

“I really enjoyed it,” he said. The MPA program later asked Smith to come back and sit on the MPA Advisory Board to help with the program’s certification process. Achieving certification was extremely important since it is often a requirement for job applicants to have graduated from a certified program, Smith said. “I was happy to help out with that.”

“Marcy is well represented with Falcons,” Smith said, and even though Bowling Green itself is no longer in her district, Firelands is, and she remains deeply committed to the University.

Smith is dedicated to finding ways to better serve the community, helping people and creating a world where his two children “can obtain a good education that gives them the ability to provide for themselves but also the ability to become true citizens of the country and the world.”