Student researchers honored for their work on diversity issues 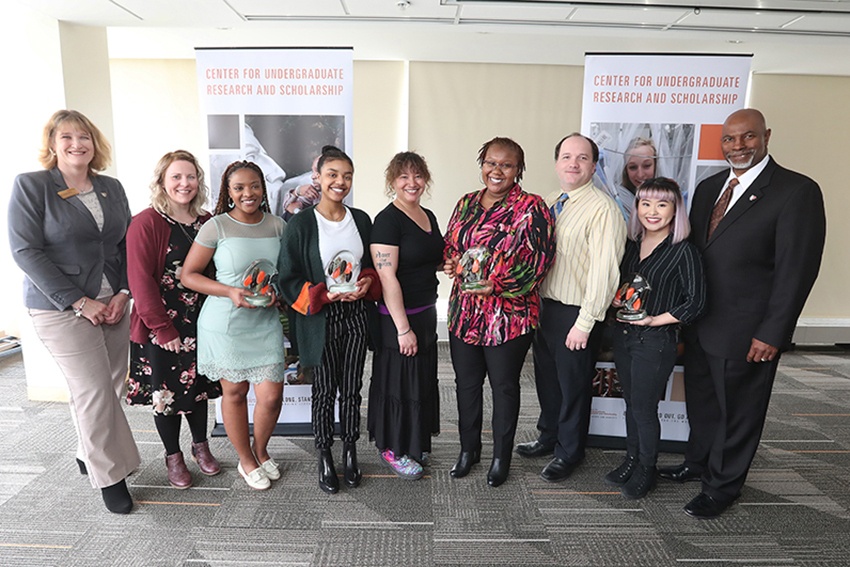 “We are at an important time in our evolution as a nation,” Provost Joe Whitehead told those gathered for the presentation of awards from the 2019 Undergraduate Symposium on Diversity: Opportunities and Challenges for the Inclusion of Diversity in Higher Education and Society. “Division is sowed from lack of knowledge.”

The research projects undertaken by student participants in the annual symposium advanced knowledge and understanding of a number of topics related to diversity. Working with faculty mentors on either class or individual projects, their work aimed to break barriers and promote understanding.

The winners of the symposium were honored April 10 at a ceremony hosted by the Center for Undergraduate Research and Scholarship (CURS), which organizes the symposium and provides support for students to engage in hands-on learning activities.

“I am every year thoroughly impressed by the quality of the projects presented by these students on a wide range of topics related to diversity, and this year was no exception,” said Dr. Cordula Mora, CURS director. “I have no doubt in my mind that these students will make a difference in the lives of others and leave our society a better place than they found it.”

Euseary conducted a study of “Media Representation of Emmett Till in the 20th Century,” in which she analyzed newspaper and magazine articles on the infamous murder of the young black man, looking at how the use of language and the stances taken by the writers influenced people’s interpretation of the case. With support from CURS, she has now taken the study a step further by talking to students and parents today to gauge the impact 50 years later, said her mentor, Dr. Thomas Edge, ethnic studies. “It’s an ambitious project,” he said.

Fields conducted an original study on “Parental Dietary Intake and Mealtime Feeding Behaviors Associated with Autism Spectrum Disorder.” Working with her dietetics faculty mentor, Dr. Kerri Knippen, Fields looked at whether living with a child with the disorder has the potential to affect parental or caregiver dietary intake. Hers was the first study to focus on parents’ diet, Knippen said, and has led to a partnership with a Michigan autism organization. Although it was challenging, Fields “persevered and really had a passion for this project,” Knippen said.

For her Women’s Studies class, Fitzpatrick created a poster based on her research into the beginnings of the “me.too” movement, presenting statistical data, current events and the positive changes that have arisen from the movement’s impact. Her mentor, ethnic studies faculty Dr. Jessica Birch, said Fitzpatrick combined elements of social justice, social work, gender and race but also looked at “what we need to do.”

McKinley’s poster for her class on “Women of Color in the U.S.” was titled “Asian Women: People, Not Props,” an examination of how deep stereotypes of Asian women persist in popular culture despite the increasing diversity of American society and the large numbers of Asian American women. Frequently objectified as sexual objects, Asian women tend to be portrayed as either the “submissive lotus flower” or the “evil dragon lady,” McKinley found, tracing the roots of these stereotypes to wars between the U.S. and Asia, white supremacy and the colonialist notion of the white savior. She offered suggestions for solutions to the issue.

Birch praised McKinley’s dedication to social activism and the change her presence on campus makes.

“You are not only our future leaders, you are leaders now, and we need you!” Whitehead told the students, congratulating them for choosing to do their projects instead of taking it easy. He called for greater awareness and overcoming misunderstandings that allow people to look down upon others. “What’s essential is inclusion,” he said, noting that “we all want what’s good — a good life, a good home, a way to make a living. We have to stand together.”