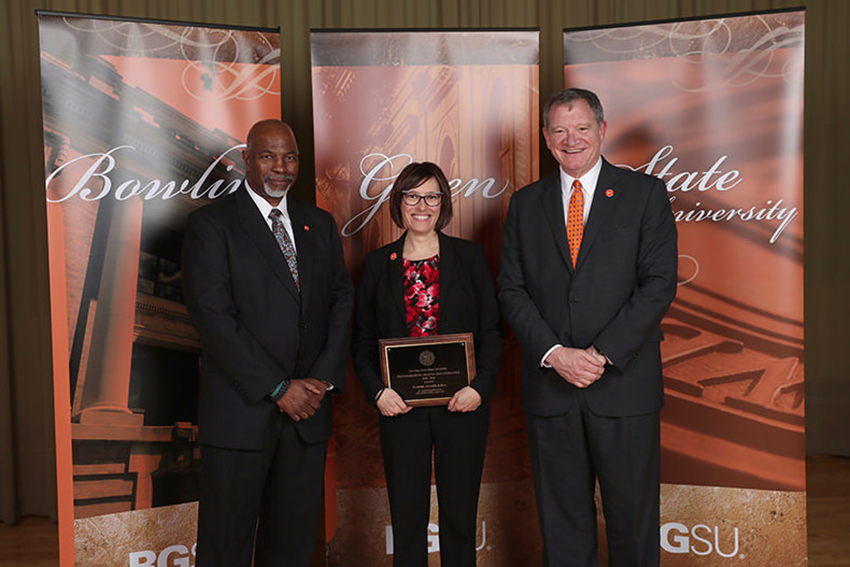 In her 19 years on the faculty of the College of Musical Arts at Bowling Green State University, Dr. Elainie Lillios has regularly been in the news for her accomplishments and the awards and honors they have brought her. A professor of composition, she is a leading figure in the world of electro-acoustic music, continually exploring new technologies for creativity and performance.

On April 16, BGSU named her a professor of creative arts excellence, a title conferred upon members of the faculty who hold the rank of professor and who have established outstanding national and international recognition through creative or artistic achievement in their disciplines. The title is conferred for a period of three years and includes an annual stipend of $5,000 — a $3,000 salary stipend and $2,000 for professional development. It was presented at the annual Faculty Excellence Awards.

Lillios is active not only in writing immersive sonic pieces, she is also a frequent performer and regular participant in national and international concerts and festivals and is sought after as a guest artist and lecturer and in residencies and master classes, carrying the BGSU name and reputation as a center of new music far and wide.

As a composer, Lillios has been awarded several of the most selective and highly regarded national awards in her field: the Barlow Endowment Commission from Brigham Young University and the Fromm Foundation Commission from Harvard University. In 2017, she was a finalist for the Rome Prize, one of the most competitive international awards, and in 2018 was nominated for a Grammy Award for Best Contemporary Composer for her flute trio “Summer Sketches.”

At last year’s Faculty Excellence ceremony, she was presented the Olscamp Research Award.

Lillios maintains a fast pace of work. In addition to her Fromm Commission, her current projects include a new work for percussionist Scott Deal dedicated to BGSU’s late percussion professor Roger Schupp, a work for alto flute commissioned by renowned flutist Eva Ansler of Florida State University, and the recent premiere of her viola and electronics piece “Liquid | Crystal | Vapor,” which premiered last month in San Francisco and then was also performed in Berkeley and Davis, California.

As an educator, she enhances her students’ learning by bringing to campus innovative performers with whom she collaborates, such as the SPLICE Ensemble, a trumpet, piano and percussion trio for whom she has been commissioned by the Fromm Music Foundation to compose a piece. Lillios was one of 14 composers nationally to receive the highly competitive award in 2018.

“She was the first-prize winner of the 36th annual Concours Internationale de Bourges for her composition ‘Veiled Resonance,’” Mathis said, “and her music is heard on 21 separate commercial CD recordings since 2000 on some of the industry’s most notable labels.”

“These are remarkable achievements and constitute a stellar record of peer review in her field.”

In 2012, she became only the second American composer in the history of the prestigious Groupe de Recherches Musicales musical research group in Paris to be awarded a commission. Her work was premiered as a featured piece on the group’s “Multiphonies” concert series, and she performed it at La maison de Radio France in the Salle Olivier Messiaen, on the organization’s famous “Acousmonium,” an orchestra of 80-plus loudspeakers arranged throughout the concert space.

As a member of the SPLICE Institute, she was part of bringing to campus last fall the SPLICE Festival 2, a gathering of more than 50 nationally recognized and emerging composers, performers and composer-performers featuring virtuosic, engaging live performances combined with new technologies. BGSU students were able to attend a weekend of concerts, presentations and workshops designed to inspire, educate and share information about composing and performing using technology.

Through her national and international connections, Lillios has helped bring other contemporary performers to BGSU to learn from and with faculty and students here. These include the Bent Frequency Duo, for whom she composed “Hazy Moonlight” for her Barlow Commission, and accordionist Panagiotis Andreoglou, whom she met during her 2014 Fulbright stay at the Municipal Conservatory in Thessaloniki, Greece, and who then came to BGSU as a 2017 Fulbright Fellow.

She describes herself as “passionate about helping students realize their creative, technical and professional potential.” She believes “every sound can be musical and serve as a compositional element.” Likewise, she expands her students’ concept of what the term “music” means and encourages them to be more broadly creative in applying techniques and ideas.

She recruits and mentors composition students at BGSU as well as teaching in the Summer Institute for the Performance, Listening, Interpretation and Composition of Electroacoustic Music in Kalamazoo, Michigan. Her students have gone on to top doctoral programs and many are now active professionals.