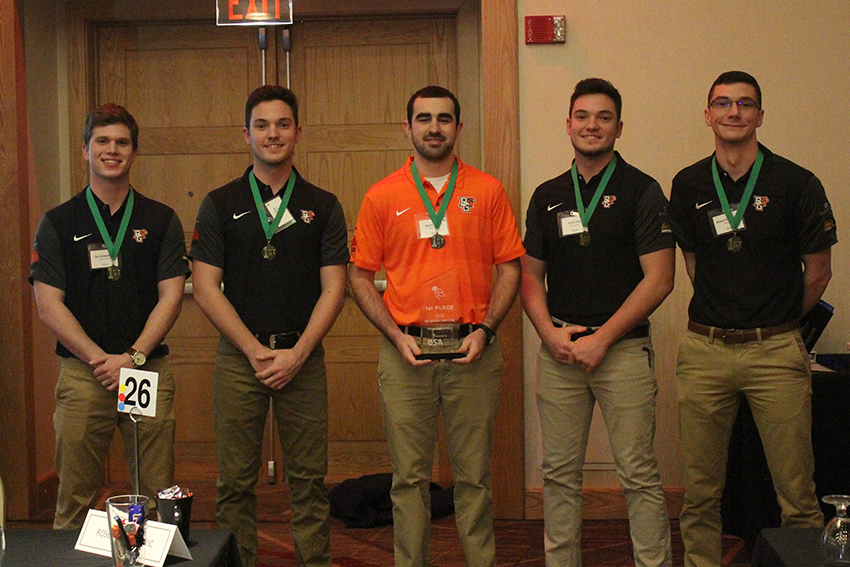 Construction management students in the College of Technology, Architecture and Applied Engineering at Bowling Green State University took first place in their division at the New Builder’s Competition, developing a project plan that surpassed teams from three other Ohio universities.

Hosted by the University of Cincinnati, the annual New Builder’s Competition is a project-based competition for first-through third-year students from universities across Ohio. Students compete in teams of five to develop a project plan for a proposed construction task.

Responding to the demands of the project, students compete in one of three categories: heavy civil, residential or commercial. Dan Bowerman, Kevin Pae, Kyle Pae, Blake Rothschuh and Quinn Smith, all sophomores majoring in construction management, participated in the heavy civil category.

This category of construction focuses on large-scale infrastructure such as highways, bridges and sewers that impact municipalities. In developing the project plan, students work with faculty advisors and industry partners to exercise skill sets ranging from designing and safety planning, to budgeting and time management. 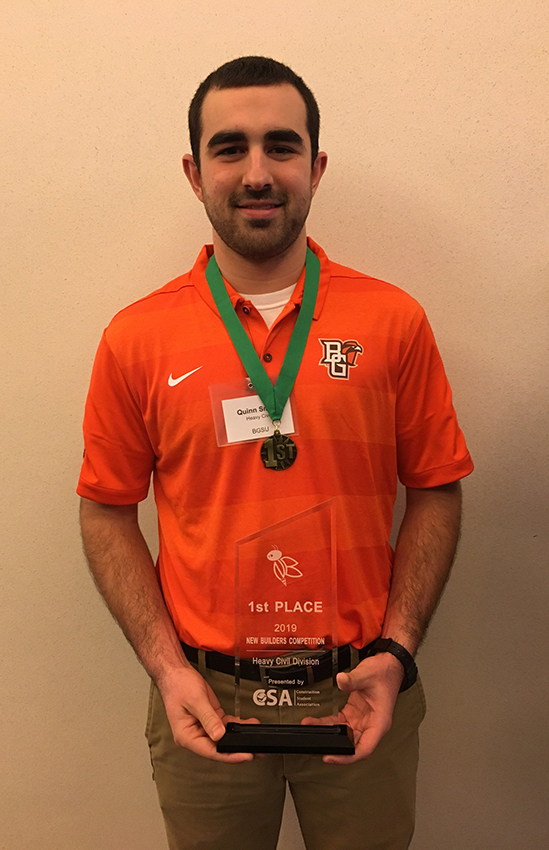 But the competition is more than just an afternoon at a conference. Teams spent weeks prior to the event developing proposals and dividing up responsibilities.

“We spent hours and hours trying to perfect our proposal,” Bowerman said.

For the purposes of the competition, teams were given a set of plans from an actual Ohio Department of Transportation (ODOT) project in Cincinnati and a fictitious company to embody. The BGSU team was given “Great Miami Asphalt Co.” with a task of widening a highway ramp. The team had to develop their proposal around the abilities and skills of this pretend company.

The students then developed and submitted resumes, divided the proposal into sections and worked together to solidify a proposal. At the competition, the teams presented their proposals to a panel of judges as if they were the construction companies bidding on a job, giving the students a taste of the true demands they will face when they enter the workforce.

“I feel as if we did a wonderful job stepping away from being BGSU students and really working the idea that we were ‘Great Miami Asphalt Co.,’” said Kevin Pae, who fulfilled the role of project management.

In embodying this company, students reached out to numerous industry professionals for advice developing schedules, delivering a project plan and executing a successful bid.

Not only did BGSU students gain valuable knowledge and expertise by participating in the competition, but some students such as Smith already have been afforded further professional development opportunities in the form of internships and co-ops.

“I hope this early success will carry over into future projects,” Smith said.

Scott Gross, instructor in the construction management program, organized the BGSU team along with support from Joe Lavalette, lecturer in construction management, who accompanied the students to Cincinnati and provided pointers for their presentation. Morgan Montgomery ’11, estimator and project manager at Vernon Nagle Co., organized various industry individuals to help provide weekly training sessions for the students regarding highway construction.

Gross helped connect the students with the opportunity and encouraged them to compete. By giving advice on successful project bidding and project planning, he helped paved the way for the team to achieve their first-place position.

“Overall, these competitions provide a glimpse into what it actually takes for a company to prepare a project proposal for an owner,” Gross said. “It is an incredibly valuable lesson for the participating students and they did a great job.”

He did not have to try hard to convince the students to compete, as most of the team expressed their interest in competing stemmed from an early interest in construction management, or from being raised in a “do it yourself” type of household. One student, however, explains that his participation was by chance.

“A good friend actually volunteered me to participate in the competition,” said Kyle Pae, who took on the role of site logistics and quality control for the project. “I’m glad he did, because this competition taught me a lot about the field and has given me hands-on experience you can’t always get in the classroom.”

While winning the competition does provide a sense of pride and accomplishment for the team, Rothschuh said, as a future leader, winning “cannot be your main motivation. Your heart and mind have to be in something to really appreciate the experience, no matter the outcome.”