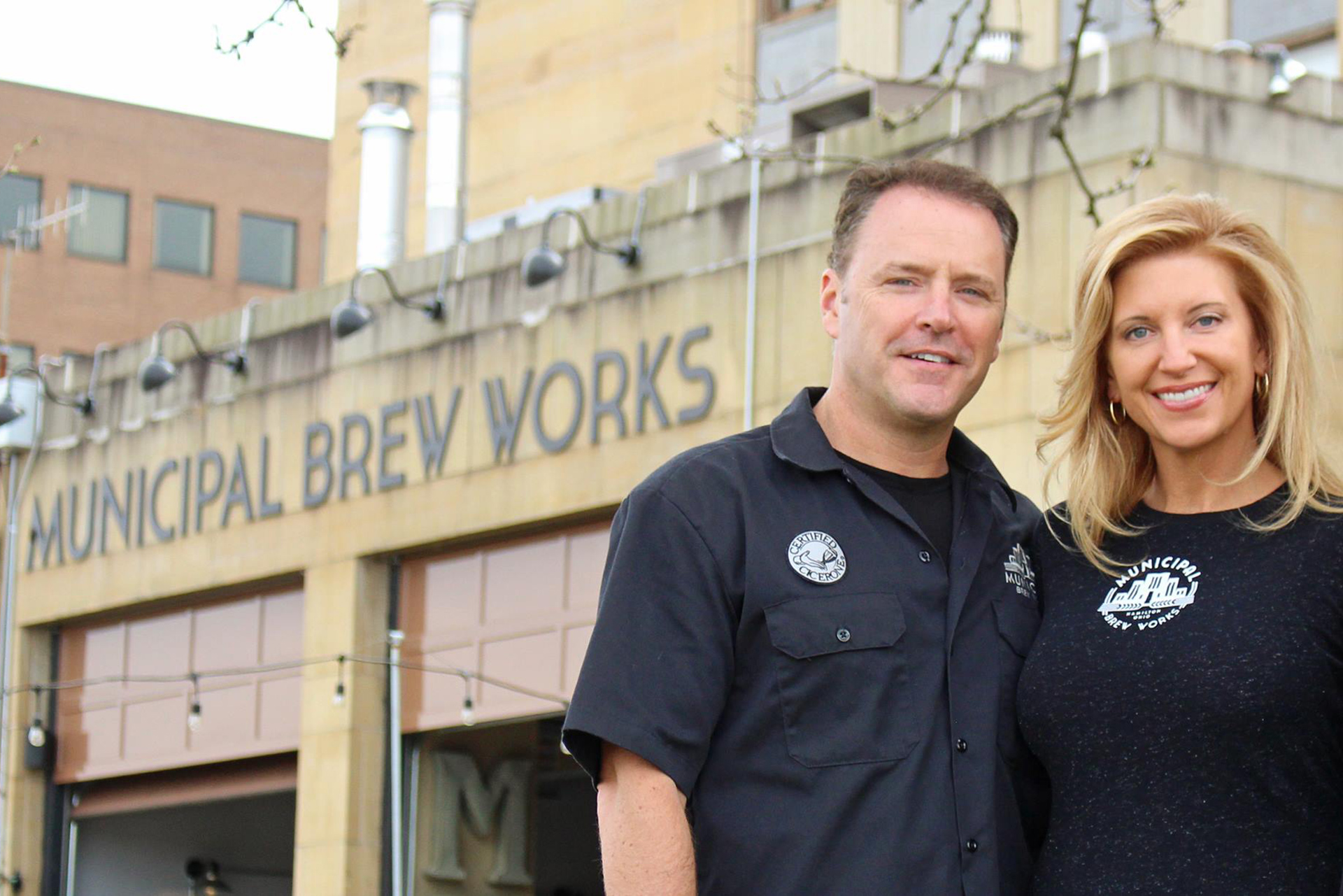 It’s Valentine’s Day, and that means it’s time to share flowers, chocolate or beer with your loved ones. Wait a second, beer?

In many cases, yes, but especially one that involves two pairs of Falcon Flames running a craft brewery in Hamilton, Ohio, near Cincinnati.

Bowling Green State University alumni Jim ’94 and Laura (Jackson) Goodman ’93 and Aaron ’93 and Stefanie (Axe) Holtz ’93 are part of an ownership that opened Municipal Brew Works in downtown Hamilton in June 2016. Their affection for craft beer, which actually started right after graduating from BGSU, has blossomed well beyond their dreams.

The couples have remained good friends since their days at the University. Jim was a sport management major with an emphasis in marketing and Laura majored in biological sciences with a marine biology specialization. Aaron graduated with a history degree and Stefanie earned a music education degree.

“We hung out together because Jim and Aaron had met in the fraternity, and that’s what started our friendship,” Laura said. “We were at the party when Aaron and Stef got engaged.”

“Aaron and I were fraternity brothers in Lambda Chi Alpha,” Jim said. “He started homebrewing in the mid-’90s, and after I tasted one of his home brews, it got me interested in homebrewing as well. After we graduated, we went on bus trips to various breweries with some other fraternity brothers and we thought this is something we might be able to do someday if an opportunity ever came up.”

That opportunity came several years later in the form of the historic Fredrick Mueller building, which was built in 1933. The City of Hamilton’s municipal building (and namesake of the brewery), it housed Fire Station No. 2 until it moved in the 1990s.

Their love affair with craft beer would live on. 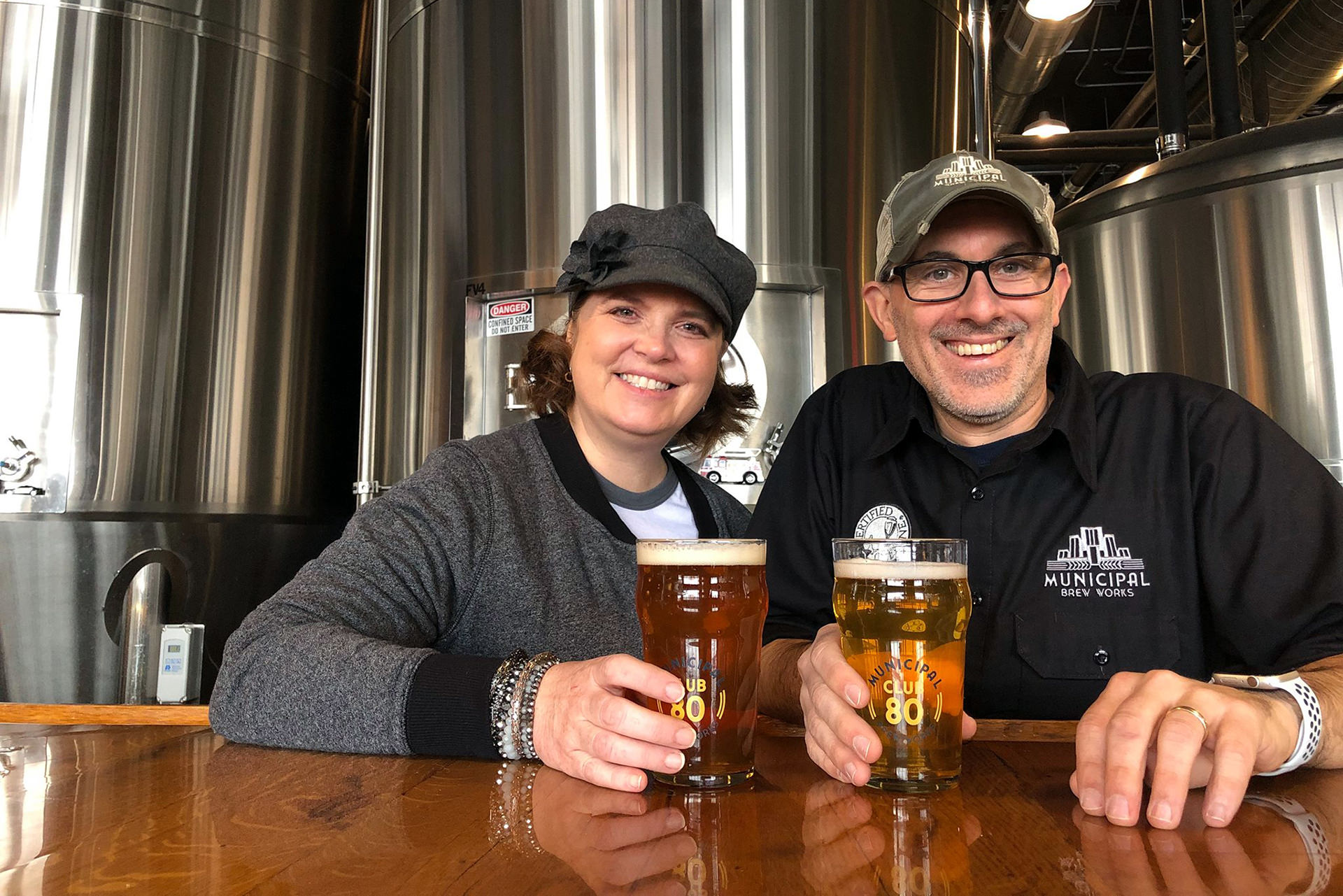 “It was a joint dream, so we had talked with Laura and Jim about seeing a lot of microbreweries popping up and how cool it would be to have one of our own,” Stefanie said.

“Aaron and I had weighed all of the options and with Hamilton going through such a revitalization, we thought this was the place to be,” Jim said. “In his State of the City address last month, the city manager said that five years ago the main thoroughfare, High Street, was at 2 percent occupancy and now it’s 100 percent storefront occupancy. It’s been really cool to be a part of that and to see all of the businesses pop up since we’ve opened.”

The Holtzes got married in 1995, and the Goodmans followed in 1997, and their enthusiasm for craft beer has been a part of their lives the whole time.

“I mean look how long we have been patronizing the craft beer industry,” Laura said. “We were traveling around to breweries forever. We would make vacations out of it, so we’ve been drinking craft beer since we graduated from BGSU basically.”

Added Stefanie: “The very first Christmas that we were married was when I bought Aaron his Mr. Beer kit and he started homebrewing.”

Aaron soon shared the fruits of his brewing skills with Jim back at BGSU.

“I remember being at an alumni golf outing with Aaron and he brought one of his beers, a porter,” Jim said. “After I drank it, I knew I had to try it too. I told Laura about it, and, sure enough, I got the Mr. Beer kit.”

“That’s our flagship beer,” Jim said. “In the summertime, we’ll infuse it with orange zest and a little agave nectar and that quickly becomes our top seller because it’s such a thirst-quenching beer.

“Aaron’s porter, Midnight Cut, also is another really good one that we sell a lot of in the colder months. It’s also the base beer for our True West Coffee Porter.”

The alumni said the brewery is looking to expand soon.

“We really need to look at our options to increase production and handle the bigger crowds that we have,” Jim said. “During the cooler months when the garage doors are down, we don’t have access to our courtyard, so our space is a little challenging in regards to the crowds we get.”

“It was a great event,” Aaron said. “It was nice to talk to the other two breweries there, one of which was a young startup and only had been open a few months at the time. And I didn’t previously know the guys from Phoenix. It was a great setup to mingle with fellow alumni.”

The brewery also strengthens its ties with the community by creating activities for public good such as an event called Ales for Tails, which supports the Humane Society.

Another popular annual event honors the memory of fallen Hamilton firefighter Patrick Wolterman, who died in 2015.

“One of the special things we do is brew a special beer at the event honoring him and use the raised funds for a charity of the family’s choosing,” Jim said. “It’s a watermelon infusion of our Approachable Blonde. We call the beer Woltermelon Ale in his honor.”