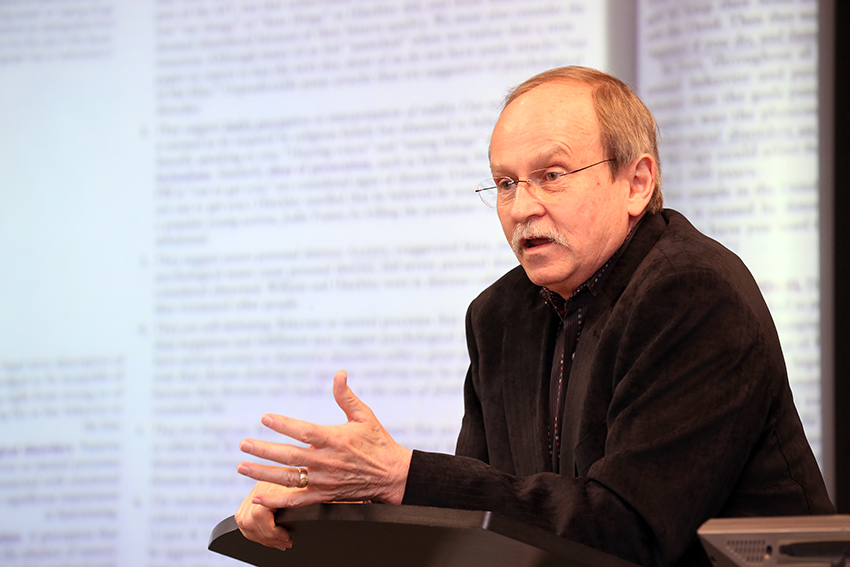 Dr. Christopher Mruk, professor of teaching excellence at Bowling Green State University and faculty member at BGSU Firelands College, is well-known in academic circles for his scholarship in the areas of positive psychology, humanistic psychology and authentic self-esteem. Now Mruk has branched out into new formats to share the concepts he has researched and written about over his career with general audiences as well as practitioners.

Mruk said he is enjoying the refreshing challenge of writing the blog posts, which are much shorter and condense ideas into simpler terms.

“I like being able to apply my scholarly work to everyday life,” he said. “The writing is more exciting while being useful. The posts do include some references to academic works but there’s less attention to presenting the research the ideas are founded on and more attention on conveying them to a lay audience in clear, concise ways.”

Mruk, who is also on the BGSU graduate faculty, has written three books on the topics of self-esteem and positive psychology, one of which is in its fourth edition. A fellow of the American Psychological Association, he is an associate editor of the association’s journal The Humanistic Psychologist.

In recognition of his reputation in his field, Oxford University Press turned to Mruk to produce a book on positive psychology that, although definitely not in the self-help category, could be used by mental health professionals of all types and their clients but also by a general audience. Mruk called upon his 30 years of research into self-esteem and positive psychology to see where they overlap, reframed the key ideas from his work on self-esteem and presented them in relation to issues and approaches in increasing well-being.

The book, “Feeling Good by Doing Good: A Guide to Authentic Self-Esteem and Well-Being,” brings together new work in the fields of self-esteem and positive psychology and shows how to use the information in everyday life, including relationships.

Mruk revives self-esteem as a desirable value, a concept that has somewhat fallen out of favor in recent years after its importance became so overvalued and methods to promote it so hyped as to cause unbalanced and undesirable consequences.

“The book separates authentic self-esteem from the feel-good variety that caused so much trouble,” Mruk said. “That’s the over-the-top sort where everybody gets a medal just for showing up and that can foster narcissism and antisocial behavior. What I call authentic self-esteem is facing life’s challenges in ways that reflect competence and worthiness as an individual.

“It’s not a new concept — the poet and essayist John Milton coined the term in the 1600s. Authentic self-esteem is earned, not given. It’s ‘standing up for that which is just and right.’ To Milton, people who did that in a challenge earned self-esteem. Or if they did not do those things, they lost self-esteem.”

The Oxford University Press said, “Coming to the defense of self-esteem as a valuable and measurable component of good mental health, ‘Feeling Good by Doing Good’ offers a new evidence-based approach to defining, understanding, and increasing what is known as ‘authentic self-esteem.’”

Mruk is a longtime proponent and investigator of positive psychology, which holds that “people want to lead meaningful and fulfilling lives, to cultivate what is best within themselves, and to enhance their experiences of love, work, and play,” according to the Positive Psychology Center. It studies the strengths that enable individuals and communities to thrive.

“Both tended to miss the most important parts of being a human being — the parts concerning meaning, the significance of relationships, aspiring to higher levels of growth and development and being,” he said. “Although its popularity has receded, humanistic psychology offers something the others don’t: the concept of freewill, which cannot be reduced to a computer program or genes, and is the heart of human existence.”

In addition to his research and publishing, Mruk is highly regarded as a teacher. Before being named a University-wide professor of teaching excellence, he received BGSU Firelands’ Distinguished Teaching and Distinguished Scholarship awards. His clinical background includes supervising a methadone treatment program, working as a crisis intervention specialist, staffing a community mental health center, directing the counseling center at St. Francis University in Pennsylvania, and consulting as a psychologist for Firelands Regional Medical Center in Sandusky, Ohio.