"In the fiction writing world, especially when you're a fairly young writer like I still am, the Heinz Prize is this vaguely ludicrous prize that nobody ever expects to win," said Felver, associate chair and undergraduate coordinator in the Department of English. "But, every now and then, lightning strikes."

Felver won the Heinz Prize, which includes a $15,000 cash award along with publication by the University of Pittsburgh Press, for his 14-story collection "The Dogs of Detroit." One of the stories also won an O. Henry Prize, an annual showcase of the year's 20 best stories published in American and Canadian magazines. "Queen Elizabeth" was originally published in the literary magazine One Story.

"Having the connection with Heinz as well as being connected with all of the previous winners but also all of the judges they have had over the years, it's a really cool thing," Felver said.

His life has been a roller coaster ever since winning the Heinz Prize with promotional tours and talks and having his book being reviewed by several publications, including the New York Times. 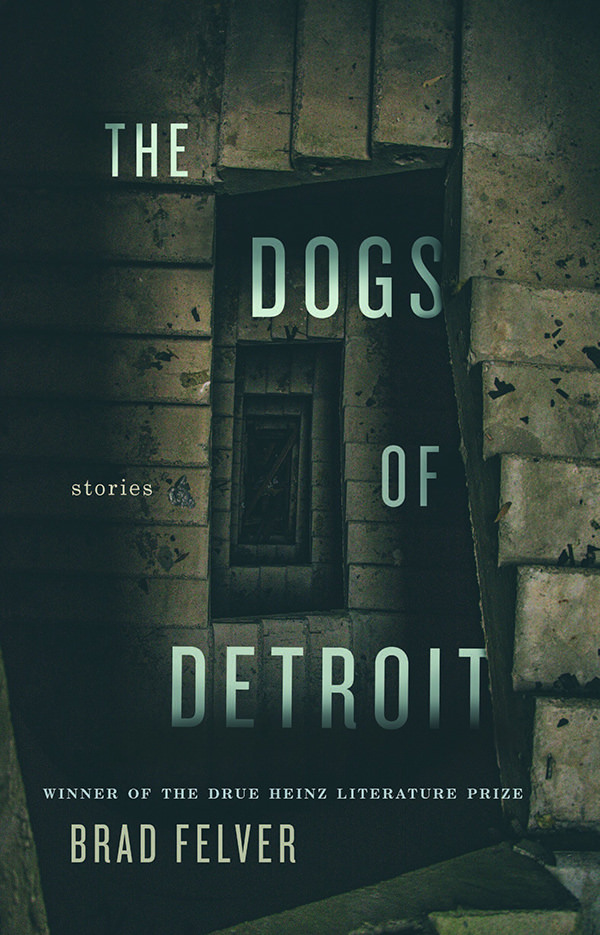 The Dogs of Detroit on Amazon

"The stories in 'The Dogs of Detroit' are frequently about people discovering empathy, and sometimes that's a difficult journey," said Dr. Raymond Craig, dean of the College of Arts and Sciences. "Brad's writing and compassion is first rate, and he certainly deserves the recognition that this book is bringing. As an alumnus, he represents our University and the creative writing program well."

He earned a Master of Fine Arts from BGSU in 2011 and was hired as full-time faculty immediately upon graduation.

As a fiction writer, Felver is fascinated with how people process grief and why, oftentimes, it devolves into violence. That interest led him to producing "The Dogs of Detroit."

"I usually say 'Dogs' is a collection of stories about people processing grief in some capacity or another," he said. "A lot of of times they are stories that live at the confluence of grief and violence. I don't know if I've gotten any closer to figuring it why it devolves, but writing about it is something that I am really interested in."

The New York Times took notice of his penchant for the grief stricken in a review from December: "Felver's families crack, and those left behind, bereft of compassion, turn diabolical in their pursuit of torture: of others and of themselves. … [He] can be inventive with tone, diction and perspective — and heartbreakingly solemn."

"I've always wanted to make sense of why grief and violence seem so connected to each other," he said. "Part of the answer I've come up with is, I think it's easier to be angry or violent than it is to be sad. There's something so pure and raw about sadness that I think humans push it to the side because they'd rather be mad or violent because it's easier somehow. These stories in some capacity — and I'm no psychologist — are trying to explore that."

Through those explorations, Felver has drawn comparisons to such award-winning novelists as Richard Russo and Cormac McCarthy for his dark, yet intricate, storytelling.

"They are two writers who not only have I admired over the years but, as my own writing emerges, I think the influences are pretty clear," Felver said. "I think I've read every word they have ever published.

"They're writers, both Pulitzer Prize winners, who I've spent a good chunk of my life feeling like I know them on an intimate level — I feel like I could teach a class here on either one of them. When I first saw the comparisons, I thought, 'What writer doesn't want to be thrown around with writers of that caliber?'"

Next up for Felver? More promotion for "The Dogs of Detroit," with appearances scheduled for Pittsburgh; Portland, Oregon; Boston; Middlebury, Vermont; and Brooklyn, New York, later this semester.

He also turned in the second draft of his forthcoming novel to his agent on Jan. 1 — his roller coaster ride continues.

To learn more about "Dogs of Detroit," go to Felver's website.