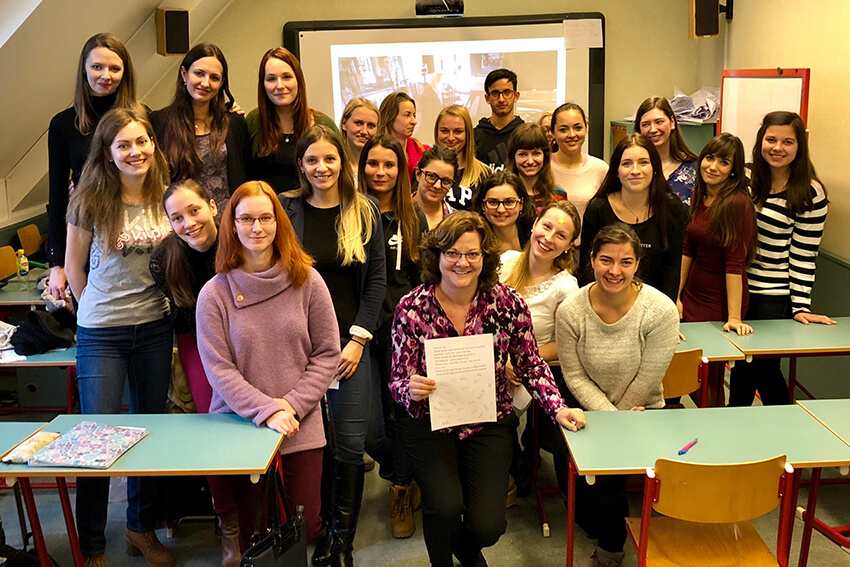 Angela Falter Thomas with students in her Seminar on Pedagogy

Although Palacky University in Olomouc, Czech Republic, is very similar to Bowling Green State University, with about 24,000 students, including 4,000 education majors, Dr. Angela Falter Thomas is finding that life is very different there. The BGSU associate professor in the School of Teaching and Learning is spending the academic year abroad teaching through the Fulbright program. The focus of her project is “Enhancing Pedagogy and Improving Teacher Effectiveness in Elementary Education.”

Her stay is part of a growing BGSU connection with Palacky University. The College of Education and Human Development is hosting Jaromir Mastalir, a scholar-in-residence from Palacky, this year, and is coordinating an education-abroad experience there this summer.

“I wanted a Fulbright Teaching Award because I wanted to be pushed and challenged — to try new things and to get out of my comfort zone,” Falter Thomas wrote in an email. “And without a doubt, those goals have been met! It’s been more difficult (and frustrating at times) than I ever imagined. The language barrier was deeper than I expected. It’s definitely been a ‘reality check in Czech!’ for me!”

Luckily, Falter Thomas is used to getting out of her comfort zone. She is known both for her devotion to her students and for assistance to others in the teaching profession. In 2017, she traveled to remote parts of Peru to work with teachers whom she had met when they came to BGSU as part of the IREX program, which has brought about 20 international teachers to the University each year for six weeks of professional development.

In addition to her teaching, Falter Thomas has had other memorable experiences, such celebrations of the 100th anniversary of the Czech Republic’s founding where she presented proclamations from Bowling Green Mayor Richard Edwards and Ohio Governor John Kasich to Olomouc officials. Her stay in the country began in September with a Fulbright formal reception at the U.S. Ambassador’s mansion in Prague during her orientation. “That night was amazing!” she said.

At Palacky University, Falter Thomas teaches 90 education majors in five courses, all in English, including Educational Theories, Seminar on Pedagogy, Teaching English as a Second Language to Very Young Learners, and two sections of English Language Teaching Methods for Grades 1-5. The learning curve for her and the students has been steep, she said.

“While teaching was very slowing going at first, it’s getting better every week,” she said. “At first, my students did not want to try to talk in my classes. I think they were afraid that I would correct or judge their English-speaking abilities, even though I would have them speak in small groups or with partners first. Now that they know I’m not going to put them on the spot, or make them feel uncomfortable, their confidence is up and they are starting to really open up. 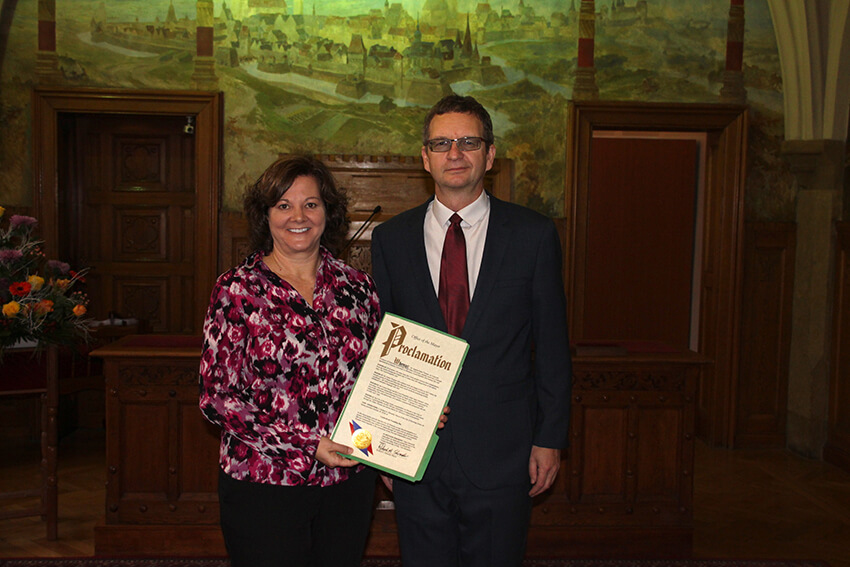 “At first, they were not used to my style of teaching, either. Czech students typically sit quietly and listen for a two-hour class. The fact that I don’t do that, but instead engage them in activities and discussion after a very short presentation was novel to them. They tell me how much they enjoy my classes and how they are learning so much because they are not just listening, but doing.”

However, the active learning model that is so highly valued in the United States has not yet been accepted in the Czech Republic, she has found. Although her students say she is giving them interesting things to think about, they are not sure that, as new teachers, they will be able to use the techniques in their classes.

“They tell me that parents or their headmasters would probably think children were just playing and not learning if they did the things they are learning about in my classes in their schools. For example, I recently led a class session on incorporating drama in a class to help teach English. One student said, ‘If a parent saw children using puppets to learn English, they would think I was not teaching them anything.’”

“I share an office with two other professors, which is great, but my favorite times here in Olomouc are the times before and after classes when I have informal chats with my students. I’ve learned so much from them. They’ve suggested and taken me to restaurants, given me tours of their dorms, translated and made phone calls for me, told me how to find English-speaking movies, and met me at the gym to exercise. They are very interested in our American clothing, movies and music. They want to know about the United States. ‘Are there really free refills in America?’ is a recent question that made me laugh.

“The students are definitely the most rewarding part of my work here on this Fulbright Teaching Award. They’ve issued invitations to come to their towns and villages around the Czech Republic so that I can meet their families and see where and how they live. It’s heartwarming! I always say that travel opens your mind, but more important, your heart.”

In spite of the warmth she has felt from her students, Falter Thomas said she has been surprised by some of the cultural differences between the U.S. and the Czech Republic.

“They are not used to sharing their feelings,” she said. “It’s just not in the Czech culture, and while things are changing, the word ‘love’ just isn’t used, for example. (I was actually told by my Czech language teacher at home to remove that word from my vocabulary because that word is rarely used even in marriage or parental relationships.) Recently, I read the book ‘Love You Forever’ by Robert Munch in one of my classes. A student had tears rolling down her face as I finished the book. It told me she was moved. I then gave her the book to keep.

“At the next class, she stayed after and gave me a box of Czech chocolates for giving her my book. She explained that when I read the book she realized that her parents probably loved her as much as the mother portrayed in the book, but wondered why don’t they just tell her, and that when she’s a mother, she’s going to tell her children how much she loves them.”

The Czech experience has also given her a new appreciation for life at BGSU.

“I will never take BGSU’s state-of-the art technology, our ITS staff, or our student workers for granted ever again,” she said. “Unable to rely on technology like I do at BGSU, I’ve needed to be quite creative. And with their university education costing students the equivalent of about $100 per semester for tuition, it is rare for a student to have a job. Therefore, they do not have student workers at the university. At BGSU, I rely on our student workers to help me assemble things for my classes, but I’m on my own here – and the equipment speed is very slow.”

“Various frustrations and accomplishments have been experienced, and throughout it all, it’s been very empowering.”

While Olomouc, two hours east of Prague by train, is a city of 100,000, “it has a small, college-town feel to it,” Falter Thomas said. “I feel like I’m living in a city the size of Bowling Green. I don’t have a car so I walk or take the tram everywhere I need to go. There are probably 40 restaurants and coffee shops within a 10-minute walk of my apartment, which is located in the historical area and city center of Olomouc. It’s a five-minute tram ride for me to get to the university. The town is quaint and beautiful. Olomouc is often described as ‘little Prague’ and is probably the most amazing city you’ve never heard of.

“So far, I’ve had an incredible experience. And a rich experience like this goes to the soul. It will stick with me forever!”