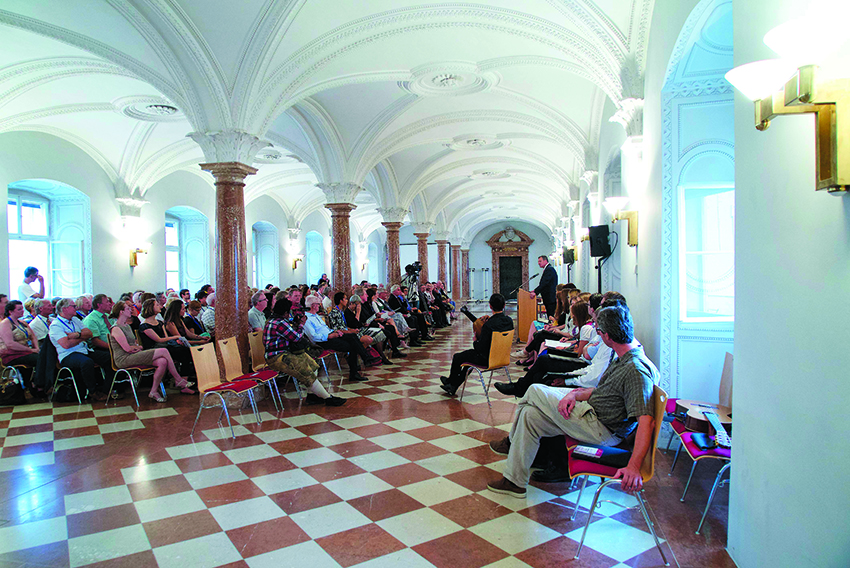 For a half-century, Bowling Green State University and the University of Salzburg have had a partnership.

During those 50 years, nearly 1,500 students have benefitted from the Academic Year Abroad (AYA) exchange program between the two universities.

In June, some 70 of those Salzburg program alumni and many others affiliated with the two programs gathered in Salzburg to celebrate the milestone and to renew the commitment to prepare students to be global citizens through this innovative and immersive education abroad program. 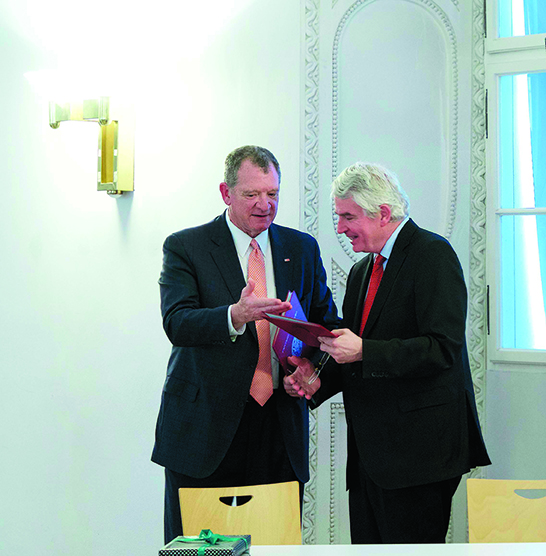 “We are so proud to have this partnership,” BGSU President Rodney Rogers said during the official ceremony in Salzburg on June 7. “Our institution is a little over 100 years old, and at 50 years old this program represents one of our longest continuous study-abroad programs.”

During the celebration, Rogers and University of Salzburg Rector Heinrich Schmidinger signed a new agreement to continue the exchange program.

“It’s important to remember the individuals who make this program what it is,” Rogers said, thanking the current and past faculty members from BGSU who served as directors of the program, including Dr. Geoffrey Howes, professor emeritus; Dr. Margy Gerber, professor emerita; and current German faculty Drs. Kristie Foell, Christina Guenther and Edgar Landgraf, who all attended the reunion.

According to Landgraf, participants at the reunion represented classes from 1970 to 2015. They traveled from the United States and Europe and one person came from Hong Kong. Happy to be back in Salzburg, many of them took time to visit their old dormitories, and favorite beer gardens and restaurants, and some reconnected with the Austrians they met while they were there.

“That tells you how attached they are to the experience they had while studying in Salzburg,” Landgraf said.

The University has a real presence in Salzburg, he said. “We are the oldest and the first university to have a joint study agreement with Salzburg.

“It strikes me to think about how many people at the University of Salzburg and within the city know our program.”

The current mayor of the city, who actually was a former landlord when Landgraf and Howes were directors, spoke at the event. He praised the program and the connections created between the city, the
students and faculty of the program.

Back to the beginning

According to Gerber, who presented some of the history of the partnership during the ceremony, “1968 was a really opportune moment for both universities which were each striving to develop in a new direction.”

At the time, both were looking for ways to expand and grow. However, the towns were very different: Salzburg was a European center of civilization and culture with a medieval fortress and baroque palaces, and Bowling Green was a rural community, developed in the late 19th century. One was surrounded by snow-capped mountains, the other with no hills in sight, only the wide-open horizons of the corn and soybean fields.

Though the communities were very different, the University of Salzburg, which had been reestablished a few years earlier, and BGSU, which was undergoing great growth in the 1960s and ‘70s, were both interested in expanding.

“They used this upward drive and this energy to become more than they were; this was their common ground at that time,” Gerber said.

The idea of the exchange was initiated by two Austrians: Dr. Hedwig Fleischhacker, who later taught in the German as a Second Language program at Salzburg, and Dr. Helmut Pellischeck-Wilsdorf, a professor at Pädagogische Akademie (now Salzburg University of Education). They had spent time in Bowling Green in the mid-1960s as guest professors, and wanted to develop a program similar to the summer program at the Internationale Ferienkurse, in which some BGSU students had enrolled to
learn German. This cooperation continues to this day, although the institution has been renamed and is called Internationale Sommerkurse or ISK, Gerber reported.

The first year, 25 undergraduates from BGSU and Ohio University left their familiar American lives to spend a year in “this totally different culture,” Gerber said. They arrived as a group from northwest Ohio, lived in dormitories and the instruction was completely in German, she said. That first year they paid a total of $1,825 for tuition, room, board and travel.

Aside from the cost of tuition, which now is about $9,000 for the year, nothing has significantly changed over the decades. The cost to study in Salzburg is no different than to study at BGSU, Landgraf said, which is one of the selling points of the program.

In 1970-71, the first Austrian student came to study at BGSU as part of the exchange program, Gerber said. The Austrian students come by themselves and study a variety of subjects that are usually complementary to their studies in Salzburg.

American Cultural Studies is one of the most popular programs, but they can study any field they want. In 1976-77, the AYA program was expanded to include graduate students earning a master’s degree in German.

Master’s students spend the first year in Salzburg, and the second year in Bowling Green, often serving as teaching assistants for undergraduate German classes at BGSU.

Another important development happened in 1986, when the Max Kade Writer-in-Residence program started. Klaus Schmidt, another important person in the development and growth of the AYA-Austria program, founded the writer-in-residence program. With the help of German-American philanthropist Max Kade and his foundation, the literary program was started to bring a writer to the BGSU campus for a semester.

Howes arranged for three of the former Max Kade fellows to read at the 50th anniversary celebration. Josef Haslinger, Elisabeth Reichart and Peter Rosei joined Howes in the bilingual readings of their work
at Literaturachiv Salzburg.

“Many of the alumni I talked to in Salzburg signified the importance of this program and how it changed their lives,” Rogers said. “Bowling Green State University and programs like these are changing lives
for the world.”

Larry Hansgen, a 1979 alumnus who studied in Salzburg in 1976-77 and is now a well-known radio announcer at WHIO in Dayton, said the reunion provided the opportunity to feel connected again with Salzburg, BGSU and Gerber, who was the program director when he was there, and with some of his former classmates.

“Moreover, I was reminded of what that year did to make me who I am today. It was the single most influential event of my life.”

In talking with other alumni, Rogers said they told him that studying in Salzburg for the year taught them a global perspective, gave them newfound confidence and provided new connections with people and other cultures.

McKayla Raines, a current BGSU undergraduate student who studied in Salzburg during the past year, and a speaker at the ceremony, thanked the administrators for including the internship opportunities in the study abroad experience.

In addition to developing professional skills in the internship settings, Raines said, “the program provides a different, firsthand narrative of history.”

The students visit castles, museums and historical sites such as concentration camps and the city of Berlin.

“Learning a language is part of studying abroad, but it becomes more than applied grammar or learning vocabulary,” she said. “Most people who study abroad can think back to a moment in which they connected in the language. These are the moments we fall in love with the language and make us feel connected to the culture and successfully integrated into our host community.”

“Technology has made the world smaller in some regards, and has helped us,” Rogers said. “But until we live together, work together, learn together, and maybe have fun together, we are not truly connected. By doing these things, we grow together, learn to understand one another, and that is about the future of who we are as a world.”