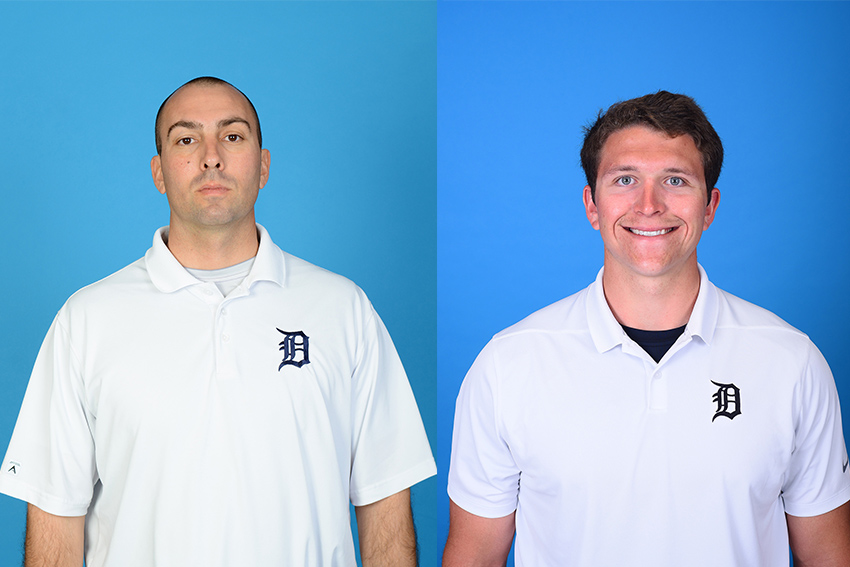 Chris McDonald '00 was named Athletic Trainer of the Year for the International League, which is where the the Toledo Mud Hens, Detroit's Triple-A affiliate, plays. McDonald has been the Mud Hens’ athletic trainer for the past five seasons, and has worked for the Tigers' organization since he graduated from BGSU.

Sean McFarland '17 was named Athletic Trainer of the Year for the New York-Penn League, a short-season league in which the Connecticut Tigers play.

The two share alumni a remarkable connection that goes beyond their recognition and alma mater. McFarland, while a BGSU student, interned with the Mud Hens under McDonald.

“A clinical internship is part of the requirement of our athletic training degree,” said Chris Schommer, BGSU’s athletic training program director. “Sean played rugby while he was a student at BGSU and had an interest in baseball, so we were fortunate to network with Chris McDonald, who was an alumnus of ours already working with the Mud Hens.”

Hands-on clinical internships, and the professional contacts that result, have benefited McFarland and McDonald. When McDonald was a BGSU student, he interned with the Detroit Tigers organization, which later hired him. Similarly, it was McFarland’s internship with the Mud Hens, 17 years later, that led to a full-time position with the organization.

The title of Minor League Athletic Trainer of the Year for each alumnus was awarded by the Professional Athletic Trainers Society, headquartered in Atlanta. Each year, the society recognizes 16 Minor League Baseball members, as well as one Dominican Summer League member.

Mark O’Neal, president of the society, said, “I'm happy to announce PBATS' Minor League Athletic Trainers of the Year. These athletic trainers have had such a huge impact on their organizations, at all different levels. To win an award voted on by your peers is a true honor. I hope that all of these extremely talented athletic trainers take a few minutes to step back and truly appreciate how great of an achievement this is. Overall, this is extremely well-deserved by all winners."

The role of an athletic trainer on a team is important but sometimes less noticed than it should be, O’Neal continued.

“None of us at the Major League level would be able to do our jobs without the hard work throughout all of our entire organizations," he said. "And this starts in the minor leagues. These winners are the future of MLB athletic training and we know the game is in great hands."

McDonald and McFarland are eligible for the  Minor League Athletic Trainer of the Year award, voted upon by the full membership of PBATS. That award will be given at the 2018 Major League Baseball Winter Meetings in December in Las Vegas.