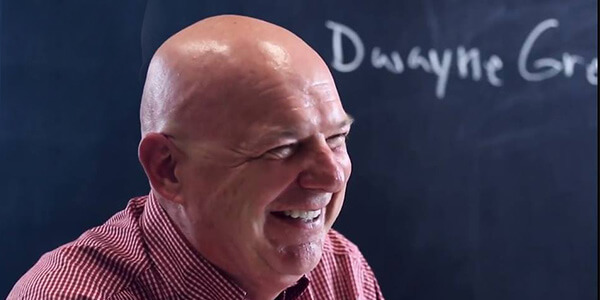 Distinguished Teaching Professor Dwayne Gremler, a leader in the field of services marketing, shares his expertise not only with his students at Bowling Green State University but often with others at universities around the globe. He recently became the first faculty to be designated a Visiting International Professor by the School of Business and Economics at the University of Münster, in Germany.

The dean of the business school presented him the award when Gremler was in Münster teaching a course in Service Management to graduate students, the fourth time he had taught the course in the past three years. View a lively video interview  the university conducted with him.

In addition to the University of Münster, the BGSU professor of marketing has created and taught courses and seminars at many other universities in Germany as well as in Belgium, Switzerland, Spain, England, France, Australia, Sweden and the Netherlands, where he was also a Fulbright Scholar at the Maastricht University School of Business.

Gremler joined BGSU in 2000, charged with developing the marketing department’s emphasis in services marketing. He has raised the University’s profile nationally and internationally, helping students prepare for careers in a growing area, and in the process becoming a sought-after expert teacher and lecturer on the subject. BGSU is likely the only school in the United States with a dedicated specialization combining sales and services marketing.

The BGSU Servicescape Design course he created is the only class of its kind offered in any U.S. business school; he has also taught it in Ingolstadt, Germany. Gremler also teaches undergraduate marketing classes, and is widely published. He is co-author of the leading textbook in the field, “Services Marketing: Integrating Customer Focus Across the Firm,” which is now in its seventh edition and has been translated into five languages. Over the past six years he has given a seminar in Publishing Scholarly Research for Ph.D. students 14 times at 13 different universities abroad.