BGSU, city look back at collaborations 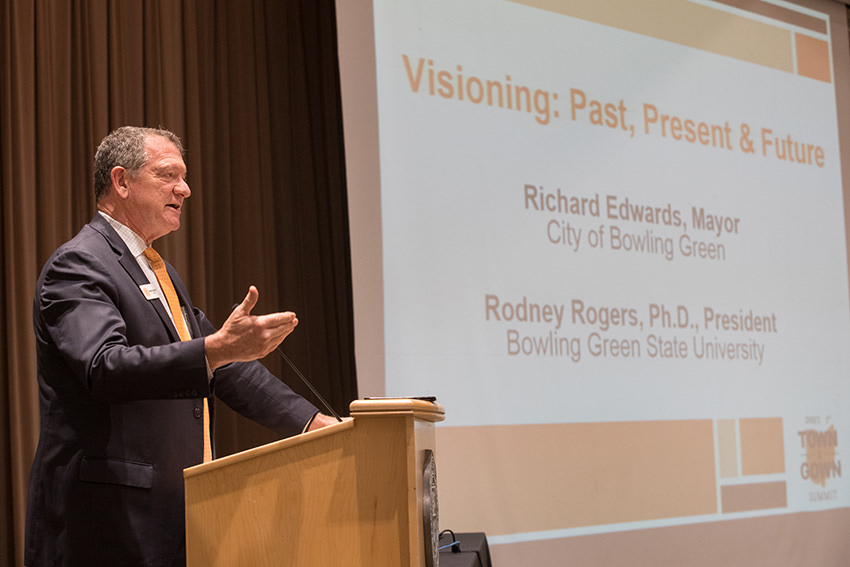 The marriage between a university and a city is a unique partnership that offers opportunity for growth and is mutually beneficial for both parties. Like a real marriage, it takes a lot of work and cooperation to make it a successful collaboration.

Representatives from several colleges and universities and their respective towns from around the state met at Ohio’s 3rd Town & Gown Summit, hosted by Bowling Green State University July 18-20.

BGSU President Rodney Rogers and Bowling Green Mayor Richard Edwards talked about how the city and the University partnered in 2012 and how that process has continued to strengthen the community for our students, faculty, staff, retirees, residents and alumni over the years.

“When I started to reflect on my remarks today, it resonated with me that BGSU and the City of Bowling Green, throughout the years, have found success through partnerships, transparency and open dialogue to address problems and a common belief that our community is best when we both collaborate in an effort to create public good,” Rogers said.

“BG was recently named one of the Best Hometowns in Ohio by Ohio Magazine, and we know with this recognition comes a renewed commitment to keep working on our town and gown relations — we are not done yet in making BG even better. The best days lie ahead because BGSU and Bowling Green are ready to face the challenges and overcome them together to drive economic, cultural and social vitality of the region.”

In 2012, then-president Mary Ellen Mazey and Edwards initiated a visioning process in order to enhance the collaboration between the University and the city.

“The essence of what we are talking about today really began shortly after I became mayor and then-President Mazey was in the midst of her first year as president,” Edwards said. “There was a mutually perceived recognition based on our experiences at other public universities that the timing was right for BGSU and the City of Bowling Green to explore some possible new ways of working together.

“Well, here we are seven years later and the speed and volume of change has been nothing short of amazing.”

That process led to successful initiatives such as “Not In Our Town,” an effective vehicle to promote diversity and inclusion and combat acts of hate and intolerance. Other collaborations between the city and BGSU that developed since then include Wood County Hospital partnering to open the Falcon Health Center in 2013. The Vital Communities Initiative (VCI) launched in 2017. VCI pairs BGSU students and faculty members with Ohio communities to identify and address projects that serve the public good, engage students in high impact learning, impact citizens of our region, and catalyze community and university resources for sustainable, livable, and vibrant communities in our region and beyond.

“President Emeritus Mazey was instrumental in building a robust town and gown approach and we appreciate her leadership,” Rogers said. “We are proud that we are better off today than we were 10 years ago.”