Commencement had a special meaning for eCampus student Dustin Absher, who was the first student to enroll in Bowling Green State University's Air University Associate to Baccalaureate Cooperative (AU-ABC) program.

The online program allows certain Community College of the Air Force graduates to finish their bachelor degree at BGSU. Absher earned a degree in the management and technology program, one of three approved AU-ABC programs at BGSU. 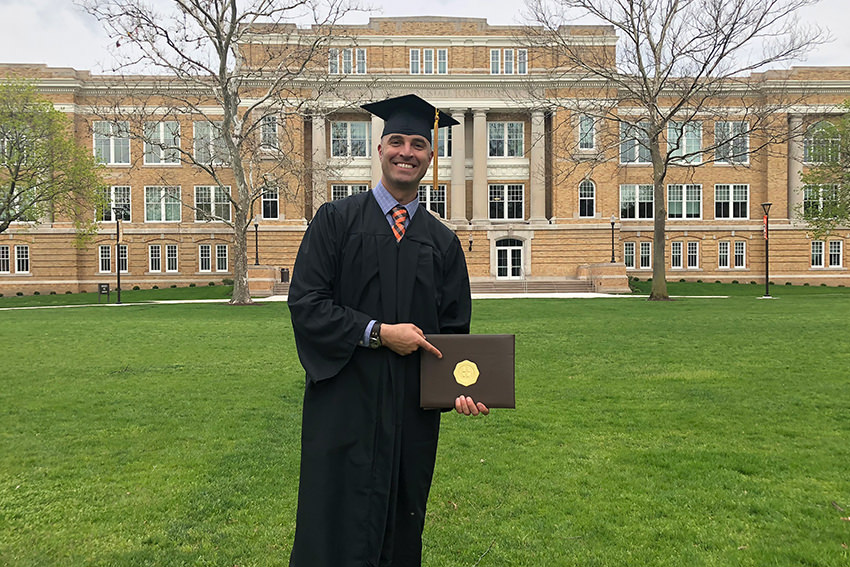 Absher, an Alaska native, made the decision to serve in the United States Air Force directly after high school. Today, he has spent nearly 22 years in uniform.

“I love what I do every day," he said. "I have traveled the world and found myself in many different jobs."

While deployed in Iraq, Absher completed an Air Force associate degree. He began looking for his next challenge and decided on BGSU. Halfway around the world, he had remembered thinking BGSU was a perfect fit for him after a phone conversation with an adviser in the technology department.

Enrolling in fall 2009, Absher's degree was highly anticipated. Nine years pursing an undergraduate degree may seem unrealistic for some, but Absher chose to prioritize family.

“I’ve had to overcome military moves and deployments that always seem to come with military life, but the biggest challenge was ensuring I was always there for my kids,” Absher said. “I basically took one or two classes at a time and put parenting first.”

“I had vision of what the University looked like in my head but finally put that image into reality,” he said.

Much like the Air Force, Absher’s experience at BGSU has taught him valuable life lessons. He encourages future students to remain persistent because life will throw you a lot of curveballs along the way.

“During a few different periods while attending college, I had to step back and focus on different events in my life," he said. "However, when I returned I was really energized and even more excited to get back to class.”

Following commencement, Absher plans to start a small ice-cream business with his wife.