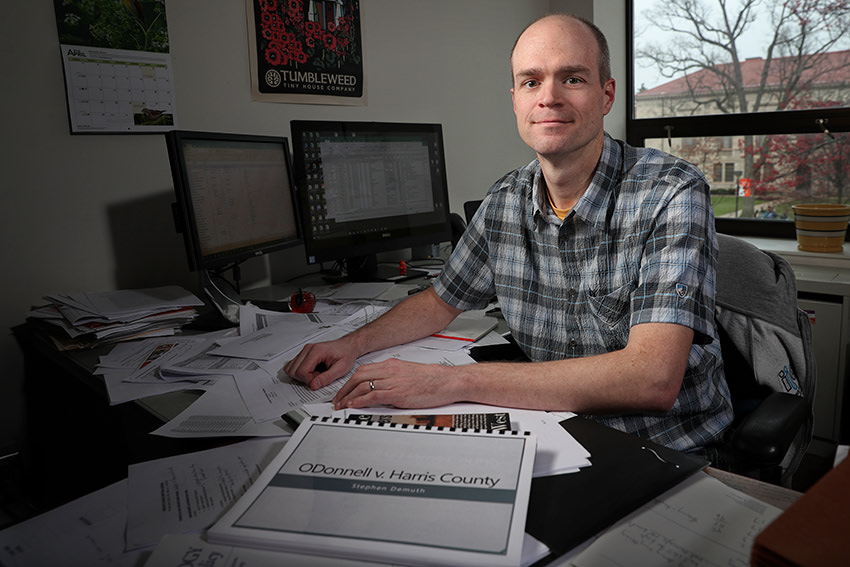 Dr. Stephen Demuth, an associate professor in the Department of Sociology, was an expert witness in a federal civil rights case, ODonnell v. Harris County, that has significant ramifications for the American wealth-based pretrial detention system.

Demuth, who donated his time to research misdemeanor arrest records in Harris County (Houston), Texas, the third largest jail system in the country, said the work he did for the Civil Rights Corps (CRC) of Washington, D.C., helped substantiate that the money bail system in Harris County is unconstitutional. His research and analysis were part of CRC’s class-action lawsuit against the county for misdemeanor bail practices.

In his analysis of the Harris County pretrial process data, he looked at how long it was before misdemeanor arrestees had a probable cause hearing and went before a judge to contest their bail. He found that the time between arrest and the probable cause hearing was usually within 24 hours, but instead of the requisite 48 hours to contest bail in front of the judge, some people were waiting a week or longer.

“A considerable number of people waited longer than the legally allowable time and remained detained simply because they could not afford bail,” Demuth said. “The system was essentially a two-track system ‘designed’ to elicit guilty pleas from poor people.”

He reported that more than 40 percent of misdemeanor arrestees were jailed until trial because of their inability to pay money bail, even though the system presumes innocence until proven guilty.

In February, the U.S. Court of Appeals for the Fifth Circuit upheld the original April 2017 ruling of the U.S. District Court that found the practice violated the arrestees’ right to due process and equal protection.

“The system of wealth-based detention allows people with money to be released pretrial and achieve better outcomes than those who cannot afford money bail and remain detained,” he said.

“Bail is not meant to punish,” Demuth said, but only to ensure a person returns to court and does not reoffend.

However, there is not a lot of evidence that indicates these misdemeanor arrestees are a flight or crime risk.

“There is no relationship between money and flight or the likelihood that they will commit another crime,” he said.

Instead, money is connected to freedom and worth, he said.

He sees the rulings in the district court and the U.S. appeals court as “a historic victory in the fight to end wealth-based pretrial detention.”

Demuth, who is also the director of the doctoral program in sociology at BGSU, admits that his part as an expert witness has forever changed his life.

“Like many professors, I often get discouraged about the impact of my work outside the traditional publication and media pathways,” he said. “This was an opportunity to make an immediate impact in the lives of people suffering from a discriminatory criminal justice system.”

Since the initial ruling a year ago, almost 10,000 indigent pretrial arrestees have been released in Harris County who would have otherwise been detained because of their poverty.

Being able to provide a service in this fight for justice added meaning to his work and renewed his commitment to his area of research which focuses on how race and ethnicity affect the likelihood of becoming involved with the criminal justice system and shapes treatment within the system.