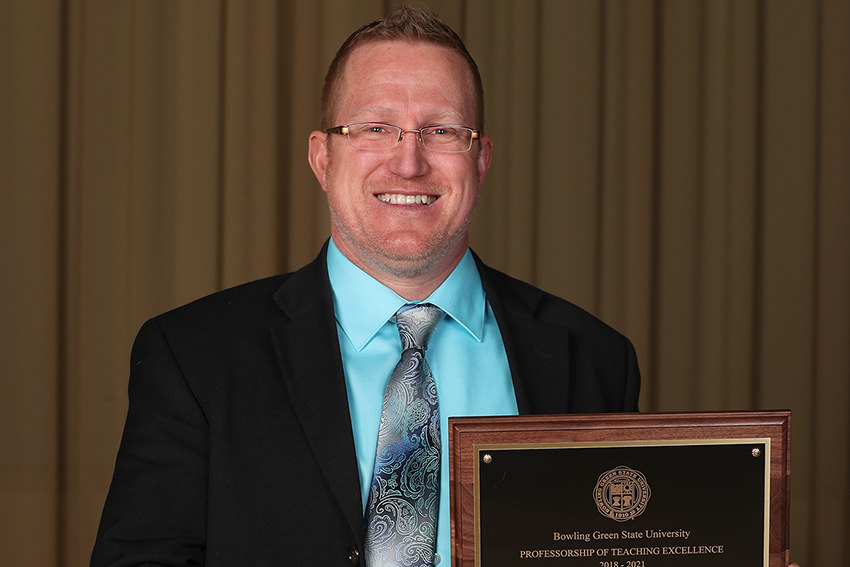 One of the best teachers in a department of strong teachers, Dr. Neal Jesse has been outstanding throughout his entire time at Bowling Green State University. The University recognized his expertise, energy and commitment to students by awarding him the Professorship of Teaching Excellence at the 2018 Faculty Excellence Awards on April 9.

The honor is designated for faculty members who hold the rank of full professor and whose extraordinary achievements as effective teachers in their discipline or in interdisciplinary fields deserve special recognition. Jesse will hold the title for three years and receive an annual stipend of $5,000, which includes $2,000 per year for professional development.

Jesse is highly regarded for the breadth and depth of his contributions to teaching. Since joining the Department of Political Science in 1999, he has taught a wide range of classes, including introductory/BGP courses, quantitative literacy courses, upper-level courses in comparative politics and international relations, graduate seminars, and courses outside the department, said nominator Dr. Marc Simon, acting chair of political science.

“He has consistently scored very high on teaching evaluations in every format, from small seminar to large lecture. Political Science is a department with many excellent teachers, and Dr. Jesse has always been regarded as one of our best,” Simon said.

Jesse has “utilized a wide range of teaching styles and learning pedagogies, and been very active in course development in more than one discipline and program, including political science, Honors and international studies,” wrote nominator Dr. David Jackson, professor of political science. Also, in collaboration with Ann Light, he designed the entire curriculum and all of the courses for the online Bachelor of Science in fire administration offered through the political science department.

“Evidence of Dr. Jesse’s use of a wide range of teaching styles and pedagogies includes his commitment to use the best teaching method possible depending on the size of the course and the learning objectives,” Jackson said. “In large survey courses, he tries to impart as much information as possible while still encouraging active learning. In focused upper-division courses he engages the students into active learning assignments to establish deeper learning (e.g., synthesis and integration). In Honors courses he focuses on critical thinking skills, which relies on drills, peer evaluation, and peer-to-peer exercises. In methods/statistics courses, he uses homework with problem drills and problem-solving exercises.”

In his British Politics course, he uses a simulation in which students engage in a focused, four-week simulation of the Northern Irish Assembly. Students are assigned their roles ahead of time, must complete a research paper on their assigned role, are given secret extra credit objectives to incentivize good role-play, and then spend four weeks debating issues in a simulated assembly.

“He believes that critical thinking has to be practiced in order to be learned, thus students need to develop these skills working with other students who are at their same level of development,” Jackson said.

“Also, not surprisingly Dr. Jesse has already won awards for teaching,” Jackson added. He has been nominated three times for the Master Teacher Award and has received the Faculty Excellence Award in the College of Arts and Sciences from Undergraduate Student Government.

“I have always been impressed by the energy and passion that he brings to all of his classes. He is able to make even mundane issues and concepts seem interesting,” Simon said. “This rubs off on students, and motivates them to achieve the high standards he sets (he is known as a tough grader). Dr. Jesse has continued to improve his courses over time.”

He has also given substantial time to do many independent readings courses with students over the years. These sometimes relate to his own research agenda, and have resulted in co-authored publications with undergraduate and graduate students.

Jesse’s influence on his students continues through their lives. As former student Brian Ahrn wrote, “Dr. Jesse’s positive influence has helped me to become the successful teacher I am. Like Dr. Jesse, I make it my mission to have the same enthusiasm and passion for the classes I teach. I also take the time necessary to do whatever it takes to ensure my students are learning the appropriate content of my classes. I can say, without reservation, that I would not be the teacher I am today without the positive influence of Dr. Neal Jesse.”

Jesse’s dedication and achievements in teaching are all the more remarkable given his high productivity in research and service, Simon said.

“Dr. Jesse’s career is a model for what we seek at BGSU — someone who consistently excels in all three areas.”