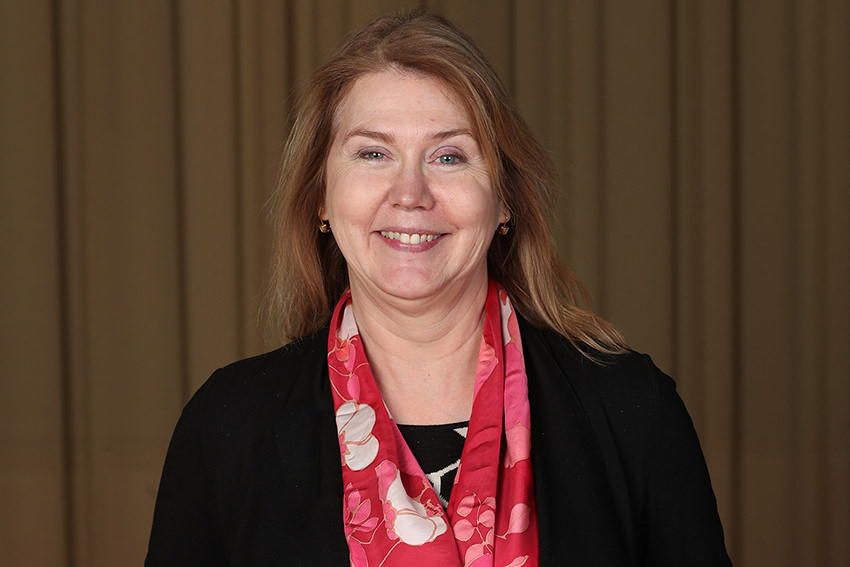 Biologist Dr. Moira van Staaden has pursued her teaching and research in communication, social systems and the interplay among them from her native South Africa to Europe to the United States, and she has gained a reputation as a top scholar in her field of neuroethology. But in response to what she has observed over her career, and in the past 19 years at Bowling Green State University, she has made the professional decision to also dedicate herself to imparting the joy and methods of science to students and to improving its pedagogy for faculty. Her goals are to encourage and increase study in the STEM disciplines and to develop and share research-based instructional practices for teaching them. In this she has become an internationally recognized expert in STEM education.

In recognition of her extraordinary efforts and achievements, BGSU has awarded her a 2018 Professorship of Research Excellence. The title is conferred upon members of the faculty already holding the rank of professor and who have established outstanding national and international recognition through research and publication or creative/artistic achievement in their disciplines. The title is for a period of three years, with an annual stipend of $5,000 — a $3,000 salary stipend and $2,000 for professional development.

Although improvement in STEM education is a national priority, it had not been a focus at BGSU until van Staaden undertook to bring it to the forefront. In 2008, she received her first major STEM education grant, of $2.5 million from the National Science Foundation (NSF), to develop the Science, Engineering and Technology Gateway Ohio (SETGO) program in collaboration with Owens Community College, followed by three additional grants. SETGO was designed to help students from two-year colleges transition to four-year universities by providing them intensive, hands-on, authentic research experiences and mentorship from faculty. More than 200 undergraduates participated. It also created the Art of Science Community, for 700 students, and as a result, student participant retention went up significantly, and time to graduation went down, by almost a year.

To share their results, van Staaden and her research collaborator Dr. Dianne Raubenheimer, director of the Office of Planning, Research and Assessment at Meredith College, gave three presentations at national and international conferences of their findings on research-based instructional methods. They also published two peer-reviewed journal articles, which altogether brought more attention to their work.

Having established a strong reputation as a thought leader in STEM education, van Staaden turned her attention to the growing decline in students’ quantitative literacy and logical reasoning skills, without which a career in STEM is impossible. She applied to the NSF for another grant to address the issue, and received nearly $3.1 million — even more than the $2.9 million she had requested — over five years.

“This reflects the importance with which the NSF viewed the project,” said Dr. George Bullerjahn, professor of research excellence. “It is clearly addressing a key, nationwide STEM priority.”

Partnering again with Owens Community College, she launched Project SEA Change, an interdisciplinary, cross-institutional effort to improve student skills by encouraging faculty to bring the same creativity they employ in their research to their classroom teaching. The project is designed not only to improve teaching and spur student interest by using research-based teaching practices, but also to transform the institutional culture to embrace change, especially in STEM teaching.

Meanwhile, van Staaden maintains a vigorous research agenda of her own, in her specialty of neuroethology, the study of animal behavior from an evolutionary, biological perspective. Today, she works with collaborators at BGSU, Oak Ridge National Laboratories and Lawrence Livermore Berkeley National Laboratory, to identify causative agents and therapeutic interventions for addiction and learning disorders such as dementia. She is currently editing a book on drug-sensitive reward and organizing a symposium on drug addiction for the International Society for Behavioral Neuroscience.

Among her early work were explorations of the evolution of hearing organs in an ancient type of grasshopper and of the evolution of brain diversity, using cichlid fish. Her research resulted in landmark publications in top journals such as Nature and the Proceedings of the National Academy of Sciences, along with the top specialty journals in her field.

In addition to promoting science education, van Staaden contributes to the larger science community. She has served on six NSF review panels in the past few years and in 2015-16 was a Visiting Scholar in Education at the Harvard Graduate School of Education.