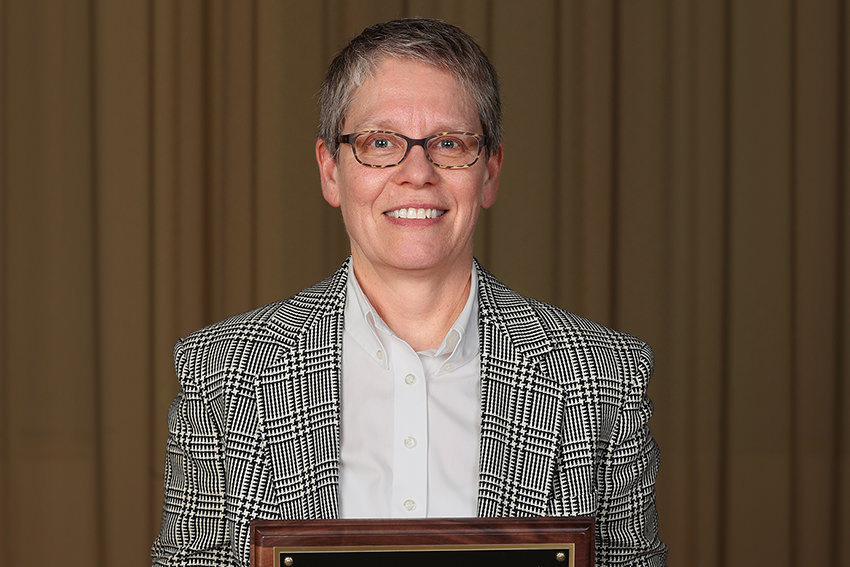 Janet Ballweg’s career as a printmaker has followed an upward trajectory over her 27 years at Bowling Green State University. As a faculty member and an artist, she is a model for students. Her impact on the art world manifests in the ongoing recognition she receives for her work. In support and acknowledgment of her achievements, the University named her a 2018 Professor of Creative Arts Excellence. She was honored at the annual Faculty Excellence Awards on April 9.

The title is conferred upon members of the faculty already holding the rank of professor who have established outstanding national and international recognition through research and publication or creative/artistic achievement in their disciplines. It is for a period of three years with an annual stipend of $5,000 — a $3,000 salary stipend and $2,000 for professional development.

Ballweg is a prolific artist. She has participated in more than 200 juried, invitational and solo exhibits across the country and the world since 2000, and her work is included in more than 60 permanent collections.

As head of the printmaking area in the School of Art, “through her innovative studio practice and her dedication to sharing it with students and colleagues, Janet has made herself central to conversations reassessing the nature and future direction of her discipline,” School of Art Director Charlie Kanwischer said. “Hers is an expansive vision built on an opportunistic, non-defensive negotiation with technology. She possesses a rare skill, evident in everything she does in the studio and in her classroom, to reconcile seemingly opposed concepts and techniques.”

Her blending of traditional print processes with leading-edge digital and photographic technique has won Ballweg numerous awards, including a Best in Show at the 2016 Mid-America Printmaker’s Council Members Exhibition, and also the attention of colleagues at other institutions. A nationally and internationally known printmaker, she is often invited to lecture and hold workshops, and has been a visiting artist in Detroit; Richmond, Virginia; China; Italy; and numerous other places. She also often serves as a juror and consultant. Her prints have appeared in and on the covers of a multitude of journals and other publications, and her work is frequently cited by others.

Never resting, she continues to explore new techniques and avenues of artistic communication.

“She may now be doing the best work of her career,” Kanwischer said.

She is engaged in the production of a series of screen prints that she describes as exploring “the ways in which patterns shape our lives and the ways in which constructions of memory, experience and gender are embodied in the domestic landscape.” Subtly suggesting the subtexts she wishes to convey, “sensations of something hidden yet important,” the prints are deceptively simple and do not flaunt their sophisticated technical underpinnings.

Dr. Raymond Craig, dean of the College of Arts and Sciences, remarked on the way in which her use of multiple techniques and media in prints draws viewers into the work with very comfortable imagery, “but the effect ultimately is to pull the viewers into an analysis of the objects represented and their relationship to the linguistic representation of theme that runs across all the images. It is extraordinary work.”